A charivari, also variously called a skimmington ride and riding the stang, is a historical folk custom expressing public disapproval of personal behavior.  Domestic violence was a common motive for a charivari.  A man who beat his wife in southern England early in the nineteenth century could awaken at night to a noisy crowd, dancing in a frenzy around a bonfire outside his door.  They would be “a motley assembly with hand-bells, gongs, cow-horns, whistles, tin kettles, rattles, bones, {and} frying-pans.”  An orator would identify the wife-beater’s house with a signal chant:

Sometimes the crowd would carry an effigy of the targeted man to a substitute punishment, e.g. burning.  Sometimes the man who physically abused his wife would be abused by the community:

Old Abram Higback has been paying his good woman;
But he neither paid her for what or for why,
But he up with his fist and blacked her eye.

Now all ye old women, and old women kind,
Get together, and be in a mind;
Collar him, and take him to the shit-house,
And shove him over head.

And if the nail happens to crack,
Down with your flaps, and at him piss. [2]

The practices of charivari varied across time and place.  But no evidence exists of a charivari that targeted a wife who had been beaten by her husband.  If the husband beat the wife, the husband was the subject of the charivari. 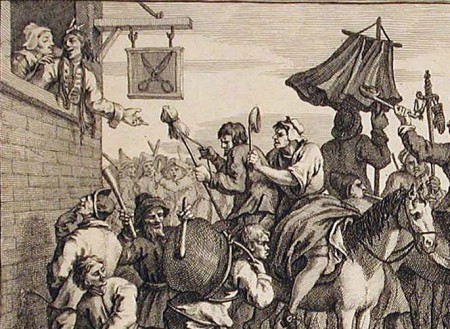 The husband, in contrast, was also the subject of the charivari if he was beaten by his wife.  In France about 1400, husbands beaten by their wives were “paraded on an ass, face to tail.”[3]  In England, a mural in Montacute House (constructed about 1598) shows a wife beating her husband with a shoe and then a crowd parading the husband on a cowlstaff.  Samuel Pepys recorded in his diary, 10 June 1667: “in the afternoon took boat and down to Greenwich, where I find the stairs full of people, there being a great riding there to-day for a man, the constable of the town, whose wife beat him.”[4]  A Frenchman who traveled in England reported in 1698:

The figure of straw, crowned with horns, mocked the beaten husband.  Another example describes a neighbor taking the punitive place in the charivari procession on behalf of the husband.[6]  That’s the most probably meaning of the phrase “some kind neighbour of the poor innocent injur’d creature generally performed this ceremony.”  The public intention seems to have been to beat in public husbands who were beaten within the home.  Having a kind neighbor limited the public beating to material and personal representations.

Within the home, men and women abused each other. Public punishment for domestic violence, in contrast, seems to have fallen mainly on men.  The academic literature on charivari for a beaten husband has emphasized ideology.  A wife beating her husband exposes the unreality of patriarchal ideology.  Publicly punishing the beaten husband attempts to protect ideology from reality.  Focusing on who are punished — men — focuses on the painful, personal reality.

[4] Early in the nineteenth century, Richard Neville (later Lord Braybrooke) published Pepys’ Diary and added a note to Pepys’ description of a charivari:

Malcolm (“Manners of London”) quotes from the “Protestant Mercury,” that a porter’s lady, who resided near Strand Lane, beat her husband with so much violence and perseverance, that the poor man was compelled to leap out of the window to escape her fury. Exasperated at this virago, the neighbours made a “riding,” i.e. a pedestrian procession, headed by a drum, and accompanied by a chemise, displayed for a banner. The manual musician sounded the tune of “You round-headed cuckolds, come dig, come dig!” and nearly seventy coalheavers, carmen, and porters, adorned with large horns fastened to their heads, followed.

The “chemise, displayed for a banner” probably was a representation of the woman who beat her husband.  On the other hand, calling men “cuckolds” is a shaming of men. Like men beaten by their wives, men who were cuckolded were also subject to charivari.