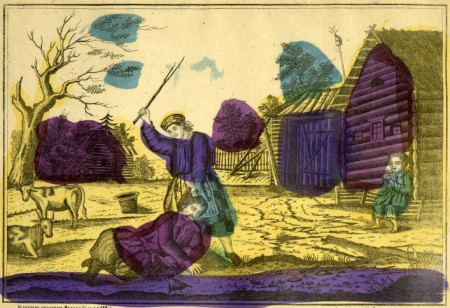 Wives and husbands verbally and physically abusing each other has been a sad feature of human life throughout recorded history.  In medieval Europe, communities through a shaming ritual called charivari publicly punished men for beating their wives.  They also through charivari publicly punished men for being beaten by their wives.  Since medieval times, domestic violence against men has come to be largely ignored.  Men who are victims of domestic violence are now punished by denial rather than by charivari.  Now a U.S. Marine gets beat up by his wife and then arrested for domestic violence.  He poignantly pleads, “What do you do when a girl hits you?”

Le Vilain Mire, a thirteenth-century Old French fabliau, represents imaginatively charivari for domestic violence.  A rich peasant won with his wealth the hand of an impoverished knight’s daughter.  Fearing that he would be cuckolded while he was out working in the fields, the peasant resolved to beat his wife in the morning so that she would weep all day and not be attractive to men.  When he returned home in the evening, the peasant planned to make up with her and enjoy marital life.  After getting beaten twice, the wife ingeniously prompted the king’s messengers to beat her husband repeatedly.  The king’s messengers found the husband, beat him for the first time, and then “they mounted him on a horse, his face to the tail, and led him to the king.”[1]  That’s the characteristic charivari position of a man being publicly shamed for beating his wife, or getting beaten by his wife.  Crediting the wife’s ingenuity in securing two strong proxies, the husband was positioned for a double dose of punishment in this fabliau.

Domestic violence appears in farce in the recently published book The Farce of the Fart and Other Ribaldries.  This book provides English translations of twelve medieval French plays.  In the preface, the author declares:

there are aspects of this repertoire that are distinctly unfunny and worthy of our serious exploration.  The recurring theme of domestic violence is one of them, in which many a playwright goes so far as to make the preposterous suggestion that women were the ones who regularly brutalized their husbands. [2]

That’s unfunny.  It’s also farcical.  Women and men living together brutalize each other, usually not regularly, but more times than is right, which is never. Many social-scientific studies indicate that women are as physically aggressive, or more physically aggressive than men in their relationships with male intimate partners. Many academics now fervently believe that no essential gender differences exist, except that men are more evil and that men deserve to be incarcerated in vastly gender-disproportionate numbers. They don’t believe that domestic violence among intimates is commonly mutual.

Medieval fabliaux and farces come closer to truth about domestic violence than does much modern scholarship.

Enders, Jody. 2011. “The Farce of the fart” and other ribaldries: twelve medieval French plays in modern English. Philadelphia, Pennsylvania: University of Pennsylvania Press.