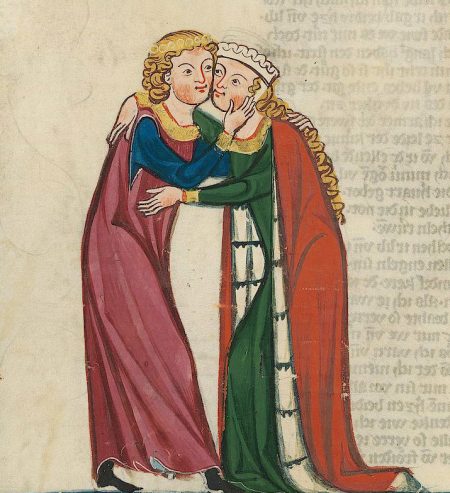 At a public banquet honoring the virgin herald Hysminias, the serving maiden Hysmine whispered welcome to him. She served him a cup of wine. Thirsty, hot, and sweaty, Hysminias relished the delightful drink. Later in the dinner, Hysmine came again to serve Hysminias. She said in quiet voice:

You are receiving the cup from a maiden with the same name.

She then pressed her foot against Hysminias’s foot. Later, she again came to him with a cup of wine. But when he grasped it, she held on. Befuddled, Hysminias said to her:

Do you not want to give it to me? What do you want to do?

She immediately released the cup to him. She blushed and stared at the ground. Her parents looked at her angrily and reproachfully. Yet later, she came to Hysminias, put a cup of wine into his hands, and looked longingly into his eyes. With her finger, she pressed his finger to the cup and moaned and sighed.

After the banquet, the situation became even more serious. Under the conventional protocol for showing hospitality, guests’ feet were washed before they went to bed. The maiden Hysmine accompanied two servants to the bedroom of the herald Hysminias and his colleague Kratisthenes. Hysmine helped the servant wash Hysminias’s feet. She embraced his feet, squeezed them, and kissed them. She scratched his feet with her fingernails and tickled him. She then gazed at him intently, smiled, and nodded. Kratisthenes had his feet washed without any embracing, squeezing, kissing, scratching, gazing, smiling, or nodding. In short, Hysminias received seriously disparate foot-washing treatment.

Men suffer from many forms of sexual harassment. Sexual harassment of men usually doesn’t involve raping a man. Women in positions of authority sometimes pressure subordinates for sex and sometimes respond with false accusations of rape if they are refused. But sexual harassment of men, like sexual harassment generally, is today understood to cover a much broader range of behavior. Women who wear tight pants in places where men might inadvertently see them commit sexual harassment under today’s standards. Women who expose breast cleavage that men might inadvertently see sexually harass men under today’s standards. Classical Latin literature makes clear that a woman in the kitchen, stirring a pot and wiggling her hips suggestively, can greatly disturb a man. In this case, Hysminias was working as a herald. Hysmine was on the job as a serving maiden. With her actions, to say nothing of her gazing in his eyes intently, Hysmine surely sexually harassed Hysminias under today’s enlightened standards of behavior.

Hysmine’s behavior seriously and adversely impacted Hysminias. The following night Hysminias suffered frightful dreams. With his heart pounding in his chest and grasping for breath, he sat up in his bed and cried out to his colleague Kratisthenes, “I am ruined.” Hysminias could no longer perform appropriately his job requirements as herald. Hysminias felt as if his ribs were being gouged out, as had earlier happened to Adam before a great fall. Hysiminias didn’t feel a crown of thorns on his head. He felt as if he were sleeping on whole bed of thorns. He also perceived that he was being roasted on coals. Many faithful early Christian martyrs suffered similarly. Damages to Hysminias figured as high as complete job disability and extremely painful death.

I touch her hand and, although she tries to withdraw it and conceal it in her tunic, nevertheless I prevail. I draw it up to my lips, I kiss it, I nibble it incessantly; she pulls away and curls up on herself. I clasp her neck and set my lips on hers and fill her with kisses and exude passion. She pretends to withdraw her lips but bites my lip passionately and steals a kiss. I kiss her eyes and suck all passion into my soul, for the eye is the source of love. Then I find myself at the girl’s chest; she puts up a stout resistance, curls up completely and defends her breast with her entire body, as a city defends a citadel, and fortifies and barricades her breasts with her hands and neck and fist and belly; and further down she raises her knees as she shoots off a tear from the citadel of her head, all but saying, “Either he loves me and will be softened by my tears, or he doesn’t love me and will shrink from battle.” I am rather ashamed to be defeated and so I persist more violently and at length I am almost victorious but find defeat in my victory and am utterly undone. For the moment my hand got to the girl’s breast lassitude invaded my heart.

I was in pain, I was in anguish, a strange trembling came over me, my sight was dimmed, my soul softened, my strength weakened, my body grew sluggish, my breath choked, my heart beat faster and a sweet pain poured over my limbs with a kind of tickling sensation and an ineffable, unspeakable, inexpressible passion took possession of me. And I experienced, by Eros, what I had never experienced before.

The subsequent need to wash Hysminias’s bedsheets was only a minor cost compared to the harm to him. Hysminias had been so traumatized by Hysmine’s sexual harassment of him that he dreamed that he attempted to rape her. Leading literary scholars now regularly castigate fictional men for fictional rape. As certain as a Rolling Stone fraternity gang-rape exposé gathers no facts or a college sex-tribunal will be a kangaroo court even for an unsupported allegation of stolen panties, literary scholars today will condemn a fictional man for fictionally dreaming about raping a fictional woman. In our culture, leading news sources report astonishing tales that a large share of men rape their wives. Hysminias’s dream surely cannot merely end with a nocturnal emission.

Because of his dream, Hysminias is exposed to the emotional harm of harsh disparagement and condemnation by leading literary scholars world-wide. A literary character could hardly find himself in a more harrowing situation. For Hysminias, that’s a direct result of Hysmine’s sexual harassment of him.

Wounded by Eros’ sharp soul-destroying
bows to the depth of his heart, Hysminias
urges young people to flee the unruly onrush of passion
with vigour for it is the cause of harm.
Whatever passion Eros induces with his gaze, may I escape his goad.

Solomon, writer of odes and psalms,
declared in his scriptural proverbs,
“Never, my son, let desire for a woman
overcome you, except for your own wife.
For even if sweetness flows from her lips
at first, even if she seems to you, my son,
as sweet as any honey,
later — alas — she will induce bitterness,
taming your heart with incessant arrows.”

Eumathios (or perhaps Eustathios) Makrembolites wrote Hysmine and Hysminias in twelfth-century Constantinople, probably between 1145 and 1160. Makrembolites wrote this novel in Greek prose in eleven books. It is closely modeled on Achilles Tatius’s Leucippe and Clitophon. Hsymine and Hysminias has survived in 43 manuscripts. It was the most popular and influential Byzantine novel.

[image] Woman and man (Goesli von Ehenhein of Strasbourg) embracing. Illustration from Codex Manesse, Zurich, made between 1305 and 1315. UB Heidelberg, Cod. Pal. germ. 848, fol. 308v. Thanks to University of Hiedelberg and Wikimedia Commons.

6 thoughts on “how Hysmine enthralled Hysminias: hazards of herald service”