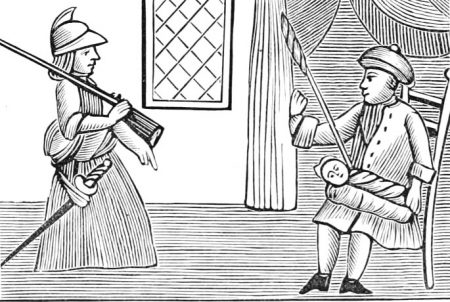 Those who have been reared with weapons and those experienced in fighting
must either stain their hands with enemy blood
and gird on a tunic bespattered with their slaughter
or fall valiantly and stout-heartedly
after having striven mightily with the opposition. [1]

Another twelfth-century Byzantine novel makes explicit the connection to Spartan mothers. A man fighting to save a damsel in distress declared:

the maiden was not torn from my hands, with me intoning “With my shield or on it,” like the Spartan mother. [2]

The horrible sayings of the Spartan mothers, urging and glorifying violence against men, became proverbial in Byzantium.

As has been the case throughout history, some truly heroic, socially conscious persons defied the deplorable devaluation of men’s lives. Another despicable passage in a Byzantine novel hints at recalcitrant men’s resistance:

It befits a soldier either to act valiantly
or to fall and not to have as witness to his shame the sun
and the all-nurturing earth and the moon.
It is a fine memorial for soldiers
when they die as heroes in battle, and not in bed. [3]

Achilles, with the help of his mother Thetis, wisely made a fine, but failed attempt to avoid fighting in the idiotic Trojan War. Yet men should not have to pretend to be women in order not to be treated as disposable humans.

Andronikos I, a Byzantine nobleman who became the Byzantine emperor in 1183, defied the Spartan mothers’ teaching and focused on manly passion in bed. About 1161, Andronikos was sent to fight against the Armenian forces of Thoros II in Cilicia. Soon after he was enmeshed in the horrors of war there, Andronikos had an epiphany:

Not many days elapsed before Andronikos reckoned the slaughter of men, battles and warfare, the war trumpet, and Terror, Rout, and Ares, who is the bane of mortals, as secondary and incidental. Setting aside the deeds of war, he gave himself over to the orgiastic rites of Aphrodite. … Andronikos, notorious for being love-smitten, laid down his shield, removed his helmet, completely doffed his military attire, and deserted to his lover Philippa in Antioch. Making his way there, he preferred the joys of the Erotes to the armaments of Ares, although he did not card wool or devote himself to the loom and twist the distaff for Philippa as did Herakles when he served Omphale as her slave. His beloved was the daughter of Raymond of Poitiers and sister to his cousin Manuel’s wife whom the emperor had married not long before. [4]

Andronikos used his sword intelligently, shrewdly, and with imaginative manliness:

Once when he was lying in the Eudokia’s embraces in his tent at Pelagonia, her blood relations, on being so informed, surrounded the tent with a large number of armed troops. They stood guard over the exit, intending to cut him down on the spot. Eudokia was well aware of this plot, even though her mind was occupied with other matters. She had either been alerted by one of her kinsmen or warned in some other way of the ambush planned against her corrupter. Contrary to the nature of women, she was quick-witted and gifted with sagacity. While in the embraces of Andronikos, she informed him of the plot. Shaken by what he heard, he leaped out of bed and, girding on his long sword, deliberated on what he should do. Eudokia proposed to her lover that he don female attire and that she should command aloud and by name one of her chambermaids and maidservants to fetch a lantern to the tent. As soon as the ambushers heard her voice, he should exit and make his escape. However, he was not convinced by her persuasive argument. He feared that he might lose his way, be taken captive, and be led before the emperor, ignobly dragged by the hair, and, worse, made to suffer a womanish and inglorious death. Hence, unsheathing his sword and taking it in his right hand, he cut slantwise through the tent, and jumped through the slit he had cut with his naked sword. In one mighty bound, like a Thessalian, he hurdled over the barrier which chanced to be standing in front of the tent and the space occupied by the stakes and ropes. His ambushers were left agape. [5]

Used properly and with delightful imagination, a man’s sword is a wonderful instrument.

For more than two millennia, young men studying classical Greek literature have been uncritically taught the deplorable sayings of the Spartan mothers. The world must be turned upside down. The world must come to recognize the reality of violence against men and turn to valuing men’s lives humanely. 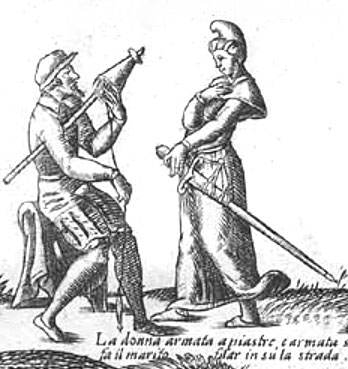 [2] Eumathios Makrembolites, Hysmine and Hysminias 7.14.1, from Atticizing Greek trans. Jeffreys (2012) p. 232. For some background on this Byzantine novel, see the notes to my post on how Hysmine enthralled Hysminias. On the Spartan mothers’ saying becoming proverbial, id. n. 223.

[4] Niketas Choniates, Annals 138-9, from Greek trans. Magoulias (1984) p. 79. I have made non-substantive changes to Magoulias’s translation to improve its accessibility. Men in Byzantium were disparaged for being skillful in sexually engaging with women. For example, according to the Byzantine historian Doukas, John V (1341-1391), the son of Andronikos III, at age twenty-five had “shown no skill or expertise except in dealing with beautiful and shapely women and how to ensnare them.” Garland (1996) p. 13.

[5] Choniates, Annals 104-5, trans. Magoulias (1984) p. 60. Magoulias’s translation significantly tones down the eroticism in Choniates’s account. See note [14] in my post on Octavian’s ass-driver and ass Actium statues. Kaldellis (2009) p. 94 recognizes the “very masculine sexuality” figured in Andronikos jumping through the slit that he cut with his naked sword. Above I’ve drawn on Kaldellis’s translation of that figure.

[images] (1) Gender role reversal in responsibility for violence. From chapbook, dated c. 1750, The World turn’d upside down, or, the folly of man; exemplefied in twelve comical relations upon uncommon subjects. Illustrated with twelve curious cuts, etc. Via Public Domain Review. (2) Man rejects role of soldier. The caption below the image: “La donna armata a piastre, e armata spada / fa il marito filar in su la strada. {The lady is armed with plate armour and sword / and the husband spins in the street.}” Detail from late 16th-century woodcut Il Mondo Alla Riversa {The World Upside Down}. Created in the style of Giambattista de Cavalieri, Italian, about 1525–1601. Held at the Museum of Fine Arts (Boston). The British Museum (London) and the Metropolitan Museum of Art (New York) also hold copies. Other similar woodcut images: World Turned Upside Down, or the Folly of Man (example 1, example 2); and Die Verkehrte Welt (example).