Hercules was sold as a slave to the Lydian queen Omphale. Their relationship became like that of a wife and husband. About 1850 years ago, Lucian explained:

No doubt you have seen some picture of him: he is Omphale’s slave, dressed up in an absurd costume, his lion-skin and club transferred to her, as though she were the true Heracles, while he, in saffron robe and purple jacket, is combing wool and wincing under Omphale’s slipper. [1] 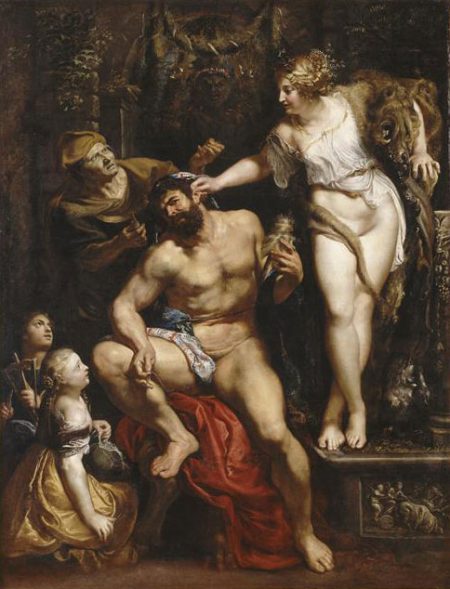 If you boast that you don’t in any way obey your wife’s orders, you are talking nonsense, for you are not made of tree or stone, as the saying is. You suffer what most or all of us suffer: you are ruled by a woman. But if you say, “She doesn’t smack me with her slipper, nor do I have an unchaste wife whom I must put up with and shut my eyes,” then I say your servitude is milder than that of others. You have sold yourself to a chaste and not very severe mistress. [2]

“Davus, very soon — I’m absolutely serious — I intend to put my agonies behind me.” Chaerestratus says this, chewing his bleeding fingernail. “Why should I embarrass my sober relations with my scandalous behaviour? Why should I wreck my inheritance at that filthy threshold by getting a bad reputation, drunkenly singing with my torch gone out in front of Chrysis’ dripping door?”

“Well done, lad. Be wise, slaughter a lamb for the gods who drive evil away.”

“You’re messing about! You’ll get a beating from her red slipper, lad, to stop you struggling and gnawing at her tight nets. Now you are fierce and violent, but if she called you, right away you’d say, ‘Whatever shall I do, then? Not go, even now, when she invites me and positively begs me?’ No, if you have got away whole and in one piece, don’t go even now.” [3]

Despite Chrysis beating him, Chaerestratus struggled to refuse her summons. To reduce domestic violence, men must learn to stand up to women psychologically, to set boundaries, and to have enough self-respect and self-confidence to leave a woman and not come back.

As the example of Hercules shows, any man, no matter how strong, can be a victim of domestic violence against men. Men are reluctant to defend themselves physically against women. Moreover, using objects and attacking an intimate partner when he is physically vulnerable, even the smallest, weakest woman can do a man serious harm. That obvious reality is denied to shame and blame men victims:

On a man who used to be hit by his wife

Given that you claim descent from the line of Barbatus in order that ferocious Varitinna may be related to you, why are your temples beaten by a lady’s slipper, and why has your little goatee fallen out, plucked by her demeaning hand? Stop at once pretending that you have heroic ancestors and that the strength of a fierce line courses in your limbs. She is rather the descendant of the Salautensian line, who has the courage to lay low her husband with her heel. [4]

This epigram, probably from early sixth-century Vandal north Africa, despicably illustrates victim blaming and shaming. A descendant of a proud line of warriors may experience domestic violence. That is a painful reality. Ridiculing the suffering of such men is truly shameful.

[1] Lucian, Quomodo Historia Conscribenda Sit (The Way to Write History) 10, from Greek trans. H.W. and F.G. Fowler (1905). Heracles is an ancient Greek hero who in Roman myth was known as Hercules. Omphale lived in Lydia (in present-day Turkey). Hercules served at least a year as a slave to Omphale. At some point they had a son. The name of their son is variously recorded as Lamos, Agelaus, and Tyrsenus.

In Lucian, Dialogi Deorum (Dialogues of the Gods) 15 (13), Asclepius declares to Hercules, “I was never a slave like you, never combed wool in Lydia, masquerading in a purple shawl and being slippered by an Omphale.” Trans. id. Ancient Greek includes a specific term for whacking with a slipper: βλαυτοω.

Latin literature refers to Omphale beating Hercules with her slipper and to domestic violence against men more generally. In Terence, Eunuchus ll. 1078 (Act 5, Scene 7), Gnatho expresses in an aside his wish that Thais would beat her lover Thraso (“I only wish I may see your head stroked down with a slipper”). Trans. Henry Thomas Riley (1874). In Ovid, Heroides 9.73-4, Deianira writes to Hercules, “You are said … to have been afraid at the threats of your mistress.” Trans. James M. Hunter (2013). In Turpilius, fragment 147, a man refers to a woman beating his head with a sandal.

Hercules endured the wrestling match
with Libyan Antaeus,
checking the trickery
of the bogus fall
by stopping him from falling.
But Hercules, the mighty son of Jove,
the one who so disentangled
the knotted entanglements of their wrestling,
was conquered and bound
when he fell for the embraces
of Iole.