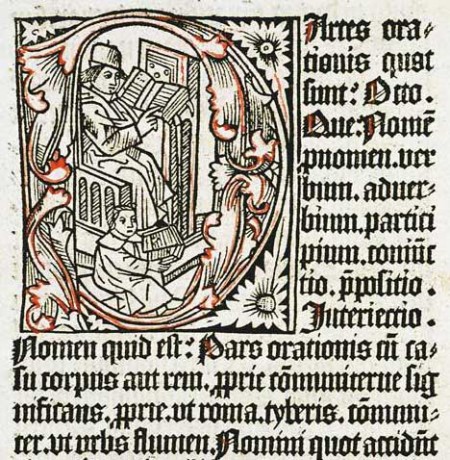 Matheolus wished he had looked at Medusa rather than married Petra. A well-educated cleric in thirteenth-century France, Matheolus was learned in grammar and logic. Matheolus learned too late that his wife Petra was a superior subject. Even the great scholar Aristotle was subjected to a woman. Turning from laughter to tears, from joy to grief, Matheolus applied his learning to lamenting philosophy’s failure and the book of his life, now gray and sad.[1]

In his book, Matheolus described women’s power to teach. He headed the relevant section, “How a woman leads her husband to the goal of solecism {Quod mulier ducit virum suum ad metam solecismi}.”[2] Medieval clerics studied exhaustively how to use Latin words correctly. Intentional solecism was a higher literary art in which women led. Citing the leading scholastic learning in medieval Europe, Matheolus declared:

What good is Perihermeneias, the Elenchi, or Prior Analytics
against her? What good is Posterior Analytics or
all of logic and everything in the school curriculum?
If one were to confess the truth, woman made both serve her.
She led Aristotle, the master of the five goals,
to solecism, with reins and halter.

Matheolus here refers to the figure of Alexander the Great’s mistress riding Aristotle like a mare. A man’s behavior is always predicated on women modifying it.

Matheolus vehemently protested husbands’ subjection to their unschooled wives. As Aristotle proved, the root of subjection is men’s physical desire for women. The beautiful maiden named Nature in Alain de Lille’s About the Complaint of Nature {De planctu naturae} described desire uniting opposites and up-ending normal order.[4] That’s what happened when Aristotle accepted a bridle in his mouth and lowered himself to his hands and knees to have a woman ride him like a mare. Matheolus protested:

It’s a shameful riding figure called solecistic;
It’s misuse of language, that clearly shows this displacement of tongue.
It’s incongruous, improper to be so ridden
Order is disorder, our signifying
offends in many ways. The art of grammar
is made dazed, the art of logic is embarrassed,
hence also Nature is astonished and in revulsion refuses to speak.

Nature in De planctu naturae did speak. She observed:

Does not Desire, performing many miracles, to use antiphrasis,
change the shapes of all mankind?
…
Here reasonable procedure is to be without reason, moderation
means lack of moderation, trustworthiness is not to be trustworthy.
Desire offers what is sweet but adds what is bitter.
It injects poison and brings what is noble to an evil end.
It attracts by seducing, mocks with smiles, stings as it
applies its salve, infects as it shows affection, hates as it loves.

This great confusion is enough to baffle even the great scholar Aristotle:

He knew the power of Nature and Reason.
But why is Nature’s own minister of Reasoning
not being helped, is astonished, such a great master?
What we say logically with our words
concludes like it did for this great scholar?
It’s embarrassing. What will philosophy say
when its great scholar is deceived by amphiboly?

Husbands of ordinary learning are even less discerning. Wives can make husbands deny what their own eyes saw, disbelieve that they can distinguish between a man and an ass in bed, and affirm that anti-men gender bigotry advances gender equality.

Marriage is no longer a figure of the world overthrown, like Alexander the Great’s mistress riding Aristotle. Alain de Lille’s concern for the grammar of sex figured more than a person of one sex conjoined with a person of the same sex.[8] The conjunction of woman and man can also have more than a literal meaning. Using the clerical language Latin in thirteenth-century Europe, Matheolus counseled men not to marry:

Don’t take one woman, but, reader, have a hundred!
Women have bound thousands of persons together in chains.
If a man has a thousand women, none has him. He is his own man.

For fear of violating the new grammar of sex, readers must read Matheolus literally. Now no one knows anything more than being his own person. The marital debt is no longer being paid. Marriage is bankrupt. If Abelard had listened to Heloise, he would have remained the man he was. And the world would have remained as it always was.

Men and women must find a new grammar of sex. Then they can form a new verbal bond of incarnation in which every rule is struck senseless.[10]

[1] On Matheolus wishing he had looked at Medusa before marrying Petra, Lamentations of Little, Little Matheus {Lamentationes Matheoluli} l. 111-2:

Why didn’t I meet Medusa herself,
and allow myself to benefit from being turned into stone?

Matheolus (Matheus of Boulogne) was well-educated and well-connected in clerical circles. He studied law and logic for six years in Orléans. He studied under Jacques de Boulogne, who became Bishop of Thérouenne, and Nicaise, who became Canon of Fauquembergue. Matheolus spent many years living in Paris, practiced canon law as a cleric, and attended the Council of Lyon in 1274. Van Hamel (1892) pp. cx-cxii (pdf pages 578-80).

I turn from laughter to tears, from joy to mourning

May your title not be written with red dye, nor your paper treated with oil of cedar.

That quotes Ovid, Tristia 1.1.7. It indicates a book that doesn’t have colorful, luxurious materiality.

[3] Lamentationes Matheoluli l. 459-64. The cited works are works of Aristotle newly recovered in western Europe via the Islamic world. The five goals seem to be five categories of sophisms set out in Aristotle’s Elenchi I.3.

He {Aristotle} was full of great love; he always upheld the truth, for which we should praise him highly. And if he let himself be ridden like a horse, it was for joy and for pleasure. Love led him to do this by his great gentleness; so he ought not to be blamed. He clearly showed that we ought to love women, without slander or ill speaking, for they are not guilty at all for this

l. 885-95, from French trans. Burke (2013) p. 82. Le Fèvre’s figure of love lacks imagination. It’s just men as cats for women. Men loving women should not require them to be made like animals in subordination to women and silent about women’s faults.

If you are seeking more
witnesses, witness what’s given in Ovid’s text:
“the hands of women are fitted for any crime.”
What they dared to do, I did not dare to write.
Therefore, to summarize, there is much more that women have done!

In this verbal bond
every rule is struck senseless.

Ziolkowski, Jan M. 1985. Alan of Lille’s grammar of sex: the meaning of grammar to a twelfth-century intellectual. Cambridge, Mass: Medieval Academy of America.