In classical literature, both Greek and Latin, women favored male asses for their large masculine member. By the Middle Ages, the status of physical masculinity had degenerated. The medieval Latin tale Asinarius figures a woman as preferring the masculine physicality of a man over that of an ass.[1] A leading medieval work of men’s sexed protest, Lamentations of Matheolus, depicts the depreciation of physical masculinity even more starkly. Masculinity was so devalued that Matheolus believed that he couldn’t confidently distinguish between a female ass and a man.

Matheolus was in bed with his wife when her male lover crept under their covers. Matheolus felt that man in their bed in the dark of night and thought he was a thief. He told his wife to hold that thief. Then he jumped out of bed and ran to get a dagger. His wife quickly switched her lover with a female ass. When Matheolus returned, he killed the body she was holding. Then in the light he saw that he had martyred his good ass Burnelle. His wife insisted that his sense of touch was mistaken and that there was never a man under their covers. In response to his wife’s declaration, Matheolus accepted and believed that he couldn’t feel the difference between a female ass and a man.[2] He had internalized the obliteration of masculinity.

Another medieval story affirms Matheolus’s difficulty in sensing the difference between an ass and a man. A merchant had to take many business trips in the traditional, burdensome gender role of men. His wife entertained a lover while her husband the merchant was away on his business. A neighbor informed him of his wife’s affair. The husband then pretended to go on a business trip. He set watch to catch his wife’s lover. Seeing her lover in front of their house, the husband approached unrecognized and claimed that she sent him to hide her lover in a chest in the house. The husband had the lover get into the chest and locked him in. Then he went to his wife’s family and declared her betrayal. He explained:

in order that you shall not say that I blame your daughter without cause, you shall both see and touch the scoundrel who has done us this dishonor, and I beg that he may be killed before he can get away. [3]

The reference to “both see and touch” connects this story to Matheolus’s account. 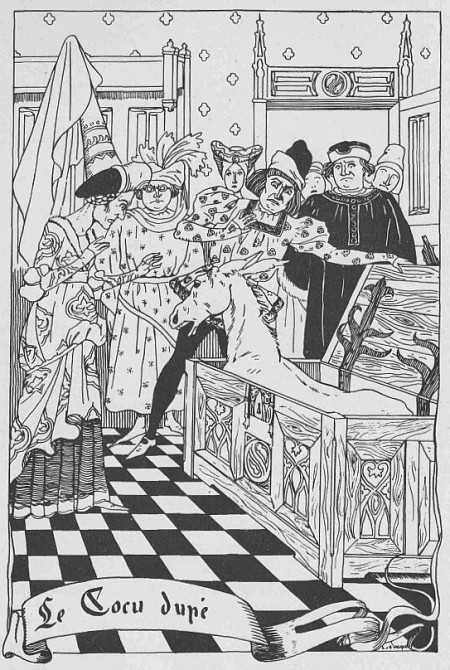 Seeing and touching don’t matter when persons can’t distinguish between an ass and a man. While the husband was informing his wife’s family of her betrayal, the wife unlocked the chest, released her lover, and replaced him with an ass. The husband brought a crowd armed with swords and hammers back to his house. He publicly accused his wife of adultery. He proposed to kill her lover and send his wife back to her family.[4] His wife denied the charge of adultery. The husband then opened the chest. Everyone saw an ass. Everyone turned on the husband for lying about his wife. If the husband hadn’t fled, his wife’s brothers would have killed him.

With mediation from town officials and strict promises from the husband, his wife’s family relented from killing him. The husband and wife were re-united:

ever after that he was all kindness and consideration, and never did a man conduct himself better to his wife than he did all his life; and thus they passed their days together.

That’s a significantly different ending from “they lived happily ever after.” Not recognizing and appreciating men’s physical masculinity eliminates happiness.

Cf. Van Hamel (1892) pp. 30-1 (nearly the same). The context in Matheolus is five ways in which women confound men: tongue, sight, touch, falsehood, and false belief. Sight, which immediately precedes the above story about touch, involves men not being able to believe what they see (the story of Guy, his wife, and her lover Simon). The name Egistho refers to Aegisthus, who committed adultery with Clytemnestra.

The fabliau De la dame qui fist entendant son mari qu’il sonjoit (from the first half of the thirteenth century) is similar to the story from Matheolus. But in the fabliau, the husband recognizes the difference between a she-ass and a man and doesn’t kill the ass. He does, however, dream of having intercourse with the she-ass. De la dame qui fist entendant son mari qu’il sonjoit is a variant (I, manuscript B) of the fabliau Les Tresces (The Tresses). The Old French texts of both that fabliau and the main variant (II) are available as #69 in Nouveau recueil complet des fabliaux 6, Nooman (1991) pp. 209-58. An English translation of variant II is available in DuVal & Eichmann (1982) pp. 63-76. Cutting off a woman’s hair in the context of adultery and a substitute woman occurs in both Les Tresces and Decameron VII.8.

The protagonist in Nigel of Canterbury’s Speculum stultorum (Mirror of Fools) is an ass named Brunellus. Speculum stultorum, written in the late twelfth century, was a highly popular work. Klein, Rubel & Schmitt (2014), p. 77, notes that Burnelle may be a metathesis of Brunellus.

Apparently alluding to Brunellus in the Speculum stultorum, Chaucer referred to “Daun Burnel the Asse” in The Nun’s Priest’s Tale (VII.3312–19). Burnel could also connect to the name of the ass in the Latin Lamentations of Matheolus or in Le Fèvre’s French translation. Chaucer’s version suggests that the name of the ass may itself have become a foolish game. 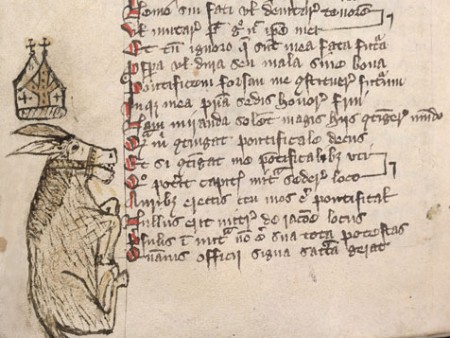 [3] Les Cent nouvelles nouvelles, story 61, from French trans. Douglas (1899). The underlying French for “you shall both see and touch the scoundrel who has done us this dishonor” is je vous monstreray à l’oeil et au doy le ribauld qui ce deshonneur nous a fait. CNN-1876 pp. 275-6. Recent English translations obscure the reference to seeing (to the eye / à l’oeil ) and touching (by the finger / au doy). For example, “I will show you the debauched fellow who is dishonoring us.” Diner (1990) p. 232. Rather than relying merely on individual deception, cuckoldry is now institutionalized in official procedures for establishing paternity.

Antoine de la Sale was probably the author of Les Cent nouvelles nouvelles. It is thought to have been first published as a printed book about 1460. It was subsequently republished many times. The subsequent quote is also from the English translation of Douglas (1899).