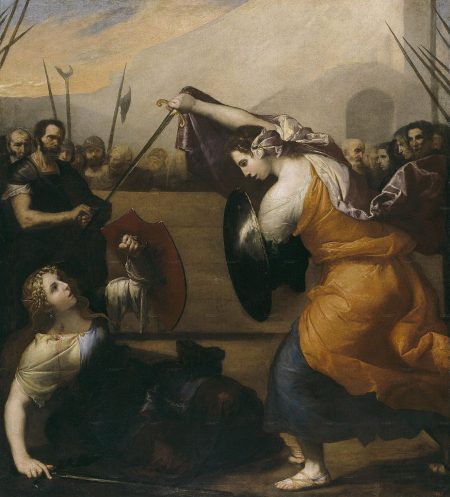 Around the world in 2010, about fifteen times more men than women were prisoners. That’s a much greater gender imbalance than among tech-industry CEO’s, political leaders, tenured professors, and other categories of elite persons. Part of the explanation for the lack of gender parity in prisoners is that women’s criminal acts tend to be less salient than men’s. When women induce men to commit criminal acts, criminal justice typically recognizes only men’s culpability. The great medieval historian Galbert of Bruges, in contrast, forthrightly recognized that Dedda suborned the murder of her husband Boldran in eleventh-century Flanders.

Dedda sought to have her husband murdered because she wanted to marry Erembald. Dedda’s husband Boldran was castellan of Bruges. Erembald was a vassal and knight under Boldran. Galbert recounted:

Erembald had often debauched himself in adultery with the wife of his lord the castellan. And that adulteress, so they say, had promised her adulterer the viscountship {her husband’s title} if her husband were, by chance, to die soon. For this reason the adulterer was always plotting the death of his lord.

In describing Erembald as debauching Boldran’s wife, Galbert echoed the long, oppressive history of contempt for men’s sexuality. Erembald no more debauched Boldran’s wife than she debauched him. An Old French account of the murder described Dedda as “an evil and dishonest ribald … who encouraged him in this lechery.”[2] Not surprisingly, Dedda consented enthusiastically to having sex with Erembald and sought to marry him.

With keen social insight, Galbert sarcastically muted Dedda’s criminal culpability. He described her criminal act of suborning murder through an abstract hypothetical: “if her husband were, by chance, to die soon.” Erembald knew what Dedda was actually saying. Readers similarly should recognize the actual significance of her words. Typical gynocentric behavior of providing excuses for women exacerbates gender inequality among prisoners. Justice demands fair recognition of culpability: Dedda suborned the murder of her husband Boldran.

The murder of Boldran highlights additional patterns of gender oppression. According to Galbert:

The men of Flanders were ordered to go on a certain expedition, and they traveled by horses and ships all the way to the place of danger where the land was being invaded in order to defend the fatherland. Night came while the ships were gliding along the River Scheldt, and the castellan Boldran and his knight Erembald, in whom he trusted more than anyone else, and many others, dressed in full mail coats and prepared for battle, dropped anchor in the middle of the river in order to wait for daylight. … When the silence of the night had come, while the castellan was standing urinating at the edge of the ship, Erembald ran up from behind and cast down his lord, flung far from the ship, into the depths of the watery torrent. This was done while the others were sleeping, and no one other than the adulterer knew what had become of the castellan, who had been drowned without children.

Societies throughout history have used men as instruments for fighting enemies. Galbert ironically described the men “ordered” to engage in violent action as defending the “fatherland.” The “fatherland” is a gendered term used to obscure reality. Gynocentric society orders men to fight and die to protect women. They live in what is more appropriately called the motherland.[3]

Galbert apparently was sensitive to the disposable status of men. Boldran committed his life and considerable expense (a full mail coat) to defending the motherland. Yet Boldran and the men with him didn’t even have the benefit of chamber pots for conveniently urinating. As Boldran urinating sent his watery torrent into the watery torrent of the river, the man’s personal, human being is reduced to the anonymous, inhuman natural world. Another account of murdering Boldran describes Erembald stabbing Baldran with a sword and throwing him off a bridge into a river.[4] Galbert may have invented the detail of Boldran being pushed off the ship from behind while urinating into the river. Galbert’s version makes more shameful Erembald’s killing of Boldran at the behest of Dedda. It also more subtly underscores the disposability of men.[5]

When Erembald returned {after killing Boldran}, therefore, he married his adulteress and bought the viscountship with the means provided by his lord’s {Boldran’s} labors.

the wife of this Holdran {Boldran} married her adulterous lover, the betrayer of her husband, from which fact it became obvious that Erembald committed such a great sin on the unfaithful wife’s advice.

Erembald, who had been Boldran’s vassal, married Boldran’s wife Dedda after Boldran died. That would have been publicly known and documented. As Boldran’s former vassal, Erembald would have been socially subordinate to Dedda. He almost surely would not have killed her husband without her advice and encouragement. To impress her lady friends with her rule over her new husband, Dedda may well have told them that she suborned her former husband’s murder. She plausibly also told them how Erembald carried out that murder, as she heard from him. The lesson of this sensational story would have resonated with men’s life experiences: do whatever women desire, no matter how despicable, and you will advance in the gynocentric world.

The vastly disproportionate imprisonment of men shows the reality of gender power and the fundamental injustice of gynocentrism. Women’s criminal behavior is commonly overlooked or excused, while men as a gender are criminalized. In his account of the murder of Boldran in eleventh-century Flanders, Galbert of Bruges courageously identified Boldran’s wife Dedda as having suborned her husband’s murder. Women commonly and highly effectively incite men to violence. Recognizing women’s culpability, as Galbert did, would be an important step toward less gender disparity in criminal punishment. Criminal justice should serve justice, not gynocentric interests.

Earlier editions of the Latin text of De multro are freely available online. See Pirenne (1891) and Köpke (1856a).

De multro 71 gives the name of Boldran’s wife as “Dedda or Duva.” Demyttenaere referred to Dedda as Dove:

Was it not natural for a Christian writer to interpret the machinations of Dove, whose name, moreover, was homophonous with Eve’s (Duva, Eva), within the context of original sin and the fall of mankind, and to see in Dove a new Eve?

[3] In the spirit of her praise of the action of Walter of Vladslo’s wife in cuckolding him, Partner observed of the “countess of Holland, a major player in the high-stakes game of replacing the dead count of Flanders”:

We should note that the countess’s aggressive maneuvering for power, using males as placeholders and pawns, deploying the seduction of promises, favors, gifts, is quite similar to Dedda’s strategy.

Partner (2009) pp. 124, 125. Animalizing men as “males” and using men as placeholders and pawns is prevalent in gynocentric society.

[5] Rider didn’t recognize Galbert’s literary seriousness in his representation of this incident. Rider instead offered a trivializing conjecture:

this part of the story, at least, was made up and seems to have been shaped at the rumor mill to titillate a popular palate.

Murray argued that Galbert’s account of the murder of Boldran “has all the hallmarks of a calumny repeated to discredit the descendants of Erembald after their treachery toward Charles.” It’s part of Galbert’s depiction of Bertulf’s kin “as agents of the Devil: deceivers, betrayers, and destroyers of God’s creation.”  Murray (2009) pp. 194, 199. Galbert’s account of Boldran’s murder, however, is more complex than that. Why did Galbert even bring Dedda into the story of Boldran’s murder? Why not claim that Erembald threatened and forced Dedda into marrying him in accordance with the typical pattern of blaming women’s bad acts on men? Galbert apparently wanted to document Dedda’s culpability in the murder of Boldran.