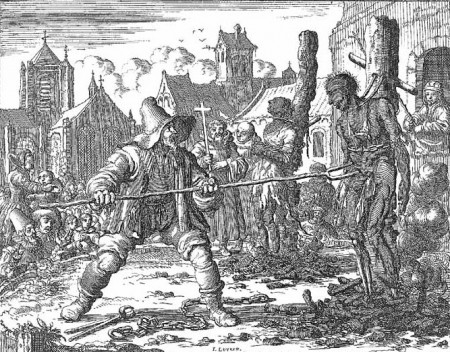 In academic literature and popular culture, prosecuting witches is commonly associated with persecuting women. However, in early modern Europe, about twenty-five percent of persons formally charged with witchcraft were men.[1] Throughout history, persons executed for any reason have been vastly disproportionately men. Malleus Maleficarum, a leading medieval Latin work on witches, provides key insights into gender, witches, and punishment. Malleus Maleficarum and its modern reception illustrates gender bias toward constructing men as demons, blaming men for corrupting women, and fabricating hateful claims about men’s privilege.

Witches {malefici: masculine plural} clearly derived their origin from a baneful mutual alliance … no one can deny that they derived their increase in number from these filthy acts, since demons {demones: masculine plural} engage in these acts not for the sake of pleasure but for the sake of corrupting. The arrangement will, therefore, be the following. The succubus demon releases a seed from a criminal man. If the demon is assigned personally to this man and does not wish to make himself the incubus for the female witch, he will hand the seed over to the demon assigned to the woman or female witch. Then the second one will make himself an incubus for the female witch under a certain configuration of stars that serves his purpose, so that the man or woman begotten will remain mighty in physical strength for the purpose of performing acts of witchcraft. [4]

Just as in nineteenth-century social-scientific study of prostitution and current claims about rape, the underlying narrative blames males:

Final conclusion. It can be said that the incubus demons are not merely aggressive towards women begotten from their filthy acts or towards those offered to them by midwives, but with their whole effort they hanker after all the holiest virgins of a given land or town. They have the female witches lead virgins astray or couple virgins and male demons. This is what experience, which is the instructor of facts, has taught. For example, certain women who were burned up in the town of Ravensburg asserted before final sentence something like this. The said that their masters enjoined them to strive with their entire effort to overthrow the holy virgins and widows.

Malleus Maleficarum has been socially construed as an exemplar of misogyny. Its misandry has scarcely been recognized even in the context of U.S. mass incarceration of men. Demonizing men generates relatively little deliberative concern.

As for the first question, namely why a larger number of female witches is found among the delicate female sex than among men, it would certainly not be helpful to cite arguments to the contrary, since experience itself makes such things believable more than do the testimony of words and of trustworthy witnesses. Without looking down upon the sex in which God has always performed brave deeds in order to confound, let us say that while different reasons are given by different people for these facts, these reasons always agree in principle. Hence, this topic is quite worthy of being preached for the admonition of women. As experience has often shown, women are eager to listen, so long as it is propounded with circumspection. [5]

The male authors inject the claim of not looking down upon women. They implicitly acknowledge that women might be unwilling to listen to preaching. They advise circumspection so as not to offend women. They subsequently emphasize that advice:

Preachers should propound and mention these reasons for the preponderance of women among witches cautiously. In Scripture, they say bad things about women for the most part in the Old Testament — because of the first sinner Eve and her imitators. But later in the New Testament, because the name changed {Eve became Ave, Mary the mother Jesus} and because, as Jerome says, “All the evil that the curse {maledicto} of Eve brought in was removed by the blessing {benedicto} of Mary,” there are very many statements about women that should always be praised and preached. In modern times, however, this kind of Breach of the Faith {perfidia} is found more often in women than in men, as experience itself indicates

Authors cannot merely describe reality as persons perceive it. Prudent authors must be careful not to offend women in gynocentric culture.

Malleus Maleficarum rhetorically softens its explanation for the predominance of female witches. It adds two irrelevant assertions and a claim about variance rather than mean. Moreover, its explanation is distanced as not that of the authors, but of “some Doctors”:

Some Doctors give the following explanation. They say that there are three elements in the world that do not know how to maintain a middle course in terms of goodness or evil, and instead attain a certain pinnacle in goodness or evil when they pass over the boundaries of their condition, these three things being a tongue, a churchman and a woman. They do this in goodness when they are ruled by a good spirit, and as a result of this they become excellent. They also do this in evil when they are ruled by an evil spirit, and as a result of this they are rendered very bad.

Malleus Maleficarum elaborates at length on the extremes of good and evil for a tongue and a churchman. It does the same for a woman.

In one chapter, Malleus Maleficarum draws upon literature associated with men’s sexed protest. That chapter incorporates biblical wisdom, criticism of Helen of Troy, biographical stories of Xanthippe and Socrates, Jerome’s Theophrastus, the love letter of Valerius to Rufinus, Bernard of Cluny’s learned Latin play, and hagiography of Saint Pelagia. The chapter emphasizes women’s strong, independent sexuality. Yet the chapter also suggests that references to woman be read as non-gendered references to lusting of the flesh:

The predominance of women among witches wasn’t sufficient to overcome the overall societal bias toward executing men. In New England from 1620 to 1725, 103 persons were formally charged as witches. About six women were charged for every man charged. About a third of those charged were found guilty and hung.[7] Throughout all the antecedent U.S. colonies across those years, 317 persons were executed for any charge. Five men were executed for every woman executed. In the antecedent U.S. colonies and the U.S. since 1608, about 15,400 persons have been executed. Forty-two men have been executed for each woman executed.[8]

In England and Wales, persons executed have also historically been overwhelming men. About 1,500 witches were executed in England and Wales from 1450 to 1750. Probably about nine women were executed as witches for every man executed as a witch.[9] In late seventeenth and early eighteenth century England (the earliest period for which good data are available), about five men were executed per woman executed among executions for any charge. Since 1715, about 12,500 persons have been executed for any charge. Within that total, nineteen times more men than women were executed.[10] The sensational story of executing female witches has attracted far more attention than the long and continuing story of executing a far larger number of men.[11]

Malleus Maleficarum includes wicked humor. One of its bizarre stories about castration ends with a female witch allowing a man to recover a penis from a disembodied collection of penises. The witch, however, forbids the man from taking a big penis “because it belonged to a parish priest.” Malleus Maleficarum concludes with an ironic claim about men’s privilege:

Conclusion. Everything is governed by carnal lusting, which is insatiable in women … for intelligent men it appears to be reasonably unsurprising that more women than men are found to be tainted with the Heresy of female witches. Hence, and consequently, it should be called the Heresy not of male witches, but of female witches, to name it after the predominant element. Blessed by the Highest One, Who has, down to the present day, preserved the male kind from such disgraceful behavior, and clearly made man privileged since He wished to be born and suffer on our behalf in the guise of a man. [12]

This thanks to God for preserving men from disgraceful behavior relies on abhorrence of homosexuality. Malleus Maleficarum took that thanks from a writer who argued:

Since demons abhor homosexuality, they restrict their sexual attentions to human females, and for this the writer is duly grateful to God. [13]

According to the prevailing demonology, demonic male heterosexuality corrupts women into witches. Men enjoy believing that their duty is to suffer and save the world. Humorless fantasy of men’s privilege now dominates public discourse far beyond beliefs about witches ever did.

[3] In Malleus Maleficarum, 30% of the references to witch or witches (197 out of  650) use masculine forms. Johannes Nider’s Formicarius (written 1435-37) in its book on witches (book 5) used 47 masculine references to witches compared to 13 feminine references. For reference counts for these and other early demonological texts, Apps & Gower (2003) p. 104, Table 2. Schulte (2009b), Ch. 5, also reviews references in early demonological texts and finds considerable attention to male witches. Schulte exaggerates, in my view, the extent to which Malleus Maleficarum concerns female witches and condemns all women as potential witches. Malleus Maleficarum incorporates categorical criticism of women from literature of men’s sexed protest. Such criticism was not meant to be taken literally categorically.

Malleus Maleficarum is attributed to Heinrich Kramer (Heinrich Institoris) and Jacob Sprenger. Some scholars believe that Sprenger was only a nominal co-author. Kramer served as inquisitor, but other authorities challenged his views. The elaborate endorsements prefaced to Malleus Maleficarum indicate its struggle to assert authority. Other inquisitors reportedly denounced Heinrich Kramer’s views in 1490. In 1505, the Franciscan Samuel de Cassini strongly criticized the claims in Malleus Maleficarum. The book had little influence in Spain and the Netherlands.

It may seem odd in light of its modern notoriety to say that from its inception the Malleus was a work which exerted a limited practical influence, but the fact is, its numerous early editions do not seem to have stimulated any witch-persecutions in areas where none had been brought earlier

More more widely cited is the etymology of woman (femina) that Malleus Maleficarum took from Antoninus of Florence’s Summa:

the word “femina” is spoken as “fe” and “minus,” because she has and keeps less faith.

Hayton, Darin. 2011. “How Many Witches Were Executed?!?” Consortium for History of Science, Technology and Medicine blog (pachs.net), Oct. 27 (data appendix).