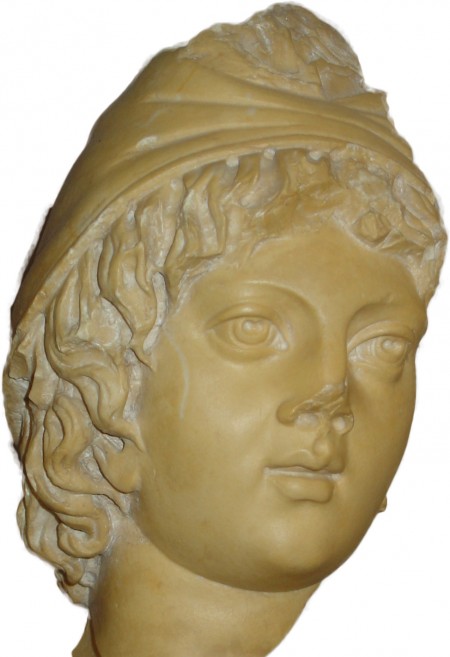 To make male animals more docile and subservient, their owners commonly castrate them. Reasons for castrating men have been more complex. In the ancient world, men were castrated to serve chastely the great goddess Cybele, to be servants who wouldn’t cuckold the master’s wife, or to be high-voiced, non-threatening singers in courts. Men were also castrated for socially constructed crimes against women. The subordination of men within gynocentric society is the primary and continuing reason for men’s castration. Gynocentrism, however, becomes merely a term of facile intellectual posing, like patriarchy, if deployed as a totalizing master narrative. In reality, men are active agents partly responsible for their own castration. The medieval poem about Sincopus, written in Latin about the year 1100, documents that men’s greed has contributed to castration culture.

The poem about Sincopus directly addresses castration. Sincopus, a castrated man, guarded and served the beautiful woman Flora. Although Flora’s husband hired Sincopus, he didn’t order Sincopus to be castrated. The poem’s narrator asked Sincopus why he was castrated:

For what reason do you lack your member and two testicles?
Perhaps Perifras cut them off with sharp metal
And now they are withered with dull sores,
Or perhaps a rupture with its burden grieved you immensely,
Or the decency of a common virgin was ravished,
Or the girl of a scarcely known family was prostituted,
Or the wife of a poor man was deluded by your gift;
Alas, speak! Tell me which of them you will admit is the truth [1]

The possibilities put forward in this question probably were relatively common reasons for castrating men.

Criminalizing men in relation to women contributes to castrating men. The poem about Sincopus describes as a reason for castration that “the decency of a common virgin was ravished.” The decency of a common virgin in public understanding almost surely meant the status of any unmarried woman without a notorious reputation for sexual activity. The charge against a man wouldn’t necessarily be rape. While ravish could mean rape, it could also mean having consensual sex, with penal responsibility for that sex effectively attributed to the man. Regulation of men’s sexuality at U.S. universities is moving back toward such a regime, but without the distinction for sexual reputation.[2]

Other reasons for castrating men underscore criminalizing men in relation to women. Men were castrated for having sex with other men’s wives. Those wives are figured as deluded women merely seeking gifts for sex to help support their impoverished families. Men were also castrated for prostituting a girl. U.S. legislation, building upon the history of the Mann Act, defines any person under age 18 having “any sex act on account of which anything of value is given to or received” as a victim of “sex trafficking.”[3] In conjunction with that broad definition of prostitution and its victims, the text of the legislation leaves no doubt that the victim-prostitutes of concern are female and the prostitution perpetrators, male.

The poem about Sincopus also indicates that men were castrated as medical treatment. The phrase “a rupture with its burden grieved you immensely” probably refers to a hernia in which a section of the intestine enters the scrotum. That’s a common form of hernia among men.[4] It can cause inflammation of the scrotum and sepsis. Castration is plausible medieval treatment for such a hernia.

The narrator’s reference to Periphras cutting off Sincopus’s genitals is obscure. The German verb fräsen means “to mill.” The Swedish word fräs indicates a milling machine or cutter. Peri is a Greek prefix meaning “around” or “in excess.” Periphras could be a descriptive name for a surgeon who castrated boys at the behest of parents or lords.[5]

“Nothing I’ve undergone,” says Sincopus, “has been unworthy of me,
I do not want you to think I am such a base man;
My soul was not remiss as you believe,
Entangling itself in such foul faults.
But since you ask me why I cut off my genitals,
Lest you hope for more, I shall tell you the story briefly.” [6]

In brief, Sincopus cut off his own genitals. The story Sincopus tells begins with a pompous, periphrastic oration:

Swollen with knowledge of the grammatical art,
Overflowing with brains but not wealthy in substance,
I was vexed, irritated with perpetual burning of the breast:
“What are you doing? Look! You have no riches
Or means whence to make a small gain grow;
If you have money you will always be honored;
There is no honor for you destitute, no friends for the needy;
If gold is lacking, no letters are pleasing! [7]

Sincopus felt that his learning made him deserving of wealth. He castrated himself so that he could join the fat Galli serving in luxury the goddess Cybele.

Sincopus’s greedy, self-interested service of the goddess ended badly. So as to ensure and legitimate favorable omens, Sincopus preserved  his severed genitals:

At last let me confess that my member, which I destroyed,
I turned into ash and put aside in the house,
And mixing it with ground pepper, I preserved it like gold. [8]

While performing his holy offices, Sincopus carried with him the pepper-preserved ashes of his genitals.

Having become through his castration an eminent person, Sincopus hosted numerous dinners. Sincopus’s house even hosted guests when Sincopus wasn’t home. At one such dinner, the guests wanted pepper. The servant-waiter searched about the house and couldn’t find any. He then went to seek some from the neighbors. The guests themselves then began to ransack the house for pepper. They broke open the chest in which Sincopus had stored the ashes of his genitals mixed with pepper. The guests used that mixture to season their food.[9]

After returning home two days later, Sincopus discovered the precious, preserved ashes of his genitals were gone. The servant explained that the guests had broken into the chest and used the pepper they found there to season a dinner “rich with fat fowl.” None of the servants knew what had been mixed with the pepper. Sincopus then delivered aloud a prolix lamentation. A servant muttered:

What are these words that our lord, alas! speaks?
Perhaps he pickled his genitals that he cut off;
He burned them in fire and mixed them with pepper.
I would consider myself stupid if I thought pepper thus became aged;
For seasoning his member is brought to our tables;
I dipped my meat in the meat of my lord. [10]

This sensational story rapidly spread from the servants to everyone in the city. Sincopus was disgraced. He lost his high position and was covered in a shower of spit. City leaders planned to dismember Sincopus: break his legs, cut off his hands, and tear out his tongue. Sincopus wisely fled. In a far away place, he found a job as guardian of Flora.

Sincopus ends the poem by requesting the poet not to disclose his secret to all. Castrating men is today of great public importance. After nearly a millennium, Sincopus’s secret must be further revealed. Castration culture should be a matter of careful study for all.

[1] Radulfus Tortarius, Epistle VI, l. 66-73, from Latin trans. Wolterbeek (1991) p. 181.  All subsequent quotes are from id. unless otherwise noted. I cite quotes by “Sincopus” and poem line numbers. I’ve made some minor changes to the translation for clarity and precision. Radulfus Tortarius doesn’t have a well-standardized name. His name also commonly appears as Raoul Le Tourtier and Rodulfus Tortarius. A French Benedictine monk of the Abbey of Fleury-sur-Loire, he was born in the mid-eleventh century and died after 1122.  His poetic works are preserved in only one manuscript, MS. Vat. Reg. 1357. Ogle & Schullian (1933) p. xxxii.

The name Sincopus is similar to the word syncope. The latter is a grammatical term meaning the taking away of sound from within a word. That can be understood as a grammatical metaphor for castration.

The poem about Sincopus has attracted little scholarly attention. A nineteenth-century commentator ignore its contents for being “coarse” and “of little taste.” Wolterbeek (1991) p. 88, referring to the view of Eugène Certain in an 1853 publication. Another scholar called it “strange on all sides” and suggested that it was an in-group burlesque for Radulphus Tortarius’s friends. Bar (1937) pp. 150-1, 158.

There are frequent references {in medieval and ancient literature} to the belief that the beaver was hunted for valuable medicine that could be extracted from his testicles and that, when chased, he bit off his testicles and left them to his pursuers with the hope that, satisfied with these, they would abandon the chase.

In the most common type of hernia suffered by men, some of the lower intestine enters the scrotum (which, of course, a eunuch lacks), distending it. For a joke on that swelling, see #262.

Whilst on a trip, a wag contracted the dropsy. When he got back home, his wife asked if he had brought her a present. “Nothing for you. But here’s a pillow for your thighs.”

[5] Bar (1937), p. 154, suggests that Sincopus was a patient of a surgeon named Periphras. But Sincopus says directly that he castrated himself. Id. also notes references to persons named Periphas in Virgil, Aeneid, II.476; Ovid, Metamorphoses, VII.400; and Statius, Thebaid, VII, 641, 643. Numerous persons carried the name Periphas in Greek mythology. The name Periphras is much more rare. The father of Oedipus’s second wife Euryganeia was Periphras. Robl (2003). That man was also known as Hyperphas.

[7] Sincopus l. 81-88. Cf. Juvenal, Satire 7. In medieval Byzantium, court eunuchs became powerful and fabulously wealth.  Constantine the Paphlagonian, the son of farmer in tenth-century Byzantium, was castrated for sake of advancement in Constantinople. Court opportunities for eunuchs “may have provided Byzantine families with strong economic incentive to castrate a relative.” Tougher (2008) pp. 61, 64.

The Shahnameh, an epic poem that Ferdowsi wrote in Persian about 1000, includes a story with similarities to Sincopus’s story. In the Shahnameh, King Ardeshir defeated King Ardavan and took his daughter as wife. She, after becoming pregnant, attempted to poison King Ardeshir. The King ordered his vizier to execute the woman. The vizier secretly didn’t carry out the execution and instead hid the woman in his palace. To prove his good intentions, he castrated himself, had his testicles placed in salt, and sealed them in a jeweler’s box.  He dated the box and gave it to the King to keep in his treasury. Many years later the contents of the box were revealed to the King to prove that the vizier had no sexual relations with the woman. For an English translation, see “The Reign of Ardeshir” in Davis (2007) pp. 554-60. I’m grateful to Geert Jan van Gelder for pointing out this story.

Statius, a Roman poet writing in the first century GC, wrote a poem in which Asclepius castrated the boy Earinus to “soften him up” and make him more pleasing to the Emperor. Earinus later sent a lock of his hair in a jeweled, golden box to Asclepius to honor him. Statius, Silvae 3.4.

[9] For a humorous, twelfth-century Arabic poem about out-of-control guests causing the host great hardship, see van Gelder (1995). Radulfus Tortarius’s second epistle includes the earliest known version of the Ami and Amile (Amicus and Amelius) legend. Like the Tristan and Iseult legend, the Ami and Amile legend involves a protagonist traveling with another’s wife and sleeping with a sword between him and her. That sword figure also occurs in an Arabic tale about Hatim Tai, an Arabic paragon of generosity. See note [4] and associated text in my post on friendship and the tale of Attaf.