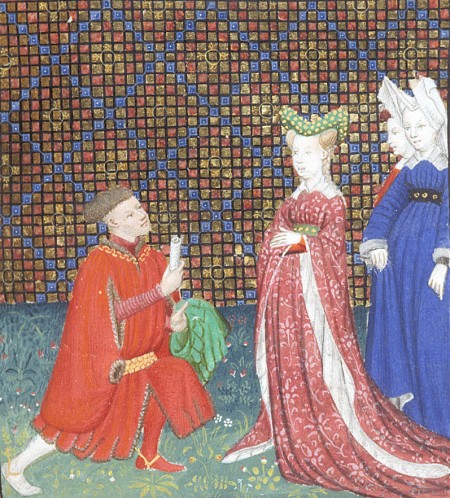 When William Caxton printed The Dictes or Sayings of the Philosophers in 1477, he used Anthony Woodville’s English translation of a French work. Woodville’s translation omitted Socratic sayings disparaging women. Caxton added those sayings to an epilogue and justified at length including them.[1] Caxton’s epilogue indicates that broad fear in discussing women constrained public discourse in fifteenth-century England.

Anthony Woodville was Lord Anthony, Earl of Rivers, Lord of Scales and of the Isle of Wright, and governor of the Lord Prince of Wales. Woodville was also the brother-in-law of King Edward IV. If Woodville was broadly fearful of including the Socratic sayings disparaging women, surely almost anyone important would likewise have been fearful.

I cannot think that so true a man and so noble a philosopher as Socrates was should write otherwise than truth. For if he had made fault in writing of women, he ought not, nor should not, be believed in his other dictes and sayings. But I perceive that my said Lord {Woodville} knows truly that such faults be not had, nor be found, in the women born and dwelling in these parts and regions of the world. Socrates was a Greek, born in a far country from here, which country is all of other conditions than this is, and men and women of other nature than they, be here in this country. For I know well, of whatsoever condition women be in Greece, the women of this country be right good, wise, pleasant, humble, discreet, sober, chaste, obedient to their husbands, true, secret, steadfast, every busy, and never idle, temperate in speaking, and virtuous in all their works — or at least should be so. For which causes so evident my said Lord, as I suppose, thought it was not of necessity to set in his book the sayings of his author Socrates touching women. But for as much as I had commandment of my said Lord to correct and amend where I should find fault, and other {fault} find I none save that he has left out these dictes and sayings of the women of Greece, therefore in accomplishing his commandment — for as much as I am not certain whether it was in my Lord’s copy or not, or else, perhaps, that the wind had blown over the leaf at the time of translation of his book — I intend to write those same sayings of the Greek Socrates, which wrote of the women of Greece and nothing of them of this kingdom, whom, I suppose, he never knew; for if he had {known the women of England}, I dare plainly say that he would have excused them specially in his said dictes. Always not presuming to put and set them in my said Lord’s book but at the end separately in the epilogue of the work, humbly requiring all them that should read this little epilogue, that if they find any fault to attribute it to Socrates, and not to me … {about a page of Socratic sayings disparaging women} So these be the dictes and sayings of the philosopher Socrates, which he wrote in his book; and certainly he wrote no worse than the above recited. And for as much as it appropriate that his dictes and saying should be had as well as others’, there I have set it in the end of this book. And also some persons, perhaps, that have read this book in French would have attributed a great fault in me that I had not done my duty in viewing and overseeing of my Lord’s book according to his desire. And some other also, perhaps, might have supposed that Socrates had written much more ill of women than here above is specified, wherefore in satisfying of all parties, and also to defend the said Socrates, I have set these said dictes and sayings apart in the end of this book, to the intent that if my said Lord or any other person, whatsoever he or she shall be that shall read or hear it, that if they be not well pleased with this, that they with a pen erase it out, or else rend the leaf out of the book.

Caxton’s Dictes or Sayings omitted other passages from the Socrates section and well as other text from Woodville’s source.[2] Caxton obscured those other omissions. Those omissions probably had little public significance. Sayings disparaging women, in contrast, almost surely were controversial. Woodville was a regular patron to Caxton. Woodville and Caxton may have conspired to attract attention by skirting controversy.[3] In any case, their actions and words indicate that both plausibly feared being associated with text disparaging women.

Because human societies, like most primate societies, are gynocentric, public discourse concerning women is particularly treacherous. Woodville and Caxton, like most men throughout history, were closely associated with women and vitally dependent on women. Woodville was a bachelor seeking a new wife. Caxton was fervently grateful to his patron Lady Margaret, Duchess of Burgandy.[4] In 1478, about a year after printing The Dictes or Sayings of the Philosophers, Caxton printed Woodville’s English translation of Christine de Pizan’s Proverbes moraulx. Like Jehan Le Fèvre writing Le livre de Leesce (The Book of Gladness), producing a version of Christine de Pizan’s Proverbes moraulx may have been a necessary, atoning act for Woodville and Caxton.[5]

[1] Caxton’s book was named in its ending text the dictes or sayengis of the philosphres. Subsequent versions were entitled The Dycts and the sayenges of the philosphers. In modern English it’s commonly known as The Dictes and Sayings of the Philosophers. I refer to it as Dictes or Sayings. Woodsville’s translation was of the French work Les Dits moraulx des philosophes. That in turn went back through a Spanish translation to Mubashshir ibn Fatik’s eleventh-century Arabic work Mukhtar al-hikam. All quotations above, unless otherwise noted, are closely modernized English from Caxton’s epilogue, available in Eliot (1910) pp. 10-13, along with other Caxton paratexts. The Dictes or Sayings epilogue is also readily available here.

Here are the dangerous Socratic sayings as printed by Caxton:

Socrates said that women be the apparels to catch men, but they take none but them that will be poor or else them that know them not. and he said that there is none so great empechement unto a man as ignorance and women. and he saw a woman that bare fire, of whom he said that the hotter bore the colder. and he saw a woman sick, of whom he said that the evil resteth and dwelleth with the evil. and he saw a woman brought to the justice, and many other women followed her weeping, of whom he said the evil be sorry and angry because the evil shall perish. and he saw a young maid that learned to write, of whom he said that men multiplied evil upon evil. and he said that the ignorance of a man is known in three things, that is to wit, when he hath no thought to use reason; when he cannot refrain his covetise; and when he is governed by the counsel of women, in that he knoweth that they know not. and he said unto his disciples: “Will ye that I enseign and teach you how ye shall now escape from all evil?” and they answered, “Yea.” and then he said to them, “For whatsoever thing that it be, keep you and be well ware that ye obey not women.” Who answered to him again, “and what sayest thou by our good mothers, and of our sisters?” He said to them, “Suffice you with that I have said to you, for all be semblable in malice.” and he said, “Whosoever will acquire and get science, let him never put him in the governance of a woman.” and he saw a woman that made her fresh and gay, to whom he said, “Thou resemblest the fire; for the more wood is laid to the fire the more will it burn, and the greater is the heat.” and on a time one asked him what him semed of women; he answered that the women resemble a tree called Edelfla, which is the fairest tree to behold and see that may be, but within it is full of venom. and they said to him and demanded wherefore he blamed so women? and that he himself had not come into this world, ne none other men also, without them. He answered, “The woman is like unto a tree named Chassoygnet, on which tree there be many things sharp and pricking, which hurt and prick them that approach unto it; and yet, nevertheless, that same tree bringeth forth good dates and sweet.” and they demanded him why he fled from the women? and he answered, “Forasmuch as I see them flee and eschew the good and commonly do evil.” and a woman said to him, “Wilt thou have any other woman than me?” and he answered to her, “Art not ashamed to offer thyself to him that demandeth nor desireth thee not?”

These sayings don’t include Socratic sayings about his wife Xanthippe.

[image] Man kneeling before women. From “The Book of the Queen,” which contains various works of Christian de Pizan. Cropped from f.48, British Library Harley 4431.