The poem works somewhat as a debate in which the dominant force is Gilote (promiscuity), who coerces and converts Johane (virginity) to her ways. … Gilote and Johane {then} proselytize sexual freedom to other women and eventually come to counsel young Wife (marriage) on the best way to take a lover and still retain her dowry from a wealthy old husband. [1]

Gilote represents not just an advocate for women’s promiscuity, but also social support for sophistic reasoning. Within gynocentric society, elites tend to relish stories of wives cuckolding husbands, accounts of women’s superior capabilities, and histories of enlightenment finally overcoming the brutal treatment women have long endured from their fathers, lovers, husbands, sons, and all other men. Men’s sexuality has long been subject to repressive laws. The social power of the sophistic Gilote supports the medieval and modern satire of family courts.

Gilote knows what she wants and acts strongly to get it. Gilote declares:

I have a lover worth prizing,
A clever and prudent and handsome young man,
And he finds me whatever I need.
…
I’m in joy and in delight,
Near my dear lover, who makes me happy,
By doing what pleases me at my will.

Gilote suggests that her lover gets her kerchiefs and gloves. Those are tokens associated with courtly love, chivalry, and women inciting men to violence against men. While Gilote treats her lover like a servant in accordance with the ideals of courtly love, she also views lovers as interchangeable objects:

When my lover behaves badly in anything,
I’ll take another without making a plea,
And I’ll keep him according to my desire.
If he doesn’t conduct himself well, he’ll soon be exchanged.

Because women have long had a natural right to custody of children born outside of marriage and men no custody rights, exchanging men outside of marriage has long been relatively simple for women. A man’s person is socially vulnerable to being reduced to his penis and his wallet. To dominate and exploit a man, a woman doesn’t have to be particularly clever or cunning.  She need only be selfish and heartless.

Gilote, a skilled sophist, convinces the virgin Johane to take a lover. Because all women sin, Gilote reasons that any woman’s sexual sin has no significance. Gilote complains that if she married, she would be burdened with “way too many children.” She explains that Johane should take a lover because God commanded humans to multiply and increase. Her mother will help her explain her sexual affair to her father. If her father nonetheless objects, Gilote counsels ignoring him and blaming him:

And if your father then reproves you
And rails at you as he desires,
That you haven’t acted prudently,
Let it go. It’s nothing but wind.
And you must say: ‘Lord, if it please you,
Many a maiden has done this.
I’m neither the last nor the first,
And why should I be left behind?
If you’d arranged for me to be married well before,
I wouldn’t now be accused of this.
Have your daughters marry early,
For no virgin can protect herself.
Thought and desire condemn them —
There’s so much joy in the craft!’

Even if a woman having extramarital sex is considered morally wrong, she will be forgiven. Gilote puts forward the example of Mary Magdalen and explains:

God loves more a sinner
Who’s converted at the very end
Than any virgin, according to Scripture.

Gilote plans to confess at the very end of her life and be absolved of all her misdeeds. She urges Johane to do likewise. Johane follows her lead and takes a lover.

For those who fail to appreciate her reasoning, the poem explicitly characterizes Gilote as a sophist. Gilote is a “very eloquent woman” who urges Johane:

After Gilote educates Johane and Johane has the adventure of a lover, they become a wandering pair of teachers:

Johane went so much about Winchester
With her companion Gilote, who was headmaster,
Telling and preaching about this adventure,
That one can scarcely find a woman
Who won’t engage in such a task;
If she should be asked by a young man,
She scarcely knows how to turn down his love.

Their teaching echoes the teaching of Ovid, the medieval master teacher of love. The school of sexually adventurous women that Gilote and Johane founded studied the text and glosses of sexual adventures and engaged in arguments. Eventually women throughout England and Ireland learned women’s love game. Only since the past decade have a significant number of men started to study pick-up techniques and game. 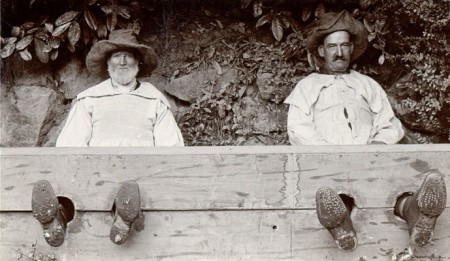 If I should happen to lie on earth with a girl,
I must bow before them and learn their law,
And suffer all their decrees!
…
If I’m written into their record,
Then am I in disrepute,
For they lay blame on many a man
For women’s woe.

Like gynocentric society in general, the courts served women’s interests:

She begins at once to shriek and scream,
And says: “By my gabbing, it shall not go so!”
And “It’s all your fault!
You must wed me and make me a wife!”
But I’d rather by law lose my life
Than bow so at their feet!
Shall I bow at the foot of my foe?
Yes, she deceives so many
That I’m threatened there with thralldom,
By those who sit dark and sweaty;
There I’m sentenced by force
Before I go home.

For having sex outside of marriage, men in medieval England were punished by being beaten while they walked around the marketplace or the church. They could also be forced to marry the woman with whom they had sex. Medieval marriage required a man to assume financial and criminal responsibility for his wife. From the Middle Ages to the present, family courts have largely been for men a satire of justice.[6]

Men’s sexuality has much less social support than women’s sexuality. That reality hasn’t been widely recognized for medieval culture or modern culture. Persons who want to better understand medieval culture should start with studying imprisonment of men today for having sex and being too poor to pay their legally mandated sex payments, the current practice of forcing men to pay “child support” to their rapists, and the current law of forced financial fatherhood.

clever and resourceful sensualist, alert to every opportunity for pleasure and heedless of any moral or ethical restraint in pursuing her opportunities. … Gilote never shifts her ground or role, never faces opponents as clever or more cunning than she is; she not only keeps full control of all her lovers but teaches other women to do the same.

[3] In the second line (l. 164) of the quote, I’ve translated talent as “desires,” rather than “wants.” That choice seems to me to translate better the resonances of the Old French text.

[4] Ne mai no lewed lued libben in londe (commonly known as Satire on the Consistory Courts) ll. 4-6, 33-6, from Middle English trans. Fein (2014) vol. 2, Art. 40. The subsequent quote is from id. ll. 61-72. Scattergood (2002), p. 32, describes Satire on the Consistory Courts as a “highly literate piece of work. … Only a poet of great technical proficiency and confidence could write in this way.” Scattergood emphasizes the contrast between the narrator’s illiteracy and the court officials’ dominating use of texts and writing. The poem thus sharply contrasts its form and content.

The relation of Satire on the Consistory Courts to broader issues of men’s social position hasn’t been adequately appreciated. Scattergood notes that the poem includes allusions to men’s subservience to women in fin amour (courtly love). Id. pp. 35-6. The consistory courts are a public institution that subordinates men’s sexuality to women’s interests.

[5] Revard (2004), p. 123, describes the narrator as a “self-satirizing lecher.” Revard also explains that women fall short of being “theoretically perfect creatures … most often, because men are trying to seduce them into it.” On the other hand, Revard contrasts “Through-the-Looking-Glass Good Women” with “the sexiest Bad Girls.” Id. 121. Self-satire runs deep in such analysis.

[6] The Ludlow scribe of MS Harley 2253 arranged the texts of the anthology in a way that provides a variety of perspectives on medieval men’s social subordination to women. For example, the Life of Saint Marina (Art. 32) shows men’s vulnerability to a woman’s false accusation of rape. Supporting such injustice is men’s belief in women’s moral superiority (The Poet’s Repentance, Art. 33). Men’s oneitis for women (The Fair Maid of Ribblesdale, Art. 34; A Beauty White as Whale’s Bone, Art. 36) also contributes to men’s subordination to women.

[image] Men held in stocks. Adapted from photograph from the Builth Wells Historical Pageant, Aug. 11, 1909. Photograph by P.B. Abery. Record no. 3590090 from the P B. Aberty Collection. Dedicated to the Public Domain. Thanks to the National Library of Wales (Llyfrgell Genedlaethol Cymru) and Wikimedia Commons.

Revard, Carter. 2004. “The Wife of Bath’s Grandmother : Or, How Gilote Showed Her Friend Johane that the Wages of Sin is Worldly Pleasure, and How Both Then Preached This Gospel throughout England and Ireland.” Chaucer Review. 39 (2): 117-136.