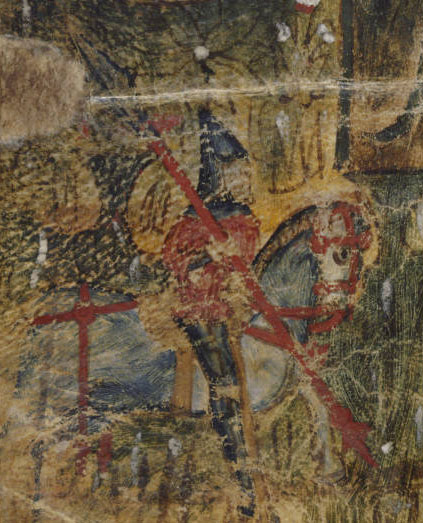 Gawain was half-asleep in the early morning when the lady of the house silently slipped into the guest bedroom and sat close beside him. Gawain pretended to be asleep. He pondered in his conscience what might happen with this beautiful woman. After a long while, he opened his eyes, turned to her, and gestured in wonder:

With chin and cheek full sweet,
both white and red in blend,
full lovingly did she him greet
with small laughing lips, as a friend. [1]

Teasing him as an unwary sleeper, she taunted that she would hold him captive in bed. She explained that her husband and his men were far off, the others in the household were asleep, and they were behind a closed, locked door. Gawain responded:

I shall work at your will, and that I well like,
for I yield me utterly, and yearn for grace,
and that is best, as I believe, for I am obliged by need.

Gawain was famous as a courageous warrior and a lover. The lady recounted his renown. She then consented to being forced:

You are welcome to my body,
your own will to avail.
It behooves me of pure force
your servant be, and I shall. [2]

Gawain was a Christian. He was an honorable knight. Invoking God, Mary, and Christ, he resisted the temptation of her body by pledging her the pleasure of his speech and promising to serve her with acts of knightly violence against men.

Thus they talked of this and that till mid-morning passed,
and ever the lady let on that she loved him much.
The fighter fared with defense, and feigned full fair.

The lady decided to leave. She got up from the bed, and then cuttingly said to him:

That you be Gawain, it goes against what I know. [3]

What of the famous lover? Gawain disingenuously inquired why she wondered who he was. She questioned his ardor in the guise of courtesy:

One so good as Gawain is rightly considered,
with courtesy enclosed so completely in himself,
could not easily have lingered so long with a lady,
but he had craved a kiss, by his courtesy,
by some touch of some trifle at some tale’s end.

“I shall kiss at your commandment, as a knight should,
and more, lest he displease you, so plead it no more.”
She comes nearer with that, and catches him in arms,
bows lovingly down and the liegeman kisses.
Either the other they courteously entrust to Christ.
She goes forth to the door without din more.

A man’s best defense against sexual temptation is acting like a self-abnegating servant to women. “As you wish, Buttercup,” tends in reality — medieval and modern — to deflate the sexual desire of women and men.

Gawain fell to the temptation of believing a beautiful woman. Acting as the courtly, servile man, Gawain successfully chilled the lady’s sexual overtures. But she then promised Gawain means of saving his life. She offered him a green girdle — a lace sash she had wrapped around her waist. She declared:

Whatever gallant is girt with this green lace,
so long as he has it neatly fastened about,
there is no horseman under heaven to hew him that could,
for he can not be slain by any stratagem upon earth.

Those who want to save their life will lose it. [4]

Gawain took the girdle from the lady and kept it. He later sorrowfully confessed and repented of that fault. Gawain was less than perfect. So too is every human being, even beautiful women. Gawain lamented:

It would be a gain
to love them well and believe them not, if a servant could do so. [5]

As Gawain recognize, such love isn’t possible. Men loving according to courtly ideals tend to believe lies.[6] The lesson for men is to love truly, and not believe that beautiful women are any more perfect than men themselves. 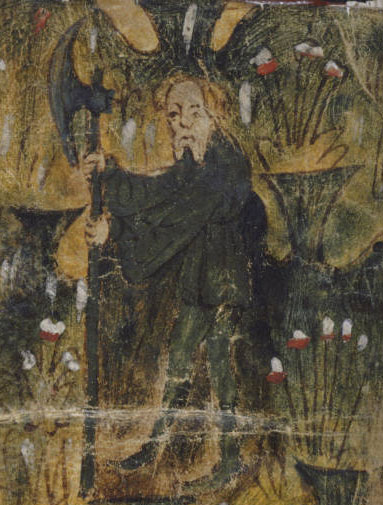 Sir Gawain and the Green Knight, this work written in English probably late in the fourteenth century, begins and ends with reference to the destruction of Troy. Thousands of men died fighting over Helen at Troy. Sir Gawain and the Green Knight makes no explicit mention of Helen. Yet it concludes by relating the debacle at Troy to a recurring pattern of history and an exit from that history:

Once the siege and the assault was ceased at Troy,
as it is.
Many adventures here-before
have fallen such as this.
May he who bore the crown of thorns
bring us to his bliss! [7]

The Christian romance is completely unlike a chivalrous knight completely subservient in love to his lady, she who is a person as human as he. Men ultimately resist the temptation of believing beautiful women by aspiring to a higher love.

[2] When visiting Gawain in bed the next day, the lady again suggests that he force her sexually:

“By my faith,” said the merry gal, “you cannot be denied.
You are stout enough to constrain with strength, if you like,
if any were so churlish that she would deny you.”
“Yes, by God,” said Gawain, “good is your speech,
But threat does not thrive in the country where I live,
nor each gift that is not given with good will.
I am at your commandment, to kiss when you like.
You may take one when you will, and leave when you please.

The quoted line is from a passage associated with the literature of men’s sexed protest. In the context of Sir Gawain and the Green Knight, the presence of themes of men’s sexed protest has generated “strange and strained interpretations.” Dove (1972) p. 20. Men’s sexed protest has tended to be unfairly disparaged throughout history. The relevant passage actually is an important, integral part of Sir Gawain and the Green Knight. Lucas (1968), Fletcher (1971). It’s also consistent with the prior literary figure of Gawain. Dove (1972). Apparently having suffered harm from a woman’s guileful love, Gawain told Lady Bertilak that he had no lover, and wouldn’t accept one for awhile (ll. 1788-91).

Once the siege and assault had ceased at Troy,
the burg battered and burned to brands and ashes,
the trouper that the tricks of treason there wrought
was tried for his treachery, the truest on earth.

ll. 1-4, id. p. 3. The first line of the poem is thus nearly identical to the first line in the concluding text quoted above. The “trouper … tried for his treachery,” probably meaning Antenor, is never explicitly identified. That obliqueness and the echoing of lines increases the salience of Troy and of missing reference to Helen.

The first stanza ends with Felix Brutus settling Britain. That changed nothing:

Where war and wrack and wonder
have often flourished there-in
and oft both bliss and blunder
have ruled in turn since then.

Ingledew, Francis. 2006. Sir Gawain and the Green Knight and the Order of the Garter. Notre Dame, Ind: University of Notre Dame Press.