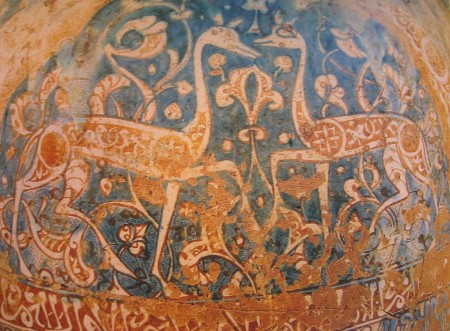 Nazhun, a twelfth-century woman poet from Granada, wrote a muwashshah that illustrates key points of heterosexual seduction. A muwashshah is a love poem written in classical Arabic, except for the colloquial or vernacular concluding stanza.[1] The rise of chivalry of medieval Europe promoted oppressive, burdensome, and ineffective practices for men seeking women’s love. Nazhun’s muwashshah, in contrast, shows love tactics that the modern empirical science of seduction has validated.

A tender young thing, she would have refused the advances
of anyone else.
But he loves her then gives her the cold shoulder [2]

Another teaching, contrasting strongly with the servile masculine abasement of chivalric behavior, is the man behaving as if he were dominant:

But the more I longed for his submission in passion,
the more he grew haughty and aloof.

what has made my body ill is
his fixed gaze

Dread game and freeze-outs stimulate women’s desire through raising the salience of a man’s sexual options and creating fear of separation:

He turns my heart over the live embers of the tamarisk
while he’s preoccupied.
May God preserve a beloved who has gone away,
fearing separation.
Good news of him arrived
so my chest opened up
And my heart burst out, rejoicing,
but I could not tell…

In a muwashshah, the poem’s lover tends to be a man. The beloved can be either a man or a woman. Sometimes grammatically masculine pronouns are used for a female beloved. Determining the sex structure of a muwashshah can be difficult. However, read with appreciation for the modern empirical science of seduction, Nazhun’s muwashshah clearly represents a woman yearning for a shrewd, elusive man, her beloved.

A master of seduction encourages a woman to construct him imaginatively. Women tend to imagine beloved men as women and with women’s wants. In Nazhun’s muwashshah, the woman poet imagines her beloved man with images of feminine beauty. He is a fawn, an houri, a gazelle:

By God, who shaped him out of beauty’s essence,
one of a kind.

She imagines him to be what she wishes she were.

He desires me so long as he does not see me,
he desires me.
But when he sees me he turns his back
as if he doesn’t see me. [3]

Interpreting a more figuratively complex stanza of Nazhun’s muwashshah, a scholar insightfully observed that the beloved is “a bit of a cad.”[4] Men who act like cads more effectively stimulate women’s desire than do pliant nice guys. That truth can barely be acknowledged publicly today. But in twelfth-century Andalusia, Nazhun’s muwashshah exquisitely presented a man’s successful seduction of a woman.[5]

[1] A muwashshah’s concluding stanza, known as the kharja, is either in colloquial Arabic or a Romance vernacular. The muwashshah form also exists in medieval Hebrew literature. The term muwashshah has variant transliterations  muwashshaha and muwashshahah. Hammond (2010) uses muwashshaha. I use muwashshah because that is by far the most popular transliteration on the Internet. Popularity isn’t the same as correctness, but popularity is relevant to effective conventions in communication.

[3] The kharja is set up  with explicit reference to an anonymous maiden’s voice. In the muwashshah immediately following Nazhun’s muwashshah in the collection ‘Uddat al-jalis, the exact same kharja is presented as the words of the poet (“So I sang…”). The poet is anonymous. Whether the poet of that muwashshah is a woman or a man isn’t clear. Id. pp. 163-64.

[4] Id. p. 165. In another elaborate reading, Hammond interprets an oblique use of the root penis (dh-k-r) in a verb taking as its object a woman as masculinizing her. But the verbal form also refers to pollination. The verb seems more sensibly interpreted as cherishing her sexually as a woman. Id. p. 167.

[5] In her interpretation of Nazhun’s muwashshah, Hammond concludes, “the aesthetic tradition in which its author was engaged was not man’s.” Id p. 168. The emphasis on man’s is Hammond’s. Studying women’s poetry (my emphasis) has generated continuous struggle to polarize gender within an ideological commitment to make that polarization unnatural. That seems to me not the most fruitful way to read poetry that women have written, or that men have written.

[image] Two gazelles on a vase at the Alhambra. Jarrón de las Gacelas, c. 1400. Thanks to Holycharly and Wikimedia Commons.