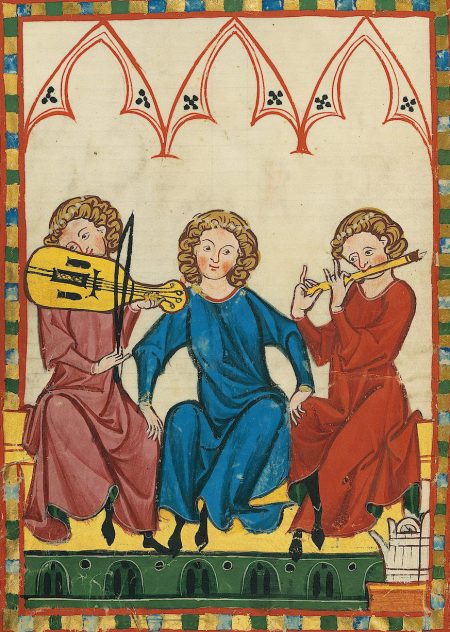 Joy, the love of the knight Mabonagrain from the time of his childhood, asked him to promise to give her a gift. She didn’t specify the gift. In modern Ovidian love literature, that’s called a “shit test.” Present-day teachers of love advise a response such as picking up a pebble, giving it to your girlfriend, and saying, “Here, a gift just for you.”

Who could deny his love
a gift? No courteous lover
Could refuse her any pleasure:
He’s obliged to oblige her, without
Hesitation, as best as he can.
So I said I would, of course,
But she said she also wanted
My solemn oath. So I swore it
And offered anything else
She might like, but my oath was enough.
I’d promised, but didn’t know what [1]

Joy then declared the gift to be that he would not leave the garden in which she and he lived until a knight came and defeated him in battle. Being defeated in battle implied being seriously injured or perhaps killed. In short, Mabonagrain’s girlfriend had bound him to rules only slightly less oppressive for a man than the modern, legal institution of marriage.

Mabonagrain pretended to like his circumstances even while he despaired of them. He explained:

I’d never known what she wanted
But once I saw what the dearest
Creature in the world craved,
What choice did I have? I’ve done
My best to pretend I approve,
Since once she knew I didn’t
Her heart would never be mine
Again — and God knows nothing
Could make me let that happen.
Which is how my lady has kept me
Here, all these years [2]

The choice of standing up for his own inherent human dignity as a man apparently never occurred to Mabonagrain. Instead, he remained in the garden as his girlfriend Joy’s captive. He perpetuated his captivity by killing many knights in battle. Such violence against men often serves to sustain gynocentrism.

In Arthurian romance, violence against men is pervasive. In this particular Arthurian romance, Erec, seeking fame and devaluing his own lifespan, claimed “Joie de la Cort.” That literally means “Joy of the Court.” In Celtic languages, joy seems to have been associated with women and “bright, pure beings.”[3] Mabonagrain’s girlfriend Joy appeared to be a bright, pure being. She was actually a man-oppressing woman who caused many men to die fighting against Mabonagrain.

Erec prevailed against Joy and the perverse meaning of “Joie de la Cort.” He defeated Mabonagrain in battle and blew a horn that gave Mabonagrain his freedom. The joy of a man breaking free from oppressive gynocentric captivity — such a rare event! — pleased everyone at court. It created a new, liberating meaning for “Joie de la Cort.”

Violence against men wasn’t necessary to create the liberating meaning of “Joie de la Cort.” Mabonagrain should have been wise enough to pass his girlfriend’s shit test. He should have been bold enough to walk out from under her rule.[4] Emancipating men ultimately depends on freeing them from mental slavery. Liberating men’s minds will bring “Joie de la Cort” across centuries and will delight women and men far and wide. Let that horn sound!

Raffel’s phrase “courteous lover” highlights the relation of this text to the man-abasing ideology of courtly love. The underlying Old French:

One is tempted to hypothesize that this damsel made her request of Mabonagrain because she wanted to keep him safe with her, secluded in their garden from the violence of the age.

The best cure for such failure in reasoning is reading some Old French fabliaux and learning to appreciate Boccaccio’s humanistic genius.

[image] Three court musicians, perhaps including Berthold Steinmar von Klingnau, who flourished in the second half of 13th century. Illustration from Codex Manesse, Zurich, made between 1305 and 1315. UB Heidelberg, Cod. Pal. germ. 848, fol. 308v. Thanks to University of Hiedelberg and Wikimedia Commons.