I pluck my twenty-stringed harp,
striking an octave cord;
and you just are, young Leucaspis. 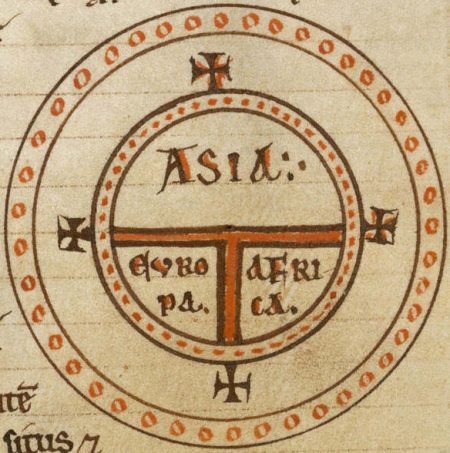 In the medieval European global schematic, Asia covered half the world, and Africa and Europe, each a quarter of the world. Alexander the Great, who had a keen sense of manhood, began his Asian journey of conquest by shooting an arrow into Asia. According to the twelfth-century Latin epic Alexandreis, Alexander told his generals that they could have Europe. Alexander declared that he wanted only Asia: “this one land is sufficient for me {michi sufficit una hec regio}.”[2] Learned medieval clerics would have immediately recalled God’s words to Saint Paul:

My grace is sufficient for you, for power is made perfect in weakness.

A Jewish Passover prayer recounts fifteen gifts of God. After each gift, the people recite the refrain “it would have been sufficient for us {דַּיֵּנוּ / Dayenu}. Alexander’s desire for glory, even if it had remained limited to just conquering Asia, contradicted Jewish-Christian gratitude and appreciation for God’s gifts. The fundamental issue transcends traditional Greco-Roman culture, Jewish understanding, and Christian belief. Men lacking appreciation for the beauty and wonder of their own masculine selves seek to achieve virtue in its oppressive, gynocentrically constructed sense. Men, as a result, lose their lives.

Like many men today, Alexander the Great grew up in difficult family circumstances. His mother Queen Olympias desperately wanted to have a child. The Egyptian pharaoh-magician Nectanebo, disguised as Macedonian street prophet, was brought in by a servant woman to help the queen. Nectanebo, who lusted after Olympias, proposed that she have sex with an incarnate God:

He is a man of middle age, with hair and beard of gold, and horns growing from his forehead, these also made of gold. You must make yourself ready for him as befits a queen. [4]

That very night Nectanebo came to Olympias in his godly costume and had sex with her. Olympias apparently thoroughly enjoyed the experience. The next day, she said to Nectanebo:

I beg you, prophet, make him make love to me again, and be sure to let me know in advance when he is coming, so that I may be better prepared for the bridegroom. [5]

Nectanebo asked Olympias to give him a room next to hers, so that he could “make prayers to him on your behalf.” Nectanebo then “went in to her as often as Olympias wanted.” Olympias became pregnant and gave birth to a son. That son was Alexander the Great. His cuckolded, nominal father King Philip was suspicious, because he had been on a trip and could not have contributed to the pregnancy. Nectanebo, however, partially succeeded in getting Philip to believe that Olympias’s pregnancy was the work of a god and that he should be grateful for it.

Alexander grew up with anxiety about who his father was. Philip noticed and remarked upon lack of resemblance between Alexander and him. Alexander himself surely also noticed this lack of resemblance. One day, Alexander led Nectanebo to a deep pit and pushed him in. Before Nectanebo died in the pit, he confessed to being Alexander’s father. According to the Alexandreis, Alexander as a twelve-year old declared:

Will I always be thought to be
Nectanebo’s offspring? Let no one call me bastard behind my back!

Even at twelve, Alexander ardently sought to be a warrior. Fighting other men would serve as an outlet for his anxiety and anger about fatherhood.

Alexander failed to recognize the true goodness of being a man. Part of the problem was bad teaching. Alexander’s teacher Aristotle, who couldn’t even manage his relationship with the beautiful Phyllis, advised Alexander:

Do not grow soft
with wanton luxury; and let not break your breast
love, sickness of the mind, which takes its joy in murmured assignations.
If you devote time to Bacchus and Venus, though you subdue all else,
you have come beneath the victor’s yoke. In madness perishes
the freedom of an idle soul. The burning forge of Venus
dulls the mind. Brawls and wars start with
the rule of drunkenness, which buries reason in a vile tomb.
Those two {Bacchus and Venus} weaken even a strong character.
Scant will for pleasure should be with those
who legislate for humankind and hold the reigns of the world.

Men should be taught better. Men have a human right to love. A glass of wine every now and then is no big deal. Shunning life’s true pleasures is foolish. Sing in joy and gratitude simply for the beautiful wonder of masculine being!

Alexander the Great deprived himself of his essential being through idolatrous striving. Alexander made himself into merely an instrument of violence against men. Lying in bed, gravely ill, Alexander expressed his hope for recovery: “I seek space not so much for life as for war {Me non tam uitae spacium, quam querere belli}.”[8] Alexander viewed his life  in terms of the socially constructed abstraction of glory:

Yet my mind is entirely unlike
your mind, nor do I wish to desist from what’s begun
or to conclude war. A lifespan does not contain me.
I measure myself neither by the space of the age nor its laws.
My glory exceeds this age’s measures.
By this alone I will to be the measure of your king.
Bastard spirits and ignoble hearts
believe the highest good is living a long life.
But I, the world’s one and only king, who count my triumphs
and not my years in thousands, if I correctly tally
Fortune’s gifts, and if I well contemplate my famous
deeds, I am already long-lived.

Medieval clerics knew well Isaiah’s words from God, “My thoughts are not like your thoughts.” They fully understood that the fundamental promise of God was abundant life — immortal life, and descendants as numerous as the stars in the sky.[10] Alexander the Great offered similar understanding, but with him in the position of God and conquest of space substituting for life.

Alexander aspired to be a god. He asked ascetic Indian philosophers how a man might become a god. They stated that a man becomes a god if he does something that men cannot do. That’s logically impossible. Another approach was for a man simply to start believing that he is a god, and to force others to assent to his divinity. According to the Alexandreis, that’s what Alexander did:

In addition, who could overlook his arrogating for his own father
the greatest Jove? He commanded belief that he was the offspring of Jove
and believed that he exceeded all humans in power.
A human who disdained his own humanity, it seemed a trifle
to him to be greatest among mortals.

When a Roman goddess of war came to Alexander with instructions not to pursue and kill the fleeing king Darius, Alexander rebuked her fiercely:

Although a seven-walled tower shield Darius,
although churning all around with burning waves,
Acheron should protect his fortifications with its sulferous banks,
Fortune shall not snatch him from me.

Medieval Christians believed that Jesus had descended into Hell to redeem the righteous. From that perspective, Alexander was willing to go to Hell to capture Darius.

Alexander’s acts were not only blasphemous to Christians, but also self-hating in a way in which men are particularly driven. At the end of the Alexandreis, the narrator observes:

At great danger to our souls,
while seeking wealth, while deceitful glory of things
flies on wings of vanity around our mortal eyes,
while grasping for fleeting honors now being sold,
we travel the fluctuating seas, and with hated lives,
commit head and goods into the tumid surge.

Alexander died an early death from poisoning. The poison within him might as well have been self-generated. Alexander serves as a warning for all men:

The Great One is an exemplum. For whom the world was insufficient space,
Five feet of hewn marble buried in the earth
Sufficed to make a tomb, in which that noble corpse
rested in scant soil.

Just being a man is sufficiently great for anyone. Alexander the Great lacked big understanding of his own nature.

there is great gain in godliness combined with contentment; for we have brought nothing into the world, and we can take nothing out of it. If we have food and clothing, with these we will be content.

[1] Anacreon, frag. 374, from Greek trans. West (1993) p. 105. Anacreon lived in the sixth-century BGC in Teos in the middle of the Mediterranean coast of present-day Turkey.

[2] Walter of Châtillon, Alexandreis 1.440-1, from Latin my translation. Here’s online Latin text of the Alexandreis.

[3] 2 Corinthians 12:9, with Latin text of the Vulgate. The Vulgate, the widely disseminated fourth-century translation by Jerome, was standard Christian bible in medieval Europe.

[11] Alexandreis 3.253-7. On Alexander’s questions to the ascetic Indian philosophers (gymnosophists / “naked” philosophers), Plutarch, Parallel Lives, Life of Alexander 64.9. That same question of Alexander to the gymnosophists about how a man can become a god is also preserved in Berlin papyrus 13044, from Greek trans. Stoneman (2012) p. 78.

[12] Alexandreis 5.252-5. Acheron signifies the traditional Greco-Roman understanding of the underworld / world of the dead. The Persian Bessus led a coup that killed Darius. Alexander then determinedly pursued Bessus. The Alexandreis declares of Alexander in pursuit of Bessus:

Alexandreis 8.337-8. A hammer is an instrument that delivers blows by taking blows. Men deserve better than being used as hammers.

The free people of Scythia desires nothing more than
what our first parent Nature has given. By that munificence,
no one serves power or commands desire.
Each person being her own law, protecting herself,
content with her possessions, seeking no one else’s,
produces beatitude. If more than this you seek,
your will exceeds the boundary that defines the end of beautitude.

No certain outcome
accrues to glory: for a little urn
contained the great man who would swallow worlds.

As depicted in the Alexandreis, Alexander the Great certainly isn’t “the greatest possible human being.” Cf. Lafferty (2011) p. 198. Kratz interprets the Alexandreis as “a clever and biting attack upon the desire for glory as vain and foolish.” Kratz (1980) p. 155. The poem ends with a triumphal dedication to Walter’s patron, William of the White Hands, Archbishop of Reims:

Surviving and living on with his poet,
William’s glory shall not die until the end.

Alexandreis 10.468-9. Walter and William apparently had a complex relationship. A thirteenth-century biographical gloss (in BNP MS lat. 8358, fol. 91v, translated and discussed in Townsend (2007) pp. 12-4) discusses sexual relationships and intrigue in a message to the Pope. Kratz insightfully perceives irony in the concluding triumphal proclamation. Kratz (1980) p. 155. Kratz also rightly indicates in the Alexandreis the importance of the Consolation of Philosophy, which is marital pleasure. Id., passim.

The Alexandreis surely is more than merely a negative exemplum or a mocking of Alexander. The Alexandreis engages with the epic problem of man-hating Amazons and poetically resolves it. Walter’s readers would have appreciated that effort, as should readers today. The Alexandreis also artfully addresses conceptual limitations in historical interpretation. Lafferty (1998). For a brief review of other recent scholarly interpretations of the Alexandreis, Lafferty (2011) pp. 197-9.

Forever you will be a pauper. A soul lacking nothing
is produced not by things but by sufficiency. Even
a little, if sufficient, lacks nothing.

[image] Medieval T-O world map schematic. In the inner circle, Asia is on top, Africa in the bottom right, and Europe (Evropa) on the bottom left. From a twelfth-century Latin manuscript of Isidore of Seville’s Etymologies. British Library (record number: c5933-06) Royal 12 F. IV, f.135v. Thanks to Wikimedia Commons.

3 thoughts on “Alexander the Great’s lesson for men: do less, value being more”