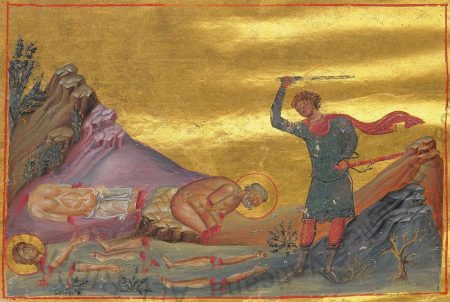 Kleitophon was a wealthy, wise, and well-regarded man among his fellow citizens in the magnificent city of Emesa in ancient Syria. Leukippe was a beautiful and virtuous woman from an eminent family of Emesa. Kleitophon and Leukippe married. Their marriage, however, wasn’t producing any children. Kleitophon disparaged his wife Leukippe for infertility:

she endured much grief and pain; for she was blamed by her own husband every day. [1]

A Byzantine text from no later than the tenth century taught that anger and anguish over infertility don’t belong in a truly Christian marriage. From a Christian perspective, infertility characterizes a relationship, not a person. Irrespective of physical limitations, Christian marriages are always fruitful.

Both Kleitophon and Leukippe were devoted to the ancient Greek goddess Artemis. Christians were then being harshly persecuted. One day a Christian monk disguised as a beggar appeared at their door. Leukippe sought to send him away, but he persisted. She then admitted him and told him of her grief:

how her womb was defective; and how, until that day, no one among the gods was to be found who could free her from these bonds and release her from the shame of childlessness. [2]

The monk told her:

If you listen to me, however, and choose to recognize the true God, who can raise up children from stones and dissolve the bonds of infertility, then you will benefit not only yourself, but you will also be able to benefit your entire bloodline, offering them true faith as their heritage. [3]

The monk told Leukippe that she could become a blessed mother to many through the rest of time. Leukippe wasn’t intellectual barren. She “paid attention to these words and offered her mind as fertile ground for the seed of his instruction.” Leukippe, however, was concerned for her husband:

if I convert to Christianity and abandon my ancestral faith, and if my husband does not follow my conversion, but continues to maintain his current beliefs, how might we, who must stay united, remain of the same mind if we are divided with respect to the most important matter?

The monk declared to Leukippe that her husband too would soon convert to Christianity. Leukippe thus decided to become a Christian.

Leukippe becoming a Christian led to her both not having sex and getting pregnant. Because in the ancient world spouses generally lacked freedom not to have sex with their spouses, Leukippe needed an excuse to avoid marital sex:

Leukippe soon realized that she was pregnant. She had become pregnant through a gift of the Spirit.

Leukippe’s husband Kleitophon soon too was filled with the Spirit. When Kleitophon realized that Leukippe had gotten pregnant, he said to her:

You seem to me, O wife, to have now pleased the immortal gods, and, because of this, you were now deemed worthy of their providence.

Leukippe in response reprimanded her husband:

Do not speak of gods, O husband — I do not want that. Rather, name the one and only God, the Lord and Creator of everything. He is the one who cares about you and us, and He is able not only to end infertility, but also to do easily whatever He wills.

Leukippe then went on to instruct her husband about “the God whom the Galileans honor.” No person has more instructive power over a man than his wife. Despite harsh persecution of Christians, Kleitophon followed his wife in converting to Christianity.

Leukippe gave birth to a son who became a noble and learned young man. The son was baptized and named Galaktion:

It was a name that securely predicted his future: for coming out of pure parents, Galaktion too became pure, a truly noble offspring of noble origins.

he easily went through all his elementary studies and learned all his grammar as well as Homeric skill, rhetoric and philosophy. He mastered astronomy so successfully that the movement of the heavenly bodies was not unknown to him. … Sent to schools and instructed in the most advanced studies, he surpassed even the teachers themselves by his assiduous nature.

Perhaps recognizing the oppressive structure of gynocentrism, Galaktion was reluctant to marry. His father, however, staunchly supported gynocentrism:

his father wanted to give him a wife as his revered mother {Leukippe} had died. So he found a girl who was very beautiful, the daughter of one of the high officials. Her name was Episteme.

As mates, men typically desire above all a beautiful, young woman. “Episteme” {ἐπιστήμη} in ancient Greek means “knowledge.” Galaktion’s father arranged for Galaktion to marry a beautiful, young woman, who also happened to be from a well-connected family and who honored learning with her very name. What more could a man want? Men typically endure the cruel gender role of soliciting amorous relationships. If a man aims too high in his amorous desire, he faces interminable, personal rejection. Because Galaktion’s father arranged for him to marry Episteme, Galaktion avoided a hurtful gender obligation that most men have to accept.

Galaktion initially wasn’t happy that his father had arranged for him to marry Episteme. Although a Christian, Galaktion’s father chose his son’s wife without respect to Christian values. Galaktion, in turn, apparently married Episteme to please his father:

Galaktion found it difficult to live with his wife and clearly avoided her embraces and invitations, as she did not share the same faith and had not participated in holy baptism. Because of this, he received much abuse from her family. They insistently scrutinized him about it.

Episteme reported their marital problem to her own father:

her father said to his son-in-law, “Say, young man, why have you not kissed your betrothed, as is customary for young men?” Galaktion pretended to be shy and said to Episteme with nobody in sight or within earshot, “Do you know, my lady, why I am not kissing you?” And she said to him, “No, my lord, and I am very grieved about this.” The blessed Galaktion said to her, “Because you are not a Christian, but if you were to receive holy baptism, then I will kiss you and I will call you wife.” She said to him, ” When you wish it, my lord, I will be baptized. As long as I receive what I long for.”

Only eight days after her conversion, Episteme and Galaktion consensually and enthusiastically embraced sexless marriage. Episteme had a dream in which she saw monks, nuns, and angels in a beautiful palace. She then suggested to her husband that they remain physically separate so as to devote themselves to God:

Could it be, my husband, that if we were to separate from each other and enlist with God, we would still be able to preserve our affection for each other undivided? Offer me this firm pledge and I will always stand by you, sharing in this decision.

Galaktion agreed to Episteme’s proposal that they pursue her dream. They vowed to each other “to never stand apart in their intent.” Then they gave all their possessions to the poor and entered sex-segregated, cloistered religious life.

Galaktion and Episteme’s sexless relationship was highly fruitful in Christian understanding. After they had established themselves in sex-segregated religious life, they were brought together in vicious persecution for their dedication to God in the Christian way. Together they courageously proclaimed their unalterable Christian faith in the face of torture and death threats. Then they were beheaded. In ancient Christian understanding, that was a gloriously fruitful way to die. Galaktion and Episteme were soon honored as saints. They have been so honored for more than a millennium.[4]

Christian couples can be fertile without the husband impregnating the wife. Kleitophon and Leukippe had their son Galaktion by the power of the Spirit after they had restrained from sex. Galaktion and his wife Episteme gave up physical intimacy while preserving their affection for each other.[5] They subsequently came to be honored as saints. Both of these couples continue to inspire Christian couples today, especially those struggling with a worldly understanding of infertility.

[1] Vita of Galaktion and Episteme, from Greek trans. Alwis (2011) p. 287. This vita was probably composed between the end of the fourth century and 886. Id. pp. 9-10. It survives in fifteen Greek manuscripts, with the earliest dating to the eleventh century. Id. p. 8. The manuscripts vary little in the text of the life. I’ll refer to this text of the vita as the “pre-Metaphrastic text.” Symeon Metaphrastes adapted this version in his tenth-century Menologion. Subsequently above I quote from both texts.

In the above quotes, I have made a few, minor, non-substantial changes to the translations to make them more easily readable for general readers.

[3] The reference to raising up children from stones comes most directly from Matthew 3:9. Ancient Greek mythology about Deucalion also refers to children being produced from stones.

[5] In the vita of Julian and Basilissa, which apparently was created between 431 and 525 GC, Julian and Basilissa made a vow of celibacy on their wedding night. They converted their houses into monasteries and nourished many persons in religious life. Alwis (2011) p. 6 (dating), pp. 157-248 (Greek text, English translation, and notes and commentary).