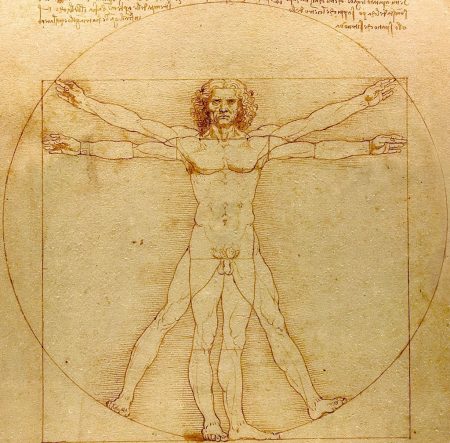 In cosmography from more than two millennia ago, heaven is a circle and earth is a square. Leonardo da Vinci’s famous, late-fifteenth-century Vitruvian Man drawing shows a naked man inscribed in a circle and in a square. The circle’s center is the man’s navel. The square’s center is the root of the man’s penis. Leonardo, now appreciated as a genius, understood that the center of a man’s earthly being is his penis.[1]

Leonardo built upon the work of the ancient Roman architect Vitruvius. In his work De architectura (On architecture), Vitruvius wrote:

The navel is naturally placed in the center of the human body. If a man lying with his face upward, and his hands and feet extended, is circumscribed, the circle will have his navel as the center and will touch his fingers and toes. The human body is not only thus circumscribed by a circle. It may be placed within a square. For measuring from the feet to the crown of the head, and then across the arms fully extended, we find the latter measure equal to the former. Lines at right angles to each other, enclosing the figure, will form a square. [2]

The navel as the center of the human body has cosmic correspondence. In traditional Greco-Roman belief, the oracle at Delphi was the site of the navel at the center of the world (omphalos). Jewish tradition described Jerusalem as the navel of the earth.[3] These beliefs were part of broader understanding of the human body as a microcosm of the universe. 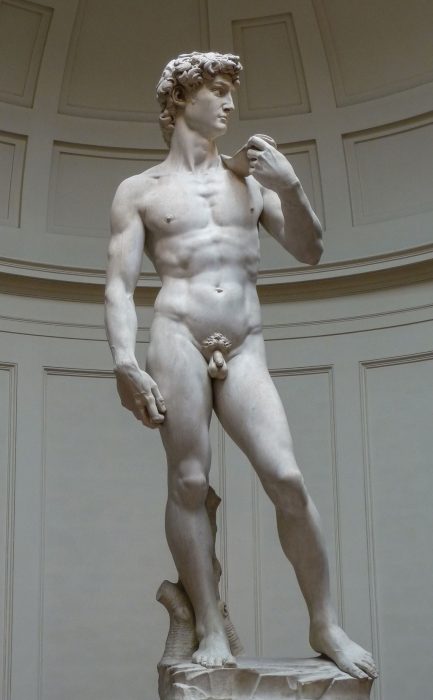 Bernardus Silvestris’s brilliant twelfth-century Cosmographia recognized the penis’s cosmic significance. Bernardus explicitly described creation in terms of the megacosmus (the physical universe) and microcosmus (man). In describing the creation of man, Bernardus emphasized the importance of man’s penis to women and to all of the physical universe.

he took fast hold upon the shaggy flanks
and then descended, down from tuft to tuft,
between the tangled hair and icy crusts.

When we had reached the point at which the thigh
revolves, just at the swelling of the hip,
my guide, with heavy strain and rugged work,

reversed his head to where his legs had been
and grappled on the hair, as one who climbs.
I thought that we were going back to Hell.

“Hold tight,” my master said — he panted like
a man exhausted — “it is by such stairs
that we must take our leave of so much evil.”

Dante and Virgil reversed direction in traversing Satan’s crotch because it is at the center of the earth. While Dante didn’t explicitly describe Satan’s crotch, he characterized it as frozen in ice. A late sixteenth-century illustration draws out the meaning. It shows Satan’s body with an empty space in the place that a man’s genitals normally occupy.[5] Satan is a castrated male:

Here we find Lucifer {Satan}, and with Lucifer the Augustinian idea that evil is the perversion, distortion, antithesis of good. … The grandeur of what Lucifer was stands in stark contrast to the monstrous vacancy of what he now is. … Lucifer’s irretrievably lost beauty — and the quantity of that lost beauty — provides the measure whereby we can construe his current ugliness.[6]

Castrating a man, whether physically or socially, deprives him and the cosmos of his masculine beauty. 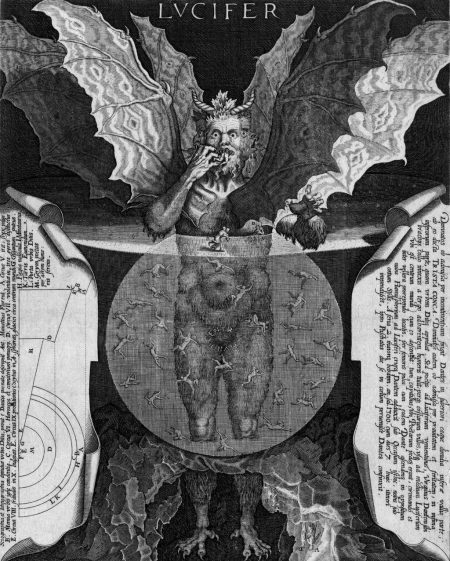 Within gynocentric society, castration culture constructs the demonic male. The center of man’s earthly being is his penis. In Heaven, man’s center rises to his navel, or perhaps even higher. Persons can aspire to Heaven and hope for a new creation that makes the earth like Heaven. But the reality of current earthly existence must be truthfully acknowledged. Castrating earthly men, whether physically or socially, doesn’t make them into Heavenly men. Castration culture creates a Hell on earth and makes men into demons.

[1] For a poignant recent interpretation of the Vitruvian Man, see Rich Brimer’s Threshold.

[4] Dante Alighieri, Divine Comedy, Inferno 34.73-84, from Italian trans. Allen Mandelbaum (1980). Both the Italian text and English translation are from the University of Virginia’s excellent World of Dante site.

Satan was frozen in ice up to his chest. Inferno 34.29. Carrying Dante, Virgil apparently climbed down a crack in the ice to Satan’s crotch. Ruda (2006) p. 326, n. 36, observes, “Dante’s focus on Satan’s groin seems not to have been addressed in modern scholarship.” The gynocentrism of modern scholarship supports such blindness. Ruda shows no awareness of castration culture, considers emasculation in terms of feminization and disparagement of women rather brutal physical abuse of men, and only slightly complicates conventional invocations of misogyny in support of dominant gynocentric ideology. See, e.g. pp. 327-8.

Subsequent thinkers challenged Vitruvius and followed Dante in placing a man’s crotch, specifically the root of his penis, at the center of this body. Lorenzo Ghiberti, writing his Commentarii about 1450, stated:

I still do not think that the navel is the center; it seems to me that this must be where the genital member arises, at the position of the man’s crotch. And it still seems to me that this center cannot be in any other than that said place.
{Ancora non mi pare del centro sia el bellico, parmi debba essere dove è ‘l membro genitale e dove e’ nasce, overo ov’è la inforcatura humana. Ancora mi pare el suo centro non possa in altro luogo poter porsi, altro che in detto luogo.}

Italian text and English translation from Salvi (2016) p. 266. Salvi has translated ‘l inforcatura humana as “the human’s crotch.” In context, a better translation is “the man’s crotch.” I’ve made that change above. Cf. Dante use of forcata (junction of lower limbs to trunk), Inferno 14.108.

In his Tabulae dimensionum hominis within his work De statua (On sculpture), Leon Battista Alberti ascribed the center of man “to the bone below which hangs the penis {ad os sum quo pendet penis}.” Salvi (2016) p. 259. Alberti wrote De statua in 1464.

[5] In the illustration, that empty space is explicitly labeled centrum mundi (“center of the world”).

[6] Barolini (2015). Castrating a man produces an evil man from a good man. Castration kills the creative dynamism of persons and societies:

The essence of Lucifer is indeed the essence of Hell itself, for Hell is the place whose denizens—because they sinned and did not repent their sins—are not afforded the opportunity to continue becoming. They are fixed, as Lucifer is fixed: fitto è ancora sì come prim’era {Inferno 34.120: “(he) is still fixed, even as he was before”}.

Id., reformatted slightly. Deprivation of becoming (being fixed) applies equally to women and men in Hell.

[images] (1) Vitruvian Man. Drawing by Leonardo da Vinci, made c. 1490. Thanks to Luc Viatour and Wikimedia Commons. (2) David. Marble sculpture by Michelangelo, made 1501-1504. Held in Galleria dell’Accademia (Florence). Thanks to Jörg Bittner Unna and Wikimedia Commons. (3) Lucifer. Engraving for Dante’s Inferno, Canto 34, by Cornelis Galle the Elder (Flanders), made c. 1595.  Adapted from a drawing by Lodovico Cardi, also called as Cigoli. The image apparently was included in a printing of Dante con l’espositione di Christophoro Landino, et di Alessandro Vellutello. Thanks to John Coulthart. Additional image sources here and here.

Salvi, Paola. 2016. “The Midpoint of the Human Body in Leonardo’s Drawings and in the Codex Huygens.” Ch. 19 (pp. 259-284) in Pedretti, Carlo, Constance J. Moffatt, and Sara Taglialagamba, eds. Illuminating Leonardo: a festschrift for Carlo Pedretti celebrating his 70 years of scholarship (1944-2014) Leiden: Brill.

4 thoughts on “castration is Satanic: penis at center of man’s earthly being”