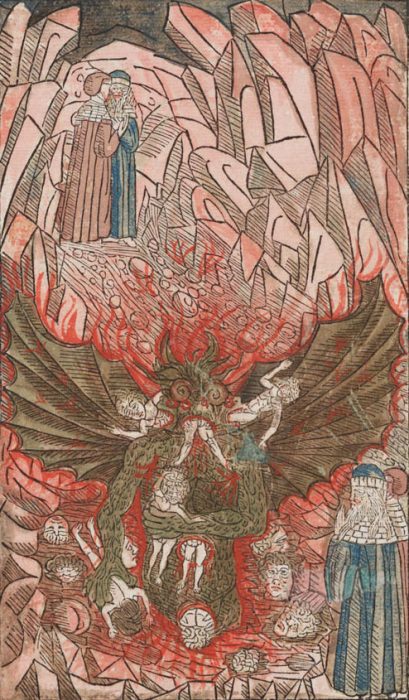 Hell is frozen over in the deepest pit of Dante’s Inferno. That’s odd. Hell freezing over is usually deployed as an impossibility in a rhetorical declaration. Dante’s Divine Comedy has long been revered as a literary masterpiece and a defining work of European literature. But why the hell is there ice in Dante’s Inferno? The answer may come from Buddhist meditation.

The twentieth-century American poet Robert Frost naturalized ice in the Inferno. In one of his most famous poems, Frost connected a personal sense of love and hate to pondering the end time (eschatology):

Some say the world will end in fire,
Some say in ice.
From what I’ve tasted of desire
I hold with those who favor fire.
But if it had to perish twice,
I think I know enough of hate
To say that for destruction ice
Is also great
And would suffice.

Frost’s personal library contained four editions of Dante’s Divine Comedy.[1] Frost’s poem has nine lines, and Dante’s Inferno has nine circles of Hell. Frost uses a modified form of the terza rima (three-line rhyme group) of the Inferno. Frost gives ice the more negative valiance, just as Dante froze over the place for the worst sinners. Yet hate being cold, and reason being more destructive than passion — those are romantic platitudes. Frost doesn’t really explain ice in the Inferno.

I beheld there men and women with their hands and feet cut off and naked, in a place of ice and snow. Worms devoured them. When I saw it, I wept and asked, “Who are these, Lord?” He said to me, “These are they that injured the fatherless and widows and the poor, and didn’t trust in the Lord. Therefore they pay without ceasing the due penalty.” …

I looked from the north to the west and saw there the worm that never sleeps. In that place was gnashing of teeth. The worms measured a foot and half, and on them were two heads. I saw there men and women in cold and gnashing of teeth. I asked, “Lord, who are they in that place?” He said to me, “These are they who say that Christ didn’t rise from the dead, and that our flesh doesn’t rise again.” I inquired, “Lord, is there no fire nor heat in this place?” He said to me, “In this place is nothing else but cold and snow.” He further said to me, “Even if the sun rose upon them, they would not be warmed, because of the excessive cold of this place and the snow.” [2]

Walking on, we came to a valley of great breadth, depth, and infinite length. On the left it appeared full of terrifying flames. The other side was no less horrid for violent hail and cold snow flying in all directions. Both places were full of human souls, which seemed by turns to be tossed from one side to the other, as if by a violent storm. When the wretches could no longer endure the excess of heat, they leaped into the middle of the cutting cold. Finding no rest there, they leaped back again into the middle of the unquenchable flames. [4]

The narrator’s remarks underscore the association of Hell with flames:

I began to think that perhaps this might be Hell, of whose intolerable flames I had often heard talk. My guide, who went before me, answered to my thought, saying, “Do not believe so, for this is not the Hell you imagine.” … That valley you saw so terrifying for consuming flames and cutting cold, is the place in which the souls of those are tried and punished, who, delaying to confess and amend their crimes, at length have recourse to repentance at the point of death [5]

The alternate punishments of hot and cold are part of an figure of Purgatory. Hell in this vision is fiery, not frozen over.

Medieval European literature prior to Dante’s Inferno doesn’t offer any vision of rationalized icy punishment. Alternating punishments of hot and cold occur in Walter of Châtillon’s Alexandreis and Lotario dei Segni’s De miseria humanae conditionis — two highly influential, twelfth-century Latin works. Those depictions probably represent Bede’s influence. Vincent of Beauvais’s thirteenth-century Speculum Historiale includes simple accounts of visions mentioning cold punishments in Hell: rivers of ice-cold water, torments of heat and cold.[6] Such torments are more realistic than visionary. No one in Europe prior to Dante seems to have thought deeply about including ice within the well-known intolerable flames of Hell.

Ice in the Inferno, however, has well-pondered precedent in Buddhist eschatology. Narakas in Buddhism are places of torment analogous to Hell. Buddhist texts from no later than the fifth-century GC describe eight cold Narakas (“cold Hells”) and eight hot Narakas (“hot Hells”). One of those cold Hells is named Arbuda:

Arbuda or Chubur-chan. The bodies of the sattvas who fall into this Hell are frozen to bubbles, as foam is formed in the sea, when agitated by high winds. Unbelievers in Buddhism, particularly those who hold that nothing will exist after death, and that death is the end of existence, are destined to fall into the Arbuda or Bubble Hell, which is a gloomy, deep, cold valley filled with ice. Here they are continually smitten by a freezing wind, which penetrates to the bones. [7]

Buddhist descriptions of cold Hells occur in long, complex, learned cosmological texts. These include the Abhidharma-kosa {Treasure House of Higher Knowledge}, written in Sanskrit in the fourth or fifth century GC, and the Dirghagama (Long Discourses), Sutra of Cosmology, translated into Chinese in 414 GC. In intellectual scope and intent, these works’ depictions of cold Hells are the most similar prior literature to Dante’s complex figure of ice in the Inferno.

Give up all hope to look upon the sky!
I come to lead you to the other shore,
into eternal darkness — fire and ice!

A underworld of fire and ice has little precedent in surviving European literature. Those who would consider Dante and Buddhism only when Hell freezes over should show more respect for the Inferno.[10] 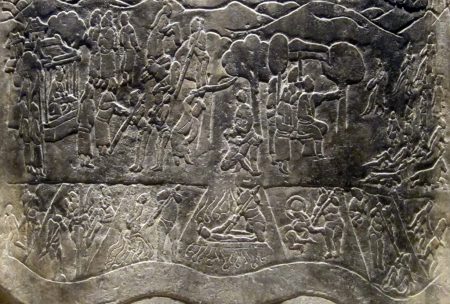 [2] Apocalypse of Paul 39, 42, from Latin trans. M.R. James for Clarendon Press, 1924. I’ve modernized the English. Bremmer (2009), pp. 303-7, dates the work about 400 GC in Egypt for the original Greek version, and the end of the fifth century for the Latin translation. A prevalent, less substantiated dating for the original version is the middle of the third century.

Here’s a table of sins and punishments in the Apocalypse of Paul, with each row (sin / punishment) categorized by temperature (fire, snow, or not specified). I’ve adapted the table from Bremmer (2009) pp. 307-8.

[3] On Paul journeying to Hell:

Later, the Chosen Vessel also went
to bring back comfort, strengthening the faith
which is the first step on salvation’s way.
{Andovvi poi lo Vas d’elezïone,
per recarne conforto a quella fede
ch’è principio a la via di salvazione.}

[6] Vision of the Boy William (dated 1146) describes in Hell ice-cold rivers as tortures. The Vision of Tundale (Irish, dated 1149, here’s the Middle English version in modern English) has in Hell mountains of fire and ice, as well as cold punishments. Gardiner (1989) pp. 156-7, 169. Both William’s and Tundale’s visions are in Vincent of Beauvais, Speculum Historiale, Book 27. The Vision of Orm (England, 1125/6) reports torments of heat and cold. The Vision of the Monk of Eynsham (dated 1196) uses a figure of cold punishment that parallels that in Bede’s Vision of Drythelm:

The side of the mountain overhanging one part of the lake sent fire up to the the heavens, on the opposite promontory of the same hill there was such an intense cold, caused by snow, hail, and raging storms, that I thought I had never seen anything more torturing than the cold in that place.

Adapted into modern English by Gardiner (1989) p. 206. Morgan (1990) provides a less accessible review of popular visions of Hell before Dante than does Gardiner’s Hell Online.

Morgan (1990), Ch. 4, finds considerable continuity in types of sins punished in popular European visions of Hell through to Dante’s Inferno. Morgan, however, ignores the distinction between hot and cold punishments. Barolini (2015) notes that Dante “is original in producing ice at the pit of hell.”

The Buddhist Hell which is the sixth state in the Samsara Chakra, or “World Cycle,” is described in Buddhist literature with a minuteness which bespeaks a vast amount of labour on the part of the monks. The terrors depicted far surpass anything of Dante’s Inferno, the tortures are more excruciating than the mind ever conceived, not excepting the darkest days of the inquisition.

People in snow mountains with an icy wind blowing; their skin cracks but death, though they pray for it, does not come.

The English chroniclers Ralph of Coggeshall and Roger of Wendover preserved the Vision of Thurkill (dated 1206). Among European eschatological visions, Thurkill’s vision uses cold most similarly to cold Hells in Buddhist texts. Consider:

The second court contained similar cauldrons, but these were filled with snow and cold ice, in which the spirits were tortured by the dreadful cold in intolerable agony.

The identity of certain fundamental conceptions about Hell, found in East and West, has very ancient origins.

Duyvendak (1952) p. 313. Those common conceptions extend all the way to eastern Eurasia.

The fifth cubicle from the left in the lowest register of the Cosmic Buddha’s front design may represent a form of the Buddhist “Hell of the Dark-Cold.” That cubicle shows:

Two sinners are obliged to plunge into some liquid substance. One has immersed already the top-half of his body, and his legs are visible kicking in the air. An impassible warden pushes them down.

There is a round clear pool of water, with small demons attending on either side, and shouting. Dragging a man by the arm, they throw him into the water, where a large fish with a big head swallows him up in one gulp. And so on, one man after another.

Leidy, Denise Patry. 2008. The art of Buddhism: an introduction to its history & meaning. Boston: Shambhala.