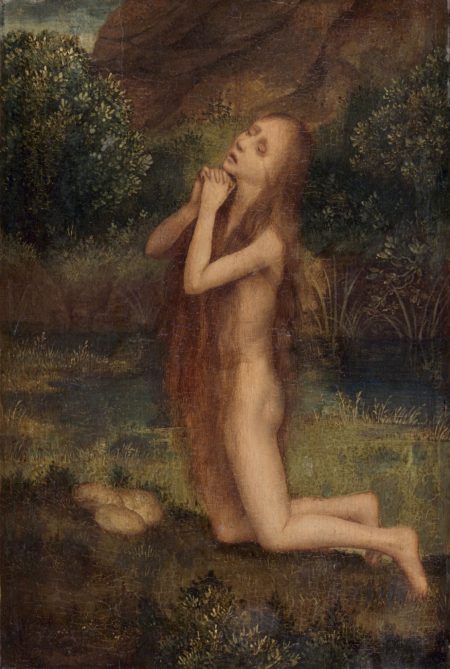 Saint Mary of Egypt has been honored around the Mediterranean and beyond from the seventh century to the present. The early Latin life of Mary of Egypt indicates that she raped a boatload of men. A medieval Spanish poetic version of her life recounts that she incited considerable violence against men. But the great French theologian and poet Hildebart of Lavardin, writing about the year 1100, described Mary of Egypt as giving gifts to men who had sex with her. Saint Mary of Egypt thus deserves to be recognized as a leading woman in the pursuit of fundamental gender equality for men.

According to the medieval Spanish life of Mary of Egypt, she was an extraordinarily beautiful woman. That account, drawing upon an earlier account, declares:

From her time on
no one else so beautiful was born;
neither queen nor countess,
no other like her has been seen.
She had round ears,
white as ewe’s milk.
Black eyes and eyebrows,
a brow white to the hairline.
Her face was tinted with color
like a rose in flower;
her mouth beautiful and well-proportioned.
Her gaze was very beautiful.
Her neck and her breast
were like the flower of the thornbush.
Her breasts showed healthy development;
they were like apples.
Her arms, her body, all of her
was white as crystal.
Her figure was well-proportioned;
she was neither fat nor very thin,
she was not tall or short,
but just the right height.

Mary of Egypt also dressed to kill. She wore much jewelry, expensive gowns, an ermine mantel, and shoes of cordovan leather decorated with gold and silver. Her shoes had silk laces. In short, Mary of Egypt was outwardly as beautiful and glamorous as Helen of Troy.

Outward beauty, while quite pleasing, isn’t everything that men value in women. Helen of Troy caused an enormous number of men to die. According to her medieval Spanish life, so too did Mary of Egypt in Alexandria:

The young men of the city
she so delighted with her beauty
that each day they came to see her
from whom they could not keep away.
So many companions came there
that the games turned to hard feelings.
At the gates, in the doorways,
there were great sword fights;
the blood which flowed from them
ran down the middle of the street.

When she saw the sad situation
no compassion gripped her.
Whoever was the most crafty,
he was her friend.
She welcomed inside the one who conquered;
she grieved little for the one who died.
If two friends died,
she had fifty who lived.
For the soul of one who died
she would give no more than a laugh.
Those who were hurt because of her
never received a visit from her.
She preferred having sex with the healthy
to visiting the sick.

In Alexandria, Mary of Egypt had sex with many men. Yet her sex work lowered social welfare:

Mary was in Alexandria.
There she corrupted herself night and day.
…
The moment she entered there
the whole town was stirred up.
So much blood was spilled
that the whole town was diminished,
and the towns around there
were all in great terror.

Oppressive sex regulations now imposed on men in college probably have the benefit of reducing violence against men. But one can surely see a still more excellent way.

In today’s scholarship, Saint Mary of Egypt is depicted as today’s womanly ideal. She’s instantly recognizable as the aspirational Everywoman:

Mary of Egypt is neither of the nobility, nor wife, nor mother, nor virgin, nor educated, nor enclosed in a monastery, not exactly a prostitute. … Mary of Egypt is a strong-willed, passionate, non-conforming and autonomous woman. She breaks with her parents when she is twelve, rejecting her family of birth and the prospects of marriage to a rich husband. She never sees her family again. Rather than live off her lovers, she supports herself by spinning during the time she lives in debauchery in Alexandria. She trades her favors {allowing men to have sex with her} for the trip to Jerusalem, but even so, she pays her own way. [2]

Women should pay their own way. Moreover, on dates women should also buy men dinner if for no other reason than as reparations for the historical, structural gender inequality in paying for dinners on dates. Yet scholars haven’t understood the moral lesson that Saint Mary of Egypt distinctively provides to women and men today. Consider this moral lessons:

The medieval women and men must have learned from her story not only the wideness of God’s mercy, but the variety of paths, some quite circuitous, by which they could come to God, if only they loved as passionately and willed as strongly as Mary of Egypt did.

That’s ridiculous. Medieval women and men fully recognized passionate and strong-willed women. Women and men today might pray that God’s mercy is wide enough to encompass prominent news reports accusing nearly a quarter of men of having raped women. To understand the most important moral lesson in the story of Mary of Egypt, one must turn to the medieval Latin life of Hildebert of Lavardin.

Writing about the year 1100, Hildebert of Lavadin depicted Mary of Egypt as a progressive activist working to advance gender equality for men. Hildebert perceptively sympathized with women’s lives. He poetically presented first-personally Mary’s arrival in Alexandria:

When I reached that location, I had the status of a common whore.
Nor was that enough, since, when a man was lacking for me,
I roamed about the districts and, solicited by no one, I solicited,
notorious in attire, roving in eye, lewd in expression

Mary rejected men’s double burden in the sexual division of labor and reward. In addition to taking the initiative to solicit men, she also wore sexy attire, walked seductively, and lewdly expressed herself. She thus worked actively to provide men with a more equal share of sexual pleasure. She also learned to sing sexually suggestive songs like the highly alluring singing slave girls of the classical Islamic world. To advance gender equality in sex, she reached out to sexually marginalized men: “worn out dancers {salitores exhaustos}” and “older men {seniores}.” Most importantly, Mary of Egypt worked to acquire material goods and then gave gifts to men for having sex with her:

I enticed young men and bought their presence with any sort of gift,
and among my partners in sin I distributed individual gifts
which needle and spindle might yield for our use in this life.

Under dominant gynocentric ideology, men are commonly forced to pay women for sex. Only men with outstanding guile manage to overturn the practice of men paying women for sex. Truly saintly women make such guile unnecessary. Saint Mary of Egypt, with exemplary charity, love, and concern for social justice, paid men for having sex with her. That’s a moral lesson that all women and men should study today.

The manuscript of the poem (Manuscript K) dates from the fourteenth century. The poet who wrote the text isn’t known, but apparently authored it in the first half of the thirteenth century. It translates, with some additions, an earlier Old French text of the life of Mary of Egypt. Id. p. 42.

Schiavone’s edition of the Old Spanish text inserted modern capitalization and punctuation. It expanded abbreviations with letters in italics. For ease of reading, I’ve rendered those letters in normal type. In addition, I’ve replaced the Tironian note 7 with “y”.

The three subsequent quotes above are from this medieval Spanish verse life of Mary of Egypt. Their citations are (by verse numbers): 171-80 (The young men of the city…); 181-94 (When she saw the sad situation…); 195-6, 199-204 (Mary was in Alexandria…). I’ve made a few, minor adaptations to Feiss’s translation to make it clearer or to track the Old Spanish more closely.

[3] Hildebert of Lavardin, The Life of Blessed Mary of Egypt {Vita Beate Marie Egiptiace} 360-4 (Canto 6). Latin text from Larsen (2004), English translation adapted from Pepin & Feiss (2005) p. 89. Id. translated the first line of the quote as “When I reached the place, I was considered to be a public place for sin.”

Hildebert of Lavardin was highly learned in classical Latin literature and a leading poet of his time. Testifying to its influence, ninety manuscripts of Hildebert’s Vita Beate Marie Egiptiace have survived. Id. p. 23, n. 48.

The references to “worn out dancers {salitores exhaustos}” and “older men {seniores}” is from Vita Beate Marie Egiptiace, l. 374. The subsequent quote is from id., ll. 376-8, sourced as described for the first quote.

[image] Saint Mary of Egypt. Oil on panel painting by Quentin Matsys. Made c. 1520-30. Preserved as cat. 366 in Philadelphia Museum of Art. Also on Wikimedia Commons.

Schiavone de Cruz-Sáenz, Michèle. 1979. The life of Saint Mary of Egypt: an edition and study of the medieval French and Spanish verse redactions. Barcelona: Puvill.