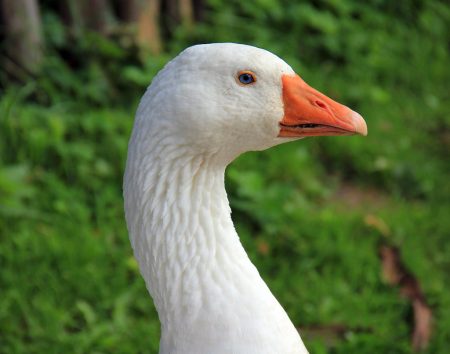 In early fifteenth-century Italy, a young peasant man was walking to Florence to sell a goose. The goose had a long, thick neck. A woman noticed him:

Considering herself to be witty, she for the sake of laughing asked the man how much he would make for the goose. He said to her, “What you would very easily yield.” “What’s that?” she asked.

Women generally are more socially sophisticated than men. With words or even just looks, women rule over men. But this peasant youth was destined to be different.

This peasant youth responded with the roguish manliness that actually makes men more attractive to women. He spoke only a few blunt words:

The woman became intrigued and excited. With many words she denied her interest and advanced their affair with a show of reluctance:

“You are joking,” replied the wife. “But let’s go into my house and agree on a price.” They went into the house. When he remained steadfast in his will, the wife agreed to his price.

The wife was a woman who wanted to be on top. The youthful peasant with guile acquiesced:

But when with her in the top position they had finished sex and she requested the goose, he refused to give it over. He said that he had not taken her, but she was pressing down on him.

Like many men in relation to public claims about gender inequality, the woman interpreted the situation superficially. The peasant youth understood gender more realistically. He appreciated the metaphorically disadvantaged position of men’s sexuality and used it to his advantage.

The peasant youth acted with interpersonal guile far superior to that of most men. He agreed to a reversal of gender positions:

Therefore they revived their bout, and the youth performed the service of rider. Again according to their agreement, the wife requested the goose. The youth refused, asserting that he was now equal with her. He had not received the price, but had removed the injury the wife had inflicted upon him in the earlier instance when she had subdued him.

In short, the man insisted on reparations for the sexual injury that the wife had inflicted upon him, as sexual injury is commonly defined in gynocentric society. That’s a crafty start to men receiving adequate compensation for their erection labor.

After their wrangling had gone on for a long time, the husband came in and sought to know what all the controversy was about. “I desired,” said his wife, “to prepare a well-furnished dinner for you, but this cursed one has impeded me. We agreed upon twenty soldi. Now that he has entered the house, he has changed his mind, and demands two more.” “Eh,” says the husband, “that such a small matter should impede our dinner! Come in,” he said, “here is that which is pleasing.” Thus the peasant left with the price and having had sex with the wife.

Since the peasant youth had sex with another man’s wife, he didn’t even run the risk of forced financial fatherhood. This peasant youth was far more knowledgeable about the ways of the world than many men who undergo many years of higher education today.

Men are overwhelmingly below women in society. If men are ever to escape from the bottom, they must learn how to deal with women’s desire to be on top and the metaphorically disadvantaged status of men’s sexuality.

The above story and quotes are from Poggio, Facetiae 69, “Of a peasant man who had a goose for sale {De rustico qui anserem venalem deferebat},” Latin text from Poggio (1879) vol. 1, pp. 111-3, my English translation. Here’s the Latin text in a machine-readable form.

[image] Head and neck of a goose. From image released under CCO Creative Commons license thanks to AnnaER and pixabay.