After much drinking, Jove, the nominal head god in charge of the cosmos, put aside his onerous concerns and dared to poke his boss wife Juno with gentle teasing. He told her that women receive more pleasure from sex than men do. Juno sternly disagreed. They asked Tiresias to pass sentence on their dispute, for he had personal experience as a double transsexual. According to Ovid’s Metamorphoses, Tiresias’s expert judgment affirmed the subsequently suppressed truth that the sexual division of labor and reward favors women. 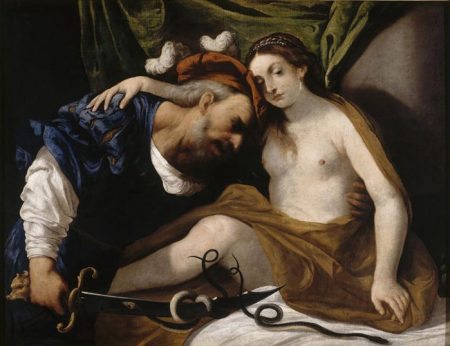 Tiresias was extraordinarily well-qualified to judge women’s advantage in sex. Serving as an man enforcing gynocentric ideology, Tiresias had struck with his staff two huge snakes that were mating in a green forest. Those who police sexual behavior are predominately females. Those who are punished for sex are overwhelming males. As a result of attacking and interrupting the mating, Tiresias was transformed into a woman. That transformation symbolically aligned Tiresias with castration culture.

Seven years later, Tiresias saw the same snakes again. Ovid with starkness of description figured the snakes as now lying listlessly and apathetically in exile from nature.[1] Under gynocentric false consciousness, the female Tiresias calculated that violence against the harmless snakes would enhance her status. She struck the snakes, and Tiresias thus again became a man. As a man, Tiresias had sex with women. As a women, Tiresias has sex with men. Tiresias thus had direct, personal experience to judge that a woman receives more pleasure from sex than does a man.

Tiresias suffered significantly for publicly recognizing women’s sexually privileged position. Juno was the daughter of Saturn, who in turn was the father of castration culture. Not surprisingly, she was deeply hostile to male sexuality. Excessively, unjustly aggrieved that Tiresias had affirmed the generosity of male sexuality, Juno “condemned Tiresias’s eyes to eternal night {aeterna damnavit lumina nocte}.”[2] Jove as merely nominal head god in charge of the cosmos couldn’t reverse Juno’s egregiously unjust punishment of Tiresias. Jove compensated Tiresias by giving him knowledge of the future.[3] As Tiresias knew well and surely could foretell, those who tell the truth about gender subsequently suffer harsh punishment.

Tiresias’s judgment of Juno and Jove’s dispute in Ovid’s Metamorphoses has been ideologically misunderstood. A leading commentary on the Metamorphoses declares that Jove spoke “chauvinistically” in stating that women receive more pleasure from sex. This learned commentary further explains:

Juno denied this crude allegation and no doubt showed that she did not think it funny. … Tiresias became the judge; and he sided with Jupiter {Jove}. That was not very foresighted, and many people, male and female, would question the accuracy of his judgment. … Jupiter, pretending to dominate {sic} his “cares,” is hypocritical, and, presuming to tease Juno about sexual pleasure, is a rat. [4]

Denying women’s sexual advantage serves the dominant gynocentric interest in having men pay women for sex, including through grotesquely unjust “child support” orders. Study of classics can reveal eternal truths about gender and inform desperately needed action for social justice. Yet influential commentary on Ovid’s Metamorphoses, like much classical scholarship, has detracted from, rather than advanced, those noble quests.

A man once asked a woman what is the cause and why it is that, although pleasure in sexual intercourse is shared equally between woman and man, nevertheless men much more readily solicit and pursue women than women do men?

As Jove knew and Tiresias affirmed, pleasure in sexually intercourse isn’t shared equally. Women get more. Men deserve equal compensation for their sexual labor. Instead, men are forced to shoulder a double burden in also having to solicit amorous relationships.

“This practice is highly rational,” she said, “because men should be required to reach out to us. We are always ready and prepared for sex, but you aren’t. Therefore if we were to solicit men when they weren’t ready, we would be frustrated.”

Biology is thus asserted to be destiny. In gynocentric society, social arrangements reflect women’s concerns. The sexual market systematically disadvantages men. Women should think about what they can do in their everyday lives for men who aren’t their boyfriends or husbands. Women should be fighting for sexual opportunities for other men as if their own future and their children’s future depended on it. It probably does.

[1] Tiresias appears to double for Ovid in some characteristics. Balsley (2010), para. 24. Ovid’s exile occurred after he wrote Metamorphoses; nonetheless, Ovid’s treatment of the snakes has a sense of exile that anticipates Ovid’s exile.

Other scholars have engaged in far more fanciful interpretations of Ovid’s account of Juno, Jove, and Tiresias. Liveley strained to deny Tiresias’s transsexual gender identification as a woman:

Tiresias’s male natal origin — the anatomically configured sex with which he was born (genetiua … imago, 3.331) — renders him less than female when he is transformed into a woman … His preliminary attack upon the mating snakes seems unnecessarily aggressive, and is expressly represented in the narrative as a form of violation, an act with both sexual and religious connotations (baculi violauerat ictu, 3.325). As a result of this act (in which, according to other variations of the myth, significantly he attacks and kills only the female snake), Tiresias is made a woman. Tiresias makes a particularly unconvincing transsexual, however. S/he continues to “walk like a man,” to walk alone in the green wood, staff still in hand, still ready to do violence to any copulating snakes. Thus, as both man and woman, Tiresias is represented as a figure prone to unprovoked violence. … The “thrice phallic” connotations of the repeated snake-bashing episode may be seen to attribute to Tiresias a kind of hypermasculinity, an extreme form of masculinity that transcends even his physical transformation into a woman.

Lively (2003) pp. 158-60, with internal reference numbers omitted from this and subsequent quotes from id. There’s no evidence in Ovid’s Metamorphoses that Tiresias, as a trans-woman, walks “alone in the green wood, staff still in hand, still ready to do violence to any copulating snakes.” Moreover, ancient literature documented women’s horrific acts of violence. Women’s violent acts arguably were horrifically greater than those of men. Today, however, dominant gynocentric ideology propagates grotesque, hurtful, misandristic myths about interpersonal violence.

[2] Ovid explicitly indicated the injustice of Juno’s violence against Tiresias:

… the daughter of Saturn {Juno} was more heavily
aggrieved than is just, it is said

In the debate between the gods, then, Jupiter appeals to a “man-made-woman” {a trans-woman} to support his claim about men, women, and sex, while Juno apparently is invited to speak her knowledge of pleasure, not only as a woman, but as a representative of all other women, of Woman. Her voice, however, is effectively silenced (illa negat, 3.322); the form of her denial is unrepresented. Quite simply, we do not know what she is saying. A claim about her is made for her by (a) man; her response is suppressed and disbelieved. An appeal to a male arbiter is made, the evidence offered by a “man-made-woman” considered conclusive. Juno’s words, her knowledge about her own experience, are dismissed. Considered from this perspective — even if Jupiter is joking — we may see why Juno is aggrieved. … Tiresias can see and know the future, but he can do nothing to influence it, and his words of prophecy are uselessly ambiguous. He may see the future, but when he speaks about what he knows, when he attempts to represent his knowledge, we do not know what he is saying. Juno’s punishment seems apt indeed. {sic}

Women being silenced was a tendentious banality even back in 2003. Nonetheless, Liveley deployed that banality again to explain the significance of Venus in Ovid’s account of Tiresias’s judgment:

The juxtaposition of the first reference to Tiresias by name with the identification of the sexual act with Venus herself reminds us that her arbitration, her “testimony,” might have been called upon but is not. The voice of another female figure is silenced, and a male figure is invited to speak in her place.

According to Eustathius, Sostratus’s now-lost elegy on Tiresias stated that Tiresias was born female. O’Hara (1996) pp. 176-77. Sostratus may have been the first-century BGC grammarian Sostratus of Nysa. Id. pp. 204-12. In any case, the assertion that Sostratus was born female circulated in the ancient world. Belief that Tiresias could not have been fully a woman as a trans-woman appears to be merely a modern prejudice.

[3] The story of Tiresias’s judgment of Juno and Jove’s dispute is from Ovid, Metamorphoses 3.318-38. Liveley (2003) pp. 148-9 provides the Latin text and a relatively close English translation. A. S. Kline has made available online a good English translation. Here’s an online Latin text. On Tiresias in Greco-Roman literature more generally, Michalopoulos (2012). T. S. Eliot quoted the whole passage in his notes to The Wasteland.

[4] Anderson (1998) pp. 368-9. Jove’s claim wasn’t crude. Tiresias in his judgment apparently made a specific finding. The twelfth-century Byzantine scholar and bishop Eustathius, probably drawing upon a work of Ptolemy Chennus from about 100 GC, stated of Tiresias’s decision:

His decision (in the original verse) was that “if there were ten shares of pleasure, the portion of delight the woman would feel would be nine.”

Anderson declared that Jove “who lives on carefree Olympus, has no genuine anxieties.” Anderson (1998) p. 369. That unwarranted assertion devalues the work of gods and men. Like other gods and men, Jove feared his wife Juno and strove to serve women.

[5] Poggio, Facetiae 47, “A Woman’s Courtly Response {Responsio mulieris faceta},” Latin text from Poggio (1879) vol. 1, p. 82, my English translation with help from that of id. Here’s the Latin text in machine-readable form. The subsequent quote above is similarly sourced. Poggio, an eminent medieval church official, concluded the story by characterizing the woman’s response within dominant gynocentric culture: “a wise and courtly response {Scita facetaque responsio}.” Rape-culture culture had tended to suppress the truth about the sexual division of labor and reward.

[image] Tiresias transformed into a woman. Oil on canvas painting by Pietro della Vecchia, made between 1626 and 1678. Held in Nantes Museum of Arts. Via Wikimedia Commons.