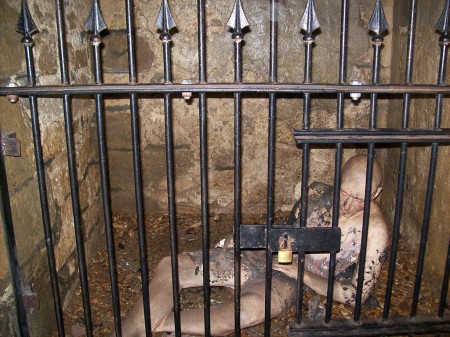 The vastly gender-disproportionate imprisonment of men is one of the cruelest gender injustices in the world today. That injustice attracts much less public concern than gender ratios among Chief Executive Officers and other elites. Almost everyone apparently believes in trickle-down gender justice. But don’t be deceived by today’s public insanity. The medieval nobleman and knight Sir Geoffrey de La Tour Landry instructed through his own example that men should refuse to become intimately involved with women who joke about imprisoning men.

In fourteenth-century France, the young, wealthy and well-connected Sir Geoffrey was considering marriage to a noblewoman. Geoffrey’s father took him to see the woman. Geoffrey explained how he tested her:

I looked at her and talked with her about many things in order to know her behavior better, and we started speaking about prisoners. I said to her, “Damsel, I would rather be your prisoner than anyone else’s, and I think that your prison wouldn’t be as hard or as cruel as the prison of the Englishmen.”

She answered me, saying that recently she had seen someone whom she wished were her prisoner. I asked her if she would give him an evil prison, and she said no, but that she would keep him as lovingly as she kept her own body. [1]

She modestly referred to imprisoning a man in the third person. Geoffrey knew that she meant him. He played along with a cheerful affirmation of men’s deplorable social position:

“He would be lucky to have such a pleasant and admirable prison,” I said.

Geoffrey latter explained to his daughters:

I tell you, she loved that prisoner, and her eye was lively, and she was full of words. When we had to leave, she was pert, asking me two or three times not to leave but to come see her.

Geoffrey said nothing and left with his father. When his father asked him for his thoughts regarding the woman, Geoffrey stated that her “pertness and frivolous manner” was discouraging. What sort of woman would joke about having a man imprisoned? Women who joke about having a man imprisoned, or who make false accusations that threaten men with imprisonment, have bad character. Exercising good judgment, Geoffrey didn’t marry the woman.[2]

[1] Geoffrey de La Tour Landry, Livre pour l’enseignement de ses filles du Chevalier de La Tour (Book of the Knight of Tour Landry / Book of the Knight of the Tower) Ch. 12 (How the daughters of the King of Denmark lost their husbands because of their manners), from Old French trans. Barnhouse (2006) p. 81. Subsequent quotes are from id. The account of these events reported through Geoffrey’s wife obscures the issue of imprisonment. See Ch. 25  (How the knight answers to his wife), trans. id pp. 161-2.

As the first-person narrator, Geoffrey shows little literary artifice in his book for his daughters. Geoffrey’s reports of his experience are probably from his actual life.

I have thanked God many times {that I didn’t marry her}, for not a year and a half later she was blamed for something, rightly or wrongly, I don’t know. Soon afterwords, she died.

I have since heard it said of her that she was dishonored, but I don’t know for certain if it was so.

Id. p. 163. Geoffrey’s wife urged their daughters not to be sexually forward, but rather to behave “simply and purely.” Id.

[image] Display of man imprisoned in medieval dungeon at Arundel Castle, England. Thanks to Ludi Ling and Wikimedia Commons.

Wright, Thomas. 1868. Geoffroy de La Tour Landry. The book of the Knight of La Tour-Landry, compiled for the instruction of his daughters. London: Pub. for the Early English Text Society, by N. Trübner & Co.