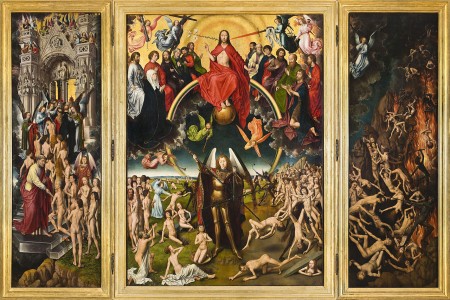 In France about 1372, the knight Geoffrey de la Tour Landry wrote a book to instruct his young daughters “how to govern themselves, and to keep themselves from evil.” To get material for his book, Geoffrey had two priests and two clerics read to him “the Bible, stories of kings, chronicles of France and England, and many other strange histories.”[1] Those readings probably included a popular, realistic story of a hermit’s vision of judgment and punishment.

The context of the hermit’s vision is a knight and his deceased wife. The knight loved his wife greatly. They were married only a short time before she died. The knight sought comfort from his uncle, a hermit. The knight wanted to know whether his wife was damned or saved. His uncle the hermit went into his chapel, prayed for a long time, and fell asleep. Then the hermit had a vision:

he saw the wife’s soul before Saint Michael the Archangel, with the Fiend on the other side. She was standing in a balance, her good deeds beside her. On the other side of the scale was the devil with all her evil deeds — like her gowns made of very fine cloth and furred with Calabrian fur, grey squirrel fur, and ermine.

The devil cried out in a high voice, “Sir, this woman had ten pair of gowns, long and short, and you know well half of them would have been enough, that is a long gown, two skirts and two short gowns. She might have been satisfied with those. The value of one of her gowns was too much by half compared to poor people’s coarse woolen clothes. They suffer such cold and hardship, yet she never took pity on them.”

Then the devil took the gowns and rings and jewels that men had given her for love, and also the vain and evil words she had said about others because of envy, and taken away their good reputations. Leaving behind no sin that she had done, he put them together in the balance and weighed them compared to her good deeds. The weighed much more than all the good she had ever done.

Thus the devil took her and forced her to put on her gowns that were now burning like fire, and he took her to Hell, the poor soul crying piteously. [2]

The idea of a post-death weighing of a person’s merits goes back at least to the ancient Egyptian Book of the Dead. From as early as the second century, Christians envisioned Saint Michael the Archangel as the master of the scales that weighed persons’ merits in judgment after death.[3] Post-death punishment reversing the effects of bad behavior is another ancient idea. In this vision, the women who enjoyed luxurious gowns wears those gowns burning like fire after her death.[4] The hermit’s vision presents these ancient punishment figures with contemporary, realistic detail: ten gowns of specific types and “furred with Calabrian fur, grey squirrel fur, and ermine,” compared to others’ “coarse woolen clothes.”  The hermit’s vision isn’t a literary work. It has, however, a striking combination of other-worldly vision and contemporary realism.[5]

A literary masterpiece of other-worldly vision and contemporary realism is Dante’s Commedia. Dante wrote his Commedia about a half-century before Geoffrey de la Tour Landry wrote his book of instruction for his daughters. Geoffrey, a soldier, almost surely hadn’t read Dante’s Commedia. Geoffrey may not even have been able to read and write. He may have “written” his book in the sense of giving oral directions to a cleric inscribing words. Perhaps the peculiar literary feature of other-worldly vision and contemporary realism arose through an authorial collaboration between a man of the contemporary world and a man of learned books. Dante can be understood as having combined both men within himself.

The privilege of elite women relative to ordinary men is obvious reality. Yet discussion of it tends to be suppressed in gynocentric society.

[3] In the apocrypal Testament of Abraham (probably written by Jewish Christians in Egypt in the second century), Saint Michael the Archangel supervises weighing the merits of souls in post-death judgment. Johnson (2005) p. 88. Dikê, the ancient Greek goddess of justice, was associated with holding a balance, e.g. in Bacchylides, Fragment 5 and Aeschylus, Libation Bearers 55 ff. For these and other relevant texts in English translations, see Dikê on the Theoi site.

One time the wife chided this woman and reviled her concerning her husband. The second damsel said, “By my faith, what you say isn’t true.”

“You lie,” the first damsel replied, and thus they began to fight and to hit each other fiercely. And she who was accused took a staff and smote the other on the nose with such a stroke that she broke the bone.

Trans. Barnhouse (2006) p. 125. This story occurs as Ch. 15 in Caxton’s translation. Today, discussion of women’s violence, particularly women’s domestic violence, is often sternly repressed. In today’s orthodoxy, women are strong, independent, and equal to men, except that women are much less violent and evil than men.

[image] Last Judgement. In the lower part of the center panel, Saint Michael the Archangel balances souls in judgment. Triptych, oil on wood, 1466–1473. By Hans Memling. Held in National Museum, Gdańsk. Thanks to Wikimedia Commons. For a painting more focused on Saint Michael and his balance of justice, see the Last Judgment of Rogier van der Weyden, c. 1446-52.