Between God and the writer of a book, and between Geoffrey Chaucer and Adam Scrivener, are a wide range of understandings of authority and writing.  Chaucer is generally regarded as the greatest English poet of the European Middle Ages.  He wrote a long poem reformulating a well-known story about ancient Greece.  Chaucer appended to his poem an assertive prayer:

The Bible was widely copied and read in Chaucer’s time.  A high priest, concerned for the communication of God’s word in the worldly babel of religious tongues from Spain to Ethiopia to China, might magnanimously pray: “pray I God that none miswrite you … that you be understood, God I beseech!”  Yet the “you” in Chaucer’s text most literally refers to Chaucer’s own work.  That reference is clear in the lines preceding those above:

Chaucer the maker sends out his “little book” onto the portico from which the literary gods Virgil, Ovid, Homer, Lucian, and Statius perform.  Chaucer’s prayer to God pushes together the Bible and Chaucer’s own work.  Chaucer seems to imagine great authors, including himself, to be godlike. 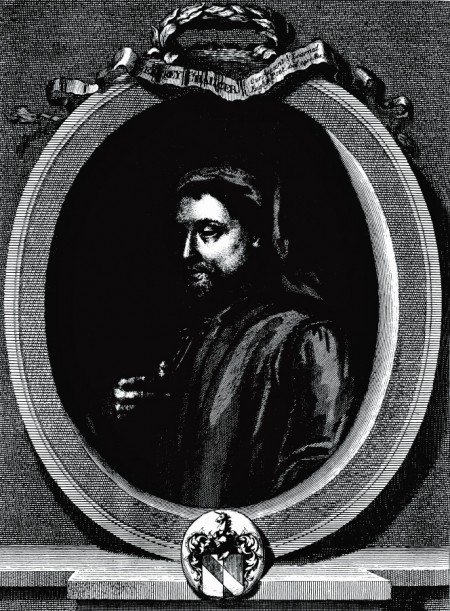 Problems for God and the godlike author appear lower in the communicative division of labor.  A poem concerning Adam Scrivener (Adam the scribe) exists in one surviving medieval manuscript:

This poem is headed “Geoffrey Chaucer’s words to Adam his own scrivener.”  Recent scholarship has identified Adam Pinkhurst as the scribe of the earliest and most authoritative manuscripts of Chaucer’s Canterbury Tales.[4]  Adam Pinkhurst is then identified with Adam Scrivener in the above poem.  Adam in the above poem also plausibly alludes to Adam, the first human in Genesis.[5]  Irrespective of whether Adam Scrivener refers to Adam Pinkhurst, Adam the first human, or both, Adam Scrivener intermediates and corrupts the author’s communication.  In the worldly reality of communication, both God and godlike authors are intermediated and potentially corrupted.

rubbing and scraping are specialist activities that would normally be undertaken by a scribe to a finished manuscript, that is one that has been completed in fair copy by (generally) a trained copyist, as Adam seems, at least notionally, to have been.  At earlier stages in the compositional process such careful efforts at correction would lack necessity since less labour-intensive means of signalling correction would be appropriate: deletion, interlineation, or marginal corrections.  Why would Chaucer, at the latest stage in production, be involved in the actual preparation of the final manuscript, doing tasks that fall within the purview of the skilled artisan? [6]

Other evidence also suggests that Chaucer did not author the poem concerning Adam Scrivener.  A hypothetical alternative author is a line manager in the scribal business:

a person with overall responsibility for overseeing the writing of a manuscript or manuscripts of Chaucer’s works might venture a complaint about the competence of a scribe under his supervision and the tiresome number of corrections that such supervision might entail. [7]

The poem concerning Adam Scrivener is literary: it uses figurative language that supports wonder, mobile meaning, and scholarly explication.  If a line manager in the scribal business authored the poem concerning Adam Scrivener, godlike authors are not just on the steps of the ancient, honored portico.  They are in kitchens, bureaucracies, and all across the Internet.

[1] Chaucer, Troilus and Criseyde, 5.1793-98.  All quotes from Chaucer are my close translation into modern English.

[3] Boece and Troilus are works of Chaucer.  The poem appears in Trinity College Cambridge MS R. 3.20, p. 367. The manuscript is in the hand of John Shirley (c. 1366- c. 1456).  Edwards (2012) gives a verbatim transcription.  The poem is headed “Chanciers wordes a Geffrey vn to Adame his owen scyveyne” (Geoffrey Chaucer’s words to Adam his own scrivener).  Outside the poem, I refer to “Adam scryveyne” as “Adam Scrivener,” where I capitalize “scrivener” to form a name like “Adam Taylor.”

[5] Mize (2001) explores in detail such an interpretation.  The poem is also similar to book curses.  Olson (2008) pursues that generic issue.

[7] Id.  As id. describes, other evidence for non-Chaucerian authorship are lexical (five words in the poem about Adam Scrivener appear nowhere else in the Chaucer canon), that Shirley made other mis-attributions to Chaucer, and that the poem is the only single rhyme royal stanza in the Chaucer canon.

Urry, John, ed. 1721. The works of Geoffrey Chaucer compared with the former editions, and many valuable MSS...  London: Printed for Bernard Lintot.