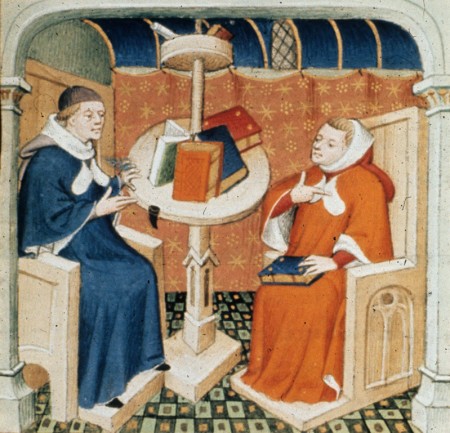 In fourteenth-century Florence, Boccaccio worked in the shadow of his great predecessor Dante. Boccaccio figured Dante as an excellent father who called Boccaccio “my son.”  Boccaccio also worked amid great regard for the European-wide celebrity Petrarch.  Petrarch, a classical humanist writing Latin poetry, was crowned a new poet laureate of Rome (the first since the fall of the Roman Empire) in a ceremony at the Roman Capitol in 1341.  Boccaccio referred to Petrarch as “my excellent and reverend teacher.”[1]  Despite his high regard for Dante and Petrarch, Boccaccio with subtle irony used Theophrastus’ Golden Book on Marriage to criticize both.

Boccaccio ironically praised Dante for achieving literary greatness despite being married.  As imagined in his Vita Nuova, Dante at age nine fell madly in love with Beatrice.  He may not have seen her again for another nine years.  In any case, Dante’s parents arranged a marriage for him at age twelve to Gemma Donati.  Dante and Gemma had four or five children.  Beatrice died young.  Dante never mentioned his wife Gemma in his writings.  Beatrice, in contrast, was a major presence in Dante’s work, particularly his Commedia.  From a literary perspective, Dante might as well have been unmarried.

Boccaccio deployed Theophrastus’ Golden Book on Marriage in playful appreciation for Dante’s achievement.  Writing in praise of Dante in a literary construction of his life, Boccaccio declared:

Academic endeavors (and especially those of philosophy, to which our Dante, as has been shown, devoted himself), usually require solitude, freedom from anxiety, and tranquility of mind.  Instead of this serene retirement and quiet which Dante almost from the beginning of his life and up to the day of his death searched for, he had to endure an uncontrollable passion of love, a wife, familial and civic responsibilities, exile, and poverty, not to mention other special troubles which naturally arise out of these.  I will explain all of them one by one, so that their burden may become more evident. [2]

it is enough to discuss one matter that pertains to almost all women: they believe that doing a good job always keeps the lowliest servant in the household, while doing the opposite leads to dismissal.  As a result, they feel that if they themselves do their work well, they are simple acting like menials; they can remain great ladies only when they do their jobs poorly, but avoid the fate of the dismissed servant.

Boccaccio then winked at the reader:

But why should I want to keep on proving in detail what most of us already know?  I believe it is better to hold my tongue than to offend our lovely ladies by my talk. [4]

Many men are deathly afraid of offending women.  Boccaccio wasn’t.  He went on to cite another point from Theophrastus’ Golden Book.  Boccaccio concluded with a classical invocation of the highest love:

Let no one believe that I am suggesting, from what I have stated, that men should not take wives.  In fact, I recommend this highly, but I must say that it is not for everyone.  Permit philosophers to leave marriage to wealthy fools, to noblemen and peasants, and let them take their delight with Lady Philosophy, who is a far better bride than any other. [5]

The list “wealthy fools, noblemen, and peasants” light-heartedly casts a net over the major classes of medieval society.  Philosophers, in contrast, remain apart from wealth, the world, and flesh-and-blood women.  Boccaccio in the outrageous comic realism of his Corbaccio mocked the courtly love fantasy of Dante’s Vita Nuova.  Boccaccio found inspiration in flesh-and-blood ladies, not the Muses on Mount Parnassus.  Boccaccio admired and valued Dante’s civic engagement.[6]  Boccaccio idealized the solitary, disengaged philosopher only to praise Dante’s achievement in real life.  That real life was not with Beatrice, but with his flesh-and-blood wife Gemma.

In emphasizing the burden of having a wife, Boccaccio elevated Dante relative to Petrarch.  Petrarch did not marry, stood apart from contemporary civic concerns, and took delight in Lady Philosophy and a Laura no more real that Beatrice.  Boccaccio wrote:

What will those say now whose houses are not sufficient for their studies and who thus seek solitude in the forests?  Or, those who have complete repose, and whose ample facilities without any anxiety are supported by every opportunity?  Or those who, free from wife and children, have as much leisure as they desire?  Many of those are such that, if they were not sitting in comfort, or if they were to hear a murmur, they would not be able to read or write, let alone reflect, if their elbows were not at rest. [7]

Scholars have suggested that, “whether deliberate or unintentional,” Boccaccio is describing Petrarch.[8]  Boccaccio was from the merchant class in which persons kept their elbows moving and sharp.  Men from that class also had wives and were aware of women’s guile.  Boccaccio followed Petrarch in recovering classical learning and creating new humanist literature in Latin.  At the same time, Boccaccio was critical of Petrarch’s disengagement from everyday life.

Boccaccio further used Theophrastus’ Golden Book on Marriage to assert his own sense of humanism against Dante’s theological ascent and Petrarch’s classical models.  In Canto XVI of Dante’s Inferno, Jacopo Rusticucci, suffering in Hell, complained, “it is my fierce wife who pains me most of all.”[9]  Boccaccio provided a conventional literal exposition of that line: Rusticucci’s shrewish wife drove him to seek satisfaction in sodomy to his eternal perdition.  Then Boccaccio provided a round-about introduction to Theophrastus’ Golden Book:

St. Jerome writes in one of his books called Against Jovinianus the Heretic that Theophrastus, who was a venerable philosopher and student of Aristotle, composed a book that is called De nuptiis {On marriage}.  In a part of that work, he questions whether a wise man should take a wife. [10]

Boccaccio then copied into his work the text of De nuptiis (Theophrastus’ Golden Book on Marriage), which he silently translated from Latin into Italian.  The only significant change Boccaccio made to De nuptiis was to excise these two outrageous sentences about the wife:

You have to show deference to her nurse and her maid, the servant from her father’s house, and her foster-child, and her handsome attendant and her curly-haired “assistant,” and her eunuch, gelded to prolong her pleasure and to make it safe: behind these titles there is an adulterer hiding.  Upon whomever she sets her heart, they must have her love though they want her not. [11]

Boccaccio wasn’t afraid to write about women’s sexual eagerness and women’s guile.  The problem with the above text for a learned, free-writing person is that eunuchs did not exist in Theophrastus’ Athens.  The eunuch reference signals to the learned that Theophrastus’ De nuptiis is a post hoc literary artifice.[12]  Boccaccio seems to have been in on Jerome’s ruse.  Boccaccio concluded his account of De nuptiis and its relevance to Dante’s account of Jacopo Rusticucci with artful, more general moralizing:

Let those who prepare to take a wife, then, be alert and let them keep an eye on others, for all too rarely does it happen that a man gets a Lucretia, a Penelope, or someone of like ilk.  As I have heard many men say, although they seem like angels in the daylight, they are devils in your bed at night. [13]

[2] Giovanni Boccaccio, Trattatello in laude di Dante (Little Treatise in Praise of Dante, also know as Life of Dante), s. 3, from Italian trans. Bollettino (1990) p. 10, adapted slightly.  The text has survived in three version, which apparently do not differ in this passage.  In a letter on Dante to Boccaccio (Familiares 21.15), Petrarch declared:

my father, compelled by other matters and by concern for his family, resigned himself to exile, while his friend {Dante} resisted and began devoting himself all the more vigorously to his literary pursuits, neglecting all else and desirous only of glory.  In this I can scarcely admire and praise him too highly when nothing — not the injustice suffered at the hands of his fellow citizens, not exile, poverty, or the stings of envy, not his wife’s love or his devotion to his children — diverted him from his course once he had embarked upon it, when many other great talents, being weak of purpose, would be distracted by the least disturbance.

indeed, more than any other person, he must show that he loves her father — and any other relative or person whom she holds dear.

[12] Scholars who have discussed the reference to eunuchs have rationalized it as later interpolation.  The truth seems to be simpler: Jerome brilliantly created Theophrastus’ Golden Book on Marriage.

committed when a man and a woman (even a husband and a wife) come together in a fashion that is less than moral or against the rule of Nature or, indeed, against canon law.

Trans. id. p. 568.  That’s the literal level of understanding “my little devil.”  It’s inner meaning in life can be recognized in the sly gusto of Decameron 9.10 and innuendo Boccaccio made in the conclusion to the Decameron.  See note [4] in post on masculine love.  While devilish behavior has its attractions, medieval men also considered heterosexual intercourse preoccupied with intercourse of non-reproductive type to be oppressive, demoralizing, and wrong.

[15] Men’s fantasies about their wives and lovers are not equivalent to men admiring sluts or desiring a long-term relationship with such women.  In Famous Women (De mulieribus claris), Boccaccio described the life of Leontium, a famous Greek female literary scholar:

prompted either by envy or feminine temerity, she dared to write an invective against Theophrastus, a famous philosopher of that period {late-fourth-century BGC Macedonian, about the time of Alexander the Great}.

What disgraceful behavior!  Living in the brothels among pimps, vile adulterers, and whores, she was able to stain Philosophy, the teacher of truth, with ignominy in those disgraceful chambers, trample it with wanton feet, and plunge it into filthy sewers — if indeed the splendor of Philosophy can be dimmed by the infamous action of an unchaste heart.  We must certainly bewail the fact that so brilliant a talent, bestowed as a sacred gift from heaven, could be subject to so filthy a way of life.

Boccaccio, Famous Women (De mulieribus claris), Ch. LX, from Latin trans. Brown (2001) pp. 251-2.  Boccaccio may have invented this whole biography to provide an opportunity for him to defend Theophrastus and philosophy.  Boccaccio’s criticism of Dante and Petrarch shouldn’t be interpreted to imply contempt for philosophy and endorsement of licentiousness.