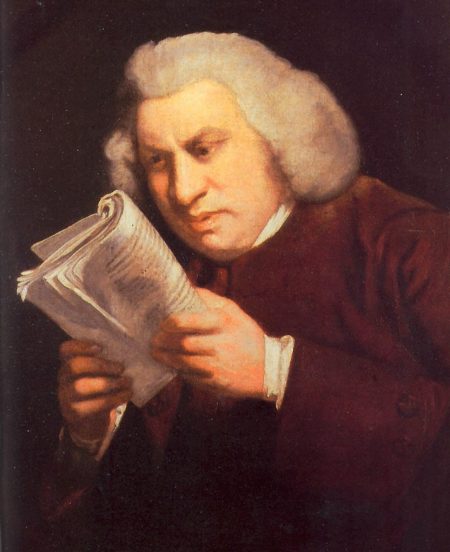 Samuel Johnson’s Dictionary of the English Language, published in 1755, was widely respected and enormously influential. In his Dictionary, Johnson defined woman and man with deeply rooted anti-men gender bias. In his life, Johnson delighted in a woman referring to him as “my slave.” She would, at his imploring, bind him in handcuffs and whip him while he kissed her feet.

Johnson defined woman simply. His first definition of woman is “the female of the human race.” That definition elevates immature females to the status of women. To Johnson, women’s social status apparently was a simple fact of female biology. Johnson included one additional definition of woman: “a female attendant on a person of rank.” That definition recognizes significant differences in status among persons. Johnson’s illustrative quotation presented an adult female human attending another, highly privileged adult female human.

Johnson presented women as superior to men. To illustrate his first definition of woman, Johnson quoted the first two lines from a man’s declaration to a woman:

Oh, woman! lovely woman! Nature made thee
To temper man: we had been brutes without you!
Angels are painted fair to look like you:
There’s in you all that we believe of heaven;
Amazing brightness, purity, and truth,
Eternal joy, and everlasting love! [1]

The claim that men would be brutes without women is associated with the mendacious ideology of “ennobling love.” Idealization of women (women are angels) is at the core of the medieval, man-degrading social construction of courtly love. Another quote came from the context of a man advising another man to flatter a woman and describe her as an angel in order to win her love:

That man that hath a tongue, I say is no man,
If with his tongue he cannot win a woman. [2]

A man’s masculine existence is thus predicated on his hetero-normative capacity to win a woman’s love. A further quote naturalized effects of women’s and men’s different gender positions:

Women in their nature are much more gay and joyous than men; whether it be that their blood is more refined, their fibres more delicate, and their animal spirits more light; vivacity is the gift of women, gravity that of men. [3]

Given men’s highly disadvantaged sexual position, one would expect men to be less joyous than women. Johnson’s quote ignores that social reality, as many persons do to this day. Johnson presented women as naturally superior to men in enjoying their lives.

Johnson’s quotations for woman illustrate men’s common misunderstandings about gender. A woman deserted her husband and then helped to get his son killed. She then tauntingly presented him with a napkin dipped in his dead child’s blood. The man, stunned with such evil, couldn’t conceive that it came from a woman. Johnson quoted the man’s protest to her:

She then helped to stab him to death. Without true understanding, men’s sexed protests are impotent.

In another of Johnson’s quotations, a man cannot comprehend a wife dominating her husband. The general circumstances are mundane: a wife rejected her husband’s request. In the specific context of the quotation, a nobleman asked his wife not to address the King. She nonetheless did. The King, shocked at a woman’s strong, independent action, asked for an explanation. The wife spoke first. She declared that in certain matters, “he shall not rule me.” The husband then modestly explained, “when she will take the rein I let her run.” The King ordered the nobleman to order his wife to leave. The wife responded that she would scratch out the eyes of any man who tried to force her to leave. The King was deluded with gender ideology much like that reigning today. Johnson quoted the King’s uncomprehendingly exclamation to the nobleman:

Thou dotard, thou art woman-tir’d, unroosted
By thy dame Parlet here. [5]

Invoking the figure of a hen-pecked rooster, the phrase “woman-tir’d, unroosted” refers to a husband’s subordination to his wife. Parlet, a condensed form for Pertelote, refers to a literary hen who dominated her rooster. Despite obvious evidence, even today many persons cannot comprehend women’s dominance.

Johnson’s Dictionary illustrates a negative view of man. Johnson’s second definition of man defines man as “not a woman.” His third definition declares that man is “not a boy.” Challenging prevalent social disparagement of men, the tenth of Johnson’s fourteen definitions of man establishes that man is “not a beast.” Medieval Latin literature described the creation of a masculine human being, fully equipped with a functioning penis, as a vital and wonderful aspect of the creation of the cosmos. Johnson’s Age of Enlightenment featured an impoverished understanding of man.

Johnson’s Dictionary defines man most substantively in terms of men’s subordinate gender position. Connecting to Johnson’s definition of woman as a being superior to man, Johnson’s fourth definition of man recognized that man is “a servant; an attendant; a dependant.” That’s particular true within the psychological dynamics of the family. Johnson’s fifth definition of man recognized man as “a word of familiarity bordering on contempt.” With intensified gynocentrism today, contempt for men has significantly increased.

As seems to be the case for many men today, particularly academics, Johnson took pleasure in having a woman dominate him. In 1768, the fifty-nine-year-old Johnson committed his personal padlock to the care of the twenty-seven-year-old Hester Thrale. Three years later, Johnson recorded in his diary “De pedicis et manicis insana cogitatio {mad thoughts of fetters and handcuffs}.”[6] Johnson, who surely knew the meaning of the words thrall and enthrall, told Thrale when she was thirty-eight:

a Woman has such power between the Ages of twenty five and forty five, that She may tye {tie} a Man to a post and whip him if She will. [7]

Thrale added to that text a comment, “this he knew of him self was literally and strictly true I am sure {emphasis in original}.” Thrale referred to Johnson as her slave. Johnson enthusiastically supported his own enslavement. He wrote to Thale:

It’s essential to remember our agreement. I wish, my protector, that your authority will always be dear to me, and that you will keep me in that form of slavery which you know so well how to make blissful. [8]

Thrale admonished Johnson, “do not quarrel with your Governess for not using the Rod enough.” She also marveled:

how many Times has this great, this formidable Doctor Johnson kissed my hand, ay & my foot too upon his knees! Strange Connections there are in this odd World! [9]

Elite intellectual behavior in perpetuating gynocentrism is nearly too bizarre to believe.

A new, better Age of Enlightenment will begin when women and men appreciate men’s distinctively masculine being. Men must gain enlightened understanding of women as fully human beings. Moreover, reasonable men and women must assertively and uncompromisingly reject men’s subordination and slavery to women.

[1] These lines are from Thomas Otway’s play Venice Preserv’d, Act 1, Scene 1. Venice Preserv’d was first staged in London in 1682. Johnson apparently made some minor changes to the quote.

[3] Joseph Addison, issue no. 128 of The Spectator (London), dated Friday, July 27, 1711. Johnson’s quote begins from the beginning of the article, but makes a minor abbreviation. The relevant, original text:

WOMEN in their Nature are much more gay and joyous than Men; whether it be that their Blood is more refined, their Fibres more delicate, and their animal Spirits more light and volatile; or whether, as some have imagined, there may not be a kind of Sex in the very Soul, I shall not pretend to determine. As Vivacity is the Gift of Women, Gravity is that of Men.

[4] Shakespeare, King Henry the VI, Part 3, 1.4.141-2. Little evidence is available on when Shakespeare wrote this play.

In gynocentric society, wrongs women do aren’t their fault. In defining woman, Johnson also quotes from Samuel Garth’s epilogue to Joseph Addison’s Tragedy of Cato (1712). That epilogue declares in a woman’s voice:

Blame not our conduct, since we but pursue
Those lively lessons we have learn’d from you

[5] Shakespeare, The Winter’s Tale, 2.3.74-5. Shakespeare probably wrote The Winter Tale’s shortly before 1611. The other quotes in the paragraph above are also from id. Act 2, Scene 3.

Johnson included under his first definition of woman a biblical quotation: “And Abimelech took men-servants and women servants.” That’s from Genesis 20:14. In the relevant story, Abraham described his wife Sarah as his sister, which she was in the ancient meaning of sister. He described his wife as sister so that foreigners would seek his favor, rather than seek to attack him and take his wife. Abraham, like men in gynocentric society generally, was especially vulnerable as a husband.

Johnson also included under his first definition of woman a quote about Caeneus. That quote is from John Dryden’s translation (complete in 1697) of Virgil’s Aeneid, 6.448. Caeneus, born a woman, became a man, killed a man, and suffered a violent death as a man. In the Mourning Fields of the Underworld, Caeneus became a woman mourning her life as a man:

Ceneus {Caeneus}, a woman once, and once a man,
But ending in the sex she first began.

Caeneus ultimately became a woman who understood the horror of the violence that men suffer.

our stern Philosopher Johnson trusted me about the Years 1767 or 1768—I know not which just now—with a Secret far dearer to him than his Life:

Id. p. 384. Referring to her connection to Johnson, Thrale commented, “a dreadful & little suspected Reason for ours God knows—but the Fetters & Padlocks will tell Posterity the Truth.” Id p. 415 n. 4.

I thought they must begin earlier & leave off sooner, but he says that ’tis not Girls but Women who inspire the violent & lasting passions—Cleopatra was Forty three Years old when Anthony lost the World for her.

Id. Thrale’s view is probably more reasonable. Johnson may have been flattering Thrale, a thirty-eight-year-old woman.