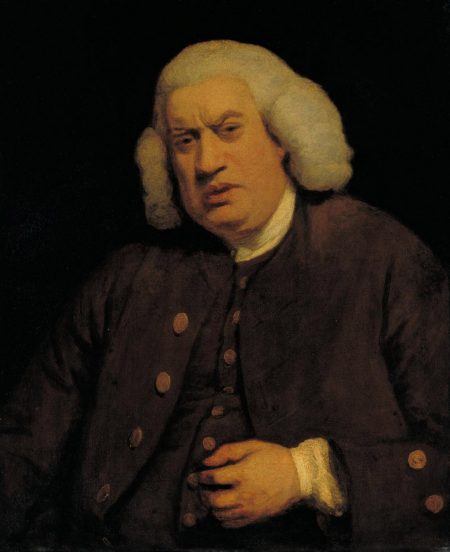 As published in 1791, Boswell’s The Life of Johnson included some discussion between Boswell and Johnson on marital fidelity. Boswell questioned Johnson’s views, which apparently were controversial for that time:

I {Boswell} mentioned to him {Johnson} a dispute between a friend of mine and his lady, concerning conjugal infidelity, which my friend had maintained was by no means so bad in the husband, as in the wife. Johnson. “Your friend was in the right, Sir. Between a man and his Maker it is a different question: but between a man and his wife, a husband’s infidelity is nothing. They are connected by children, by fortune, by serious considerations of community. Wise married women don’t trouble themselves about infidelity in their husbands.” Boswell. “To be sure there is a great difference between the offence of infidelity in a man and that of his wife.” Johnson. “The difference is boundless. The man imposes no bastards upon his wife.” [1]

Under the four-seas doctrine of English common law, a husband was require to support any children his wife had, even if she had children through extramarital sex. The wife had no such legal obligation to support children that her husband had through extra-marital sex. That legal double standard has largely been ignored, as has been undue influence, misrepresentation, and mis-service in present-day paternity establishment procedures. Johnson deserves credit for bringing into reasoned deliberation the legal double standard for spousal responsibility.

Here it may be questioned whether Johnson was entirely in the right. I suppose it will not be controverted that the difference in the degree of criminality {associated with a husband’s adultery versus a wife’s adultery} is very great, on account of consequences: but still it may be maintained, that, independent of moral obligation, infidelity is by no means a light offence in a husband; because it must hurt a delicate attachment, in which a mutual constancy is implied, with such refined sentiments as Massinger has exhibited in his play of “The Picture.” — Johnson probably at another time would have admitted this opinion. And let it be kept in remembrance, that he was very careful not to give any encouragement to irregular conduct. A gentleman, not adverting to the distinction made by him upon this subject, supposed a case of singular perverseness in a wife, and heedlessly said, “That then he thought a husband might do as he pleased with a safe conscience.” Johnson. “Nay, Sir, this is wild indeed (smiling;) you must consider that fornication is a crime in a single man; and you cannot have more liberty by being married.”

Boswell canceled from an early printing of his Life of Johnson opinions of Johnson that even more vigorously transgressed dominant ideology.  The canceled text:

{Johnson} “they {wives} detest a mistress, but don’t mind a whore. My wife told me I might lye with as many women as I pleased, provided I loved her alone.” Boswell. “She was not in earnest.” Johnson. “But she was; ….” … Boswell. “Suppose, Sir, a woman to be of a very cold constitution, has she any right to complain of her husband’s infidelity?” Johnson. “Sir, if she refuses, she has no right to complain.” Boswell. “Then, Sir, according to your doctrine, upon every such occasion a man may make a note in his pocket-book, and do as he pleases.” [2]

Johnson seems to have adhered to an accounting version of the ancient Christian doctrine of marital debt. According to that doctrine, wife and husband owed each other sex and were required to make good on that obligation even if one didn’t feel like it.[3] Today, elite opinion scores such sexual behavior as husbands raping their wives. That indicates the collapse of Enlightenment and the rise of virulent anti-men gender bigotry and the carceral state.

Academics in recent decades have debated whether Johnson was a “misogynist.” The most thorough scholarly examination of this question first considers Johnson’s reported remark to a famous theatre manager. Johnson declared that he would not further attend theatre-insider parties, “For the white bubbies & silk stockings of your Actresses excite my Genitals.”[4] Suppression of men’s natural sexuality characterizes castration culture. The relation of castration culture to claims of misogyny becomes clear in the introduction to the subsequent section of the scholarly article:

The second criticism of Boswell is that he misattributes misogynist sentiments to Johnson. Certainly, the Life includes remarks attribute to Johnson that are derogatory of women. The question is whether this aspect of Boswell’s portrait is a distortion. [5]

Did Johnson ever actually say anything mean to a woman or about women? If he did, then he’s a misogynist, according to the dominant understanding of misogyny. Another scholar described representations of Johnson as “the totem of everything anti-feminist in eighteenth-century literature.”[6] Such representations are associated with the mythic monster of patriarchy:

everyone knows that patriarchy has always loved a virgin, for reasons that appear to be transparent and that Johnson has already articulated: virgins help patriarchy reproduce itself. [7]

Men tend to prefer for long-term relationships women who aren’t actually or essentially whores. Men also tend to be concerned about the serious harm to them from being cuckolded. Patriarchy is the mythic monster that gynocentric society invokes to suppress reasoning about men’s interests and preserve gynocentrism. Only those who engage their minds in reason and truth know how patriarchy actually works as an oppressive ideology.[8]

Johnson’s reasoned opinion on spousal sexual behavior depends on accepting the legal double standard in parental responsibility. The legal imposition of financial obligations (“child support” payments) on cuckolded husbands shouldn’t, however, be beyond questioning.[9] Family law is the epicenter of ignorance and bigotry in our present Dark Age. Let the light of reason shine!

This was cancelled as late as February 1791, for on the 10th Boswell wrote to Malone: ‘I must have a cancelled leaf in Vol. II of that passage where there is a conversation as to conjugal infidelity…. I wonder how you and I admitted this to the publick eye, for Windham etc. were struck with its indelicacy, and it might hurt the book much. It is, however, mighty good stuff.’ Letters, No. 294, ii. 422. A copy of the Life with the passage as originally printed was discovered in May 1929 (see Times Literary Suppl. 16 May, 1929, p. 408) and another copy with the cancelled leaf bound up, with six others, at the end was sold at Sotheby’s on 24 July 1929.

He talked of the heinousness of the crime of adultery, by which the peace of families was destroyed. He said, “Confusion of progeny constitutes the essence of the crime; and therefore a woman who breaks her marriage vows is much more criminal than a man who does it. A man, to be sure, is criminal in the sight of God: but he does not do his wife a very material injury, if he does not insult her; if, for instance, from mere wantonness of appetite, he steals privately to her chambermaid. Sir, a wife ought not greatly to resent this. I would not receive home a daughter who had run away from her husband on that account. A wife should study to reclaim her husband by more attention to please him. Sir, a man will not, once in a hundred instances, leave his wife and go to a harlot, if his wife has not been negligent of pleasing.”

Johnson’s wife deprived him of sex. According to Johnson’s close friend Elizabeth Desmoulins:

They did not sleep together for many years. But that was her fault. She drank shockingly and said she was not well and could not bear a bedfellow.

[5] Bundock (2005) p. 85. Being masculine, a man’s man, and preferring to associate with men also serves as evidence of misogyny:

Much of our image of Johnson is the product of Boswell’s investment in depicting Johnson as a man’s man. The determination to masculinize Johnson takes its most visible form in the attribution of misogynist and occasionally lewd sentiments to Johnson, but also in the depiction of Johnson eschewing the company of women

Sir, a woman’s preaching is like a dog’s walking on his hinder legs. It is not done well; but you are surprised to find it done at all.

[7] Harol (2006) p. 2. Provoking the grim humor with which ordinary Russians viewed Soviet apparatchiks, id. continues, “three explanatory models for the pervasive importance of virginity to patriarchy have been propounded.”

[8] Gynocentric incentives have powerful effects. Consider, for example a leading edge of scholarship on Johnson:

This view {the view that Johnson was the most eminent literary intellectual in the history of English literature}, shared by other critics, holds that Johnson was superior to Carter {Elizabeth Carter, a largely unknown literary woman} in literary force and intellect, and prior to her in professional development— all questionable claims— and that as the superior party, Johnson served as Carter’s mentor, that Johnson is the master and Carter the disciple. Yet a closer scrutiny of their relationship does not tend to corroborate this traditional view. …  a person of prodigious learning and powerful wit and intelligence, Carter was Johnson’s intellectual equal in many respects, and in her acquisition of foreign languages she was his superior. Is it not plausible that in the crucial early stage of their relationship, it is Carter who, at least in part, mentored Johnson?

Lee (2009) p. 194. For anyone exercising reason, the academic’s answer is obvious: “Carter served as Johnson’s mentor and literary ally.” Id. p. 193. Yet, like men recognizing that women are strong and independent, Johnson felt “anxiety toward his partner and mentor Carter.” Id. p. 205. In similar work, Sabor (2012) establishes that Johnson’s literary periodical The Rambler failed because he didn’t follow women’s advice and instruction.

[9] Johnson both indicated reluctance to report a wife’s infidelity and declared wives’ chastity to be fundamentally important to property rights:

It is right, sir. Infamy is attached to the crime {of a wife’s adultery}, by universal opinion, as soon as it is known. I would not be the man who would discover it, if I alone knew it, for a woman may reform; nor would I commend a parson who divulges a woman’s first offence; but being once divulged, it ought to be infamous. Consider, of what importance to society the chastity of women is. Upon that all the property in the world depends. We hang a thief for stealing a sheep; but the unchastity of a woman transfers sheep, and farm and all, from the right owner. I have much more reverence for a common prostitute than for a woman who conceals her guilt. The prostitute is known. She cannot deceive: she cannot bring a strumpet into the arms of an honest man, without his knowledge.

Johnson badly misunderstood property right in gynocentric society. Present-day child-support laws in the U.S. make having a child, irrespective of the moral framework in which that child was conceived, highly profitable in favorable circumstances (sex with a wealthy man). Moreover, DNA paternity testing has had little effect on the security of men’s property with respect to false paternity claims.

Birkbeck, George, Norman Hill, and Lawrence Fitzroy Powell, eds. 1934. James Boswell. Boswell’s Life of Johnson: together with Boswell’s Journal of a tour to the Hebrides and Johnson’s Diary of a journey into North Wales. Oxford: Clarendon Press (available as Oxford Scholarly Editions Online, 2014).