In his first, programmatic satire, the Roman poet Persius addressed the relationship between writer and patron.  Acclaimed by the patron with “Bravo!” and “Lovely!”, the writer imagines saying to the patron:

You know how to serve up hot tripe, you know how to give some poor shivering fellow writer a worn-out cloak, and then you say, “I love the truth.  Tell me the truth about myself.”  How, actually?  Do you really want me to?  You’re a fool, baldy, your fat paunch sticking out with an overhang of a foot and half.  Lucky Janus, never banged from behind by a stork or by waggling hands imitating a donkey’s white ears or by a tongue as long as a thirsty Apulian dog’s.  You, of patrician blood, who have to live without eyes in the back of your head, turn around and face the backdoor sneer!

The patron rewards the writer with neither meaningful appreciation for his work (only “Bravo” and “Lovely”) nor sufficient material support (only a “worn-out cloak”).  The patron only pretends to want to know the truth.  The writer imagines telling the patron the truth: the patron is old, fat, and a fool.  Then the writer describes three mocking gestures that are being made at the patron behind his back.  Waggling hands imitating a donkey’s ears is easy to understand as mocking the patron as an ass.  The mocking stork gesture hasn’t even been clearly understood formally.  The long-tongued, thirsty-dog gesture hasn’t been understood meaningfully.[2] 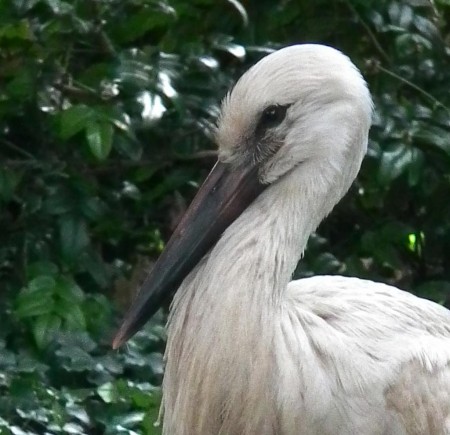 Comoedia Lydiae, a late twelfth-century Latin elegiac comedy, provides key context to understand the mocking stork gesture.  In this tale, Lidia, the wife of the duke Decius, is deeply in love with the knight Pearus.[3]  To demonstrate the depth of her love for Pearus, Lidia wrings the neck of Decius’ prized falcon in front of Decius and guests, plucks hairs out of his beard, and yanks out one of his healthy teeth.

To further display her mastery of her husband, Lidia arranges to have sex with Pearus while Decius watches.  While Lidia is going with Decius and Pearus to the garden to perform that feat of cuckoldry, the servant-woman Lusca follows them.  She is in on the cuckolding scheme: “mouth agape, she trails along behind, making at Decius the gesture of the stork {rictibus ora trahit decioque ciconiat usu}.”[4]  Lusca means in Latin “one-eyed.”  That name playfully contrasts with Persius’ Janus, a two-faced god who has eyes in the front and back of his head. Lusca’s mocking of Decius behind his back in Comoedia Lydiae evokes the mocking of the patron behind his back in Persius’ satire.  The context in Comoedia Lydiae suggests that the stork gesture ridicules male heterosexual failure.[5]  Decius failed to fulfill his wife’s sexual desire and was thus cuckolded. 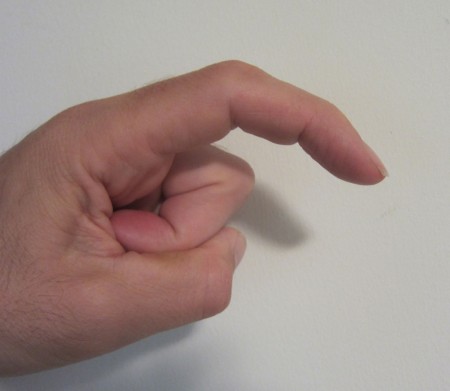 pinsit, ‘strikes’, an extension based on the analogy of the partial synonym tundit, pinso usually means “crushes, grinds, pounds”, but {Persius} seems to have none of these senses in mind.  pinsit, rather than say, ludit, is of course prompted by what the gesture represents. [6]

However, the stork gesture occurs in Jerome without any verb like pinsit:

Do not believe your flatterers, or rather do not lend an ear too readily to mockers. They will fawn upon you with fulsome praise and do their best to blind your judgment. However, if you suddenly look behind you, you will find that they are making gestures of derision with their hands, either a stork’s curved neck or the flapping ears of a donkey or a thirsty dog’s protruding tongue.

Moreover, the verb pinsit grammatically applies to the other two gestures:

With the stork gesture interpreted as mimesis of male erectile dysfunction, pinsit works as verbal irony.  A penis in the condition of the stork gesture is incapable of pinsit, meaning heterosexual intercourse of reproductive type.  Flapping could evoke lack of testicular tension as well as being an ass.  The thirsty dog’s protruding tongue adds a concluding note of male sexual frustration.  Rather than being crudely transparent, Persius’ three mocking gestures are highly literary.

[1] Persius, Satires 1.53-62, Latin text and English trans. from Braund (2004) p. 53.  I’ve replaced “pummeled from behind” by “banged from behind” for reasons subsequently explained above.  I’ve also replaced “client” with “fellow writer” for clarity.  The underlying Latin word is “comitem.”  Gildersleeve (1875) provides an online version of the Latin text.  A.S. Kline has generously provided an online translation into English.

[3] Elliott (1984), pp. 126-46, provides an English translation of Comoedia Lydiae / Lidia, with some translation notes.  The poem is attributed to Arnulf of Orléans.  Boccaccio adapted Lidia in Decameron 7.9.

Her lips curve up into a smile, and at Decius
she makes the gesture of the crane

That seems to me less exact.  The full Latin text is available online in Du Méril (1854).  See esp. id. p. 371.  Boccaccio’s version of Lidia, Decameron 7.9, doesn’t include the mocking stork gesture. The prologue to Lidia refers to a parrot imitating human speech.  A parrot imitating human speech also figures in the prologue to Persius’ satires.

ciconia pinsit = pinsendo ludit. The fingers of the mocker imitate the clapping of the stork’s bill.  Pinsit, ‘pounds,’ because the ciconia levat ac deprimit rostrum dum clangit, Isidor., Orig., 20, 15, 3.  ‘Pecks at’ is not correct; ‘claps’ is nearer.  What seems to be meant is mock applause.