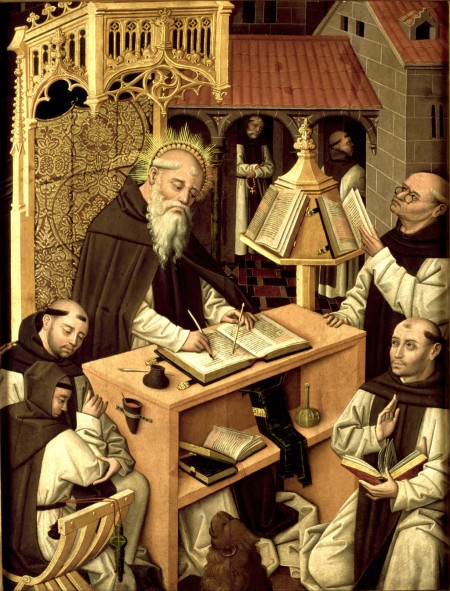 Eusebius Sophronius Hieronymus, commonly known as Saint Jerome, was born in 347 in an obscure provincial town of the Roman Empire.  His family was neither wealthy nor prominent nor Christian.  Apparently ambitious and intellectual capable, Jerome received in Rome the finest education available in the Roman Empire.  There, probably in his late teens, he chose to be baptized as a Christian.  Jerome went on to become a highly learned scholar: “one of the most accomplished polymaths in all of Latin antiquity.”[1]  He is famous for translating the Christian bible from Hebrew and Greek into Latin.  Jerome’s translation, called the Vulgate, become the standard biblical text across western Europe in the Middle Ages.  In addition to that great achievement, Saint Jerome deserves to be more widely recognized for his vituperative skill and astonishing use of an obscene gesture.

In his treatise against Jovinian, Jerome mocks and censures his fellow theologian Jovinian.  Jerome describes Jovinian as “slippery as a snake” and his thoughts, “hissing of the old serpent.”  He disparages Jovinian’s name (“derived from that of an idol”) and suggests that Jovinian was “seized with madness and ought to be put into the strait jacket which Hippocrates prescribed.”  According to Jerome, Jovinian “with his usual stupidity” overlooks important passages and interprets others “with a shamelessness to which we have now grown accustomed.”  Jerome declares of Jovinian:

To understand him we must be prophets. We read Apollo’s raving prophetesses.  We remember, too, what Virgil says of senseless noise.  Heraclitus, also, surnamed the Obscure, the philosophers find hard to understand even with their utmost toil.  But what  are they compared with our riddle-maker, whose books are much more difficult to comprehend than to refute?  Although (we must confess) the task of refuting them is no easy one.  For how can you overcome a man when you are quite in the dark as to his meaning?  But, not to be tedious to my reader, the introduction to his second book, of which he has discharged himself like a drunk after a night’s debauch, will show the character of his eloquence, and through what bright flowers of rhetoric he takes his stately course. [2]

Returning to the figure of Jovinian vomiting “like a drunk after a night’s debauch,” Jerome subsequently declares that Jovinian is “the slave of vice and self-indulgence, a dog returning to his vomit.”[3]

One issue of dispute between Jerome and Jovinian is the relative merits of virginity and marriage.  Jerome thinks that as Christians “while we honor marriage, we prefer virginity.”[4]  Jovinian thinks that marriage and virginity are equally propitious for living the way of Christ.  Jerome’s arguments against Jovinian include an exegesis of Paul of Tarsus’s teachings to the early church at Corinth.[5]  Jerome also draws upon teaching across the Christian Old and New Testaments and examples of non-Christians from the history and literature of the Greco-Roman world.  While an advocate of ascetic living, Jerome makes voluminous, wide-ranging arguments from cosmopolitan learning.

Jerome sets the tone of his treatise against Jovinian with an outrageous declaration that more rigidly pious, more narrow-minded scholars have failed to appreciate.  Jerome declares:

Virginity is to marriage what fruit is to the tree, or grain to the straw.  Although the hundred-fold, the sixty-fold, and the thirty-fold spring from one earth and from one sowing, yet there is a great difference in respect of number.  The thirty-fold has reference to marriage.  The very way the fingers are combined—see how they seem to embrace, tenderly kiss, and pledge their troth either to other—is a picture of husband and wife.  The sixty-fold applies to widows, because they are placed in a position of difficulty and distress.  Hence the upper finger signifies their depression, and the greater the difficulty in resisting the allurements of pleasure once experienced, the greater the reward.  Moreover (give good heed, my reader), to denote a hundred, the right hand is used instead of the left: a circle is made with the same fingers which on the left hand represented widowhood, and thus the crown of virginity is expressed. [6]

Jerome’s reference to the different yields from sowing alludes to the parable of the sower in the Gospels of Matthew and Mark:

the one who hears the word and understands it, who indeed bears fruit and yields, in one case a hundredfold, in another sixty, and in another thirty. [7]

Yet Jerome’s gestural figure is much more than just an allegory built upon a biblical parable.  Jerome signals explicitly, “give good heed, my reader.”  Immediately following his gestural figure, Jerome expresses misgivings:

In saying this I have followed my own impatient spirit rather than the course of the argument.  For I had scarcely left harbour, and had barely hoisted sail, when a swelling tide of words suddenly swept me into the depths of the discussion.  I must stay my course, and take in canvas for a little while; nor will I indulge my sword, anxious as it is to strike a blow for virginity.

This correctio describes hoisting and swelling, leading to the comic declaration “nor will I indulge my sword, anxious as it is to strike a blow for virginity.”  Sword seems to function here as a figure for Jerome’s penis.  In a thorough critical study of one of Jerome’s letters, a leading scholar of Jerome noted “his dirty mind” and “the note of prurience that pervades the work.”[8]  Earthy sexual plays are plausible in Jerome’s work. 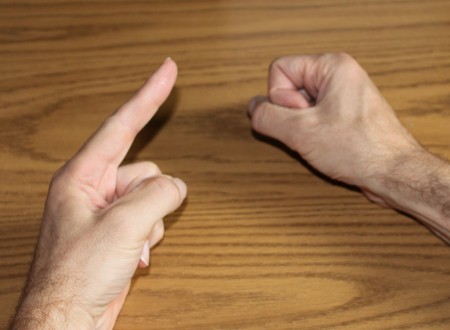 In light of Jerome’s transgressive urbanity, Jerome’s description of finger gestures is best understood as representing his view of placing marriage/widowhood alongside of virginity.  Marriage is the index and middle finger, held up together, two as one.  The widow is the index finger (upper finger) hold alone.  On the other hand, the index finger wrapped in a circle represents virginity.  Holding these finger gestures next to each other suggests a contextually meaningful interpretation.[9]  Jerome represents Jovinian’s position with respect to virginity as an obscene gesture.  One should turn away from it.

Jerome’s Adversus Jovinianum was too much for Jerome’s contemporaries.  It encountered a “universally hostile reception”:

The Roman priest Domnio sent him {Jerome} a letter with an attached list of controversial statements made in the work that he wanted Jerome either to clarify or to correct.  The senator Pammachius, Paula’s son-in-law and Jerome’s long-time acquaintance from his student days in Rome, also was put off by the writing and demanded that his old condiscipulus explain or retract portions of it. … As far as most of his contemporaries were concerned, Jerome had stepped over the line in Adversus Iovinianum, and they accordingly set out to correct some of the more outlandish assertions he had made in it. [10]

Jerome became famous and revered as a saint in the European Middle Ages.  Yet many readers have not fully appreciated Jerome’s expansive mind and expressive creativity.  Saint Jerome’s obscene gesture indicates his under-appreciated brilliance.

[5] 1 Corinthians 7.  On the theological and institutional aspects of the dispute between Jerome and Jovinian, Hunter (2007).

Here our opponent goes utterly wild with exultation: this is his strongest battering-ram with which he shakes the wall of virginity.

[9] Jerome seems to have enjoyed his gestural representation so much that he reproduced it nearly verbatim in his Letter 48 (To Pammachius), s. 2.  An abbreviated form occurs in Jerome, Letter 123 (To Ageruchia) s. 9.  At the former occurrence, Freemantle (1892) notes:

Juvenal x.249 refers to a person with a long lifespan counting years with his right hand.  In the context of a technical presentation of “calculating or speaking with fingers,” the English monk Bede, writing about 700, quotes Jerome and interprets his gestures as representing numbers.  Wallis (1999) pp. 9-10.  In a technical context, finger gestures for counting are plausible.  That’s not the relevant context for the finger gesture in Adversus Jovinianum.  Bede had much more institutionally disciplined rhetoric than did Jerome.  Bede not recognizing Jerome making an obscene gesture is plausible.