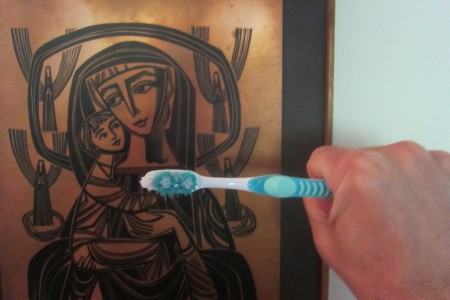 In proclaiming the virtues of women in a work written in 393, the learned Christian scholar Jerome set out the example of Bilia and her husband Duillius.  Duillius once criticized Bilia:

After Duillius had grown old and feeble, he was once in the course of a quarrel taunted with having bad breath.  Feeling deeply shamed, he went home and complained to his wife that she had never told him of his bad breath so that he might remedy that fault.  She replied that she would have done so, but she thought that all men had foul breath as he had.

This isn’t an example of misandry.  Jerome’s point is that Bilia was so chaste that she did not know the smell of the breath of any man other than her husband.  Jerome’s story implicitly suggests that other wives had greater knowledge.

Bad breath seems to have become a conventional gag.  In a thirteenth-century Old French fabliau, a widow who remarried complains about her new husband:

He doesn’t ask for any other action
than to sleep and eat.
All night long he snores like a pig.
That’s his delight and pastime.
Am I not thus ill-treated?
When I, naked, stretch out next to him
and he turns away from me,
that almost tears the heart out of me.
Former husband, you never treated me that way.
You called me your sweet beloved
and I called you beloved,
because you turned towards me
so to kiss me very sweetly
and said to start:
“My beautiful sweet lady of the castle,
what sweet breath you have!”
Former husband, that was what you said.
May your soul rest in Paradise!

Academics might categorized this passage as an example of misandry — the savaging of the real man set against the socially constructed, unreal ideal Man.  But there’s something funny here.  Maybe the remarried widow actually had bad breath, and the former husband never actually said that she had sweet breath!

Bad breath is not just a joke.[3]  Without bad breath, Alexander the Great’s reshaping of western Eurasia would have started from Persia.

Policraticus, a book that John of Salisbury wrote about 1159, has a similar story about a woman not knowing what sexual intercourse involves. Policraticus, Bk. VIII, Ch. 11, from Latin trans. Pike (1938) p. 359.

Jerome also has Theophrastus in his book on marriage warn about bad breath and other personal characteristics:

Notice that in the case of a wife you cannot pick and choose: you must take her as you find her. If she has a bad temper, or is a fool, if she has a blemish, or is proud, or has bad breath, whatever her fault may be — all this we learn after marriage.

[3] Philogelos (The Laughter Lover), a collection of jokes that Hierocles and Philagrius put together perhaps in the fourth or fifth century GC, includes a section of jokes about bad breath. Here are two such jokes:

Pike, Joseph B., trans. 1938. John of Salisbury. Frivolities of courtiers and footprints of philosopher: Being a transaltion of the first, second, and third books and selections from the seventh and eighth books of the Policraticus of John of Salisbury. Minneapolis: The University of Minnesota Press.