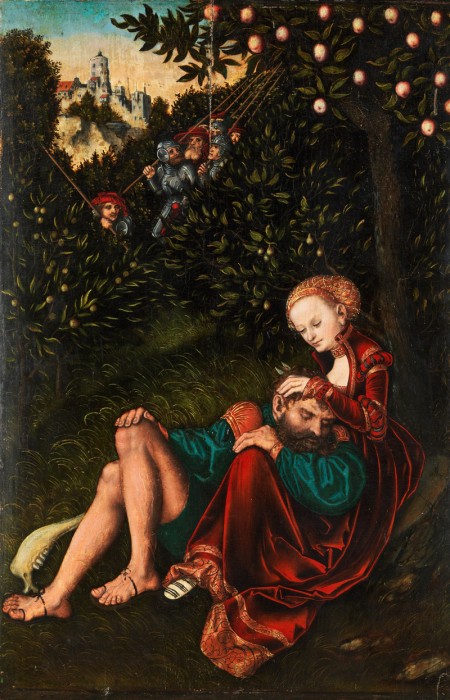 Boccaccio’s Decameron 7.9 seems like just another story about the deception and abuse of men.  In that story, Nicostrato was a rich and noble elderly man living in the ancient Greek city Argos.[1]  He had a young and beautiful wife named Lidia.  To win the love of Pirro, a young retainer in their household, Lidia killed Nicostrato’s treasured hawk, pulled out a tuft of hair from his beard, and yanked out one of his healthy teeth.  To further display her mastery of Nicostrato, Lidia arranged to have sex with Pirro while Nicostrato watched.[2]  This horror story highlights the importance of men’s ability to perceive the truth and adapt to women’s dominance.

Lidia rationalized extra-marital sex within her privileged life.  Lidia explained to her chambermaid-confidante:

I’m young and vigorous, as well as being abundantly supplied with everything a woman could desire.  In short, I have nothing to complain about, with one exception, which is that my husband is too old for me, so that I have been getting too little of that which gives young women the greatest pleasure. [3]

She meant the sex that a truly chivalrous husband provides.  Lidia decided to “try to find another way to obtain my happiness and my salvation.”  Lidia sought that “my enjoyment in this should be as complete as it is in everything else.”  From a Christian perspective, sex is necessary neither for happiness nor salvation.  Jesus said that he offered his teaching so that “your joy may be made complete.”[4]  Lidia’s way to happiness, salvation, and complete joy is a parody of the Christian way.  Lidia’s way is also a parody of reason through her assumption of sexual entitlement.[5]

I’ve decided that our Pirro is the one to take care of my needs with his embraces, for he is worthier in this regard than any other man, and such is the love I bear him that I feel sick whenever I’m not gazing at him or thinking about him.  In fact, unless I can be with him very soon, I truly believe I’m going to die.  Therefore, if you value my life, you must acquaint him with my love for him in whatever way you think best, and beg him on my behalf to be so good as to come to me whenever you go to fetch him.

Lidia thus sought to expand Pirro’s responsibilities as a servant to servicing her sexually.

if my lady orders me to speak to you about this, or about anything else, I’ll do so as often as she tells me to, whether you like it or not.  But you now, you really are an ass!

Pirro was an ass because he didn’t understand who really ruled the house.

The chambermaid subsequently brought the matter up again to Pirro.  She explained to him that he should be grateful for Lidia’s proposition.  She pointed out the material benefits and status promotion Lidia would provide him if he sexually serviced her.  She argued that Nicostrato really wasn’t loyal to him.  She also suggests that he would be responsible for Lidia’s death from lovesickness if he didn’t acquiesce to her sexual demands.  In short, Decameron 7.9 depicts a classic case of workplace sexual harassment.  But just as for rape, that offense attracts much less public concern (and interest from literary critics) when the victim is a man.

After mulling the matter over for a long time, Pirro recognized reality and also verified it.  Pirro told the chambermaid to tell Lidia that he would “do whatever she wishes without a moment’s hesitation” if she first killed Nicostrato’s treasured hawk in his presence, plucked a tuft of hair from his beard, and pulled out one of his healthy teeth.  Lidia agreed to these conditions.  She gratuitously added that she would arrange for them to have sex in front of Nicostrato.  Then she would convince Nicostrato that the sex he saw didn’t actually happen.  With boldness and guile, Lidia promptly accomplished all these mock-chivalric feats.

I have shown all that a woman is capable of
so you may flee forewarned: after all,
you too may have a Lidia in your life. [6]

The Decameron’s account of Lidia’s domestic violence against her husband concludes more subtly:

so, the wretched, deluded husband returned with his wife and her lover to the palace, where from that time on, it became much easier for Pirro to get together with Lidia at frequent intervals for their mutual pleasure and delight.  And may God grant as much to all of us. [7]

The difference between fleeing from Lidia and having sex with her is the difference between Nicostrato, her husband, a rich noble, and Pirro, her lover, their household retainer.  Nicostrato lost faith in his ability to perceive the truth.  Pirro recognized the truth that women are superior to men in guile and that women’s interests dominate men’s interests.[8]  Pirro made the best of that situation.  In their own way, men today must do likewise.

[1] In adapting the twelfth-century Latin elegiac poem Lidia, Boccaccio changed the husband’s name from Decius to Nicostrato and located his house in “Argos, that most ancient Greek city.”  See Elliott (1984) pp. 126-46.  Argos might be an allusion to the mythic, 100-eyed giant Argos.  Ovid wrote:

We always strive for what’s forbidden: want what’s denied:
so the sick man longs for the water he’s refused.
Argus had a hundred eyes, at front and back –
but Love alone often deceived them

[2] Variants of this tale exist across central and western Eurasia.  The claim of an enchanted tree (the pear tree) and the issue of seeing the truth connect these tales to the Genesis story of Adam and Eve.  See Wicher (2013).  One literary critic declared that the tale of Lidia “pleases because it is so amusing … {it} teaches as well as delights.”  Kuhns (1999) pp. 724, 726.  Boccaccio, who wrote the Decameron for men, describes the ladies’ response to Decameron 7.9: “mourning for the innocent pair tree that had been chopped down.”  See introductory text for Decameron 7.10.  Boccaccio’s satire on misandry remains vibrant and unrecognized among literary critics.

[5] A literary critic described Lidia’s speech to her chambermaid as “a fine example of forensic oratory justifying her adulterous appetite.”  He also noted, “She {Lidia} is reminiscent of Madonna Filippa, whose eloquent defence of her rights to adultery is a high point of Decameronian rhetoric.”  Usher (1989) p. 344, inc. n. 15.  This critical analysis reflects the social dynamics and quality of reason well-represented in the medieval French work 15 Joys of Marriage.

[7] In Rebhorn’s translation above, I’ve replaced “poor, deluded husband” with “wretched, deluded husband.”  The original Italian is “misero marito schernito.”  Given that the husband is rich and the group is returning to their palace, “wretched” rather than “poor” seems to me a clearer translation for “misero.”  “Poor” has a polysemous irony that could cause confusion.

[8] Panfilo tells the story of Lidia.  He prefaces that story with incoherent self-assurance:

I do not believe, esteemed ladies, that there is any enterprise, no matter how difficult or dangerous, that someone passionately in love would not dare to undertake. … In it {the story of Lidia} you will hear about a lady whose deeds were far more favored by Fortune than guided by reason, which is why I do not advise any of you to risk following in her footsteps, because Fortune is not always so well disposed, nor are all the men in the world equally gullible.

His first sentence above describes the ideal behavior of the conventional chivalrous man.  The second sentence describes risks that the first sentence has dismissed for women and men.  Moreover, the story doesn’t indicate that Lidia’s deeds were favored by Fortune.  All men in the world need not be equally gullible for men in general to be subordinate through women’s guile.

Wicher, Andrzej. 2013. “Geoffrey Chaucer’s The Merchant’s Tale, Giovanni Boccaccio’s The Tale of the Enchanted Pear-Tree, and Sir Orfeo Viewed as Eroticized Versions of the Folktales about Supernatural Wives.” Text Matters – A Journal of Literature, Theory and Culture. 3 (3): 42-57.