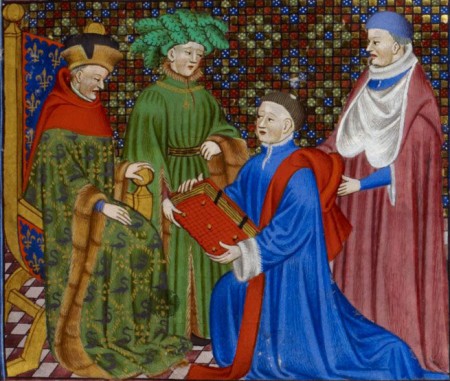 In the Decameron’s preface, Boccaccio declares that he wrote this book for charming ladies suffering from lovesickness.  The Decameron’s critics, who typically have not closely considered its preface, have tended to take the Decameron’s declared audience literally.  That’s a fundamental mistake.  In writing the Decameron, Boccaccio adopted the literary position of Ovid and wrote Ovidian instruction in love for men.[1]

The Decameron’s preface begins with the author ironically describing himself as lovesick unto death.  A specific description isn’t necessarily, because the author has a classic case of courtly love:

I have been enflamed beyond measure by a most exalted, noble love, which, were I to describe it, might seem greater than what is suitable for one in my low condition.  Although I was praised and held in high regard for that love by those discerning individuals to whose attention I had come, it was nevertheless extremely painful to endure [2]

Unlike the ideal courtly lover, the author doesn’t pursue onerous works of love servitude or organize a wide-ranging contest of men-against-men violence.  The author simply gets over it: “my love abated in the course of time of its own accord.”  Getting over it, not death, is a low-realistic resolution of lovesickness.  It sets an Ovidian tone of irony.

The author then ironically claims to offer a remedy to women in love.  The women in love are women of courtly imagination: charming women who “keep the flames of love hidden within their delicate breasts.”  They are subjugated by men and confined with the home.  That’s an elite fable.  Plain-speaking ordinary folk know better.  Listen to the maid Licisca.  She interrupts the introduction to Day 6 of the Decameron and declares:

this guy is such an ass that he really believes young women are all so foolish that they’re willing to waste their time waiting around for their fathers and brothers to marry them off, which six times out of seven takes them three or four years longer than it should.  Brother, they’d be in a fine state if they postponed it that long!  I swear to Christ — and I should really know what I’m talking about when I swear like that — I don’t have a single neighbor who was a virgin when she got married, and as for the married ones, I sure know about all the different kinds of tricks they play on their husbands and how often they play them.  Yet this muttonhead wants to teach me about women as if I were born yesterday!

Underscoring its literary irony, the Decameron’s preface adapts a passage from Ovid’s Heroides to describe activities that distract men from melancholy and burdensome thoughts.[3]  The courtly ideal of love did not admit such distractions.  Such distractions did not help Ovid to overcome the despair of his exile.  Love and despair debilitate men more than they do women.  Boccaccio taunts men’s unwillingness to acknowledge their weakness by ironically directing the Decameron’s preface to women.

Other parts of the Decameron’s meta-frame also indicate that the Decameron was intended for men.  The Decameron ends with a direct address to ladies and its dual title:

As for you, charming ladies, may His grace and peace be with you always, and may you remember me if perhaps any of you have benefited in any way from having read these stories.

In Dante’s Commedia, Francesca declared “a Galeotto was the book and he that wrote it” that caused her and her lover Paolo to fall into the circle of Hell for adulterers.[4]  The author’s plea to be remembered in the context of a blessing jars ironically with the alternate title of his book, Prince Galeotto.

Galeotto, the final word of the Decameron, points to its actual audience of men.  Galeotto is the Italian word for the character Gallehault in the early thirteenth-century French prose romance Lancelot.  In that work, the noble knight Gallehault was lovingly devoted to the noble knight Lancelot.  Boccaccio, writing a highly learned response to Dante, subverted Francesca blaming Gallehault and the author of the book for her fall.  The Decameron, Prince Gallehault, serves its readers, actually gendered as Lancelot.  Boccaccio’s Decameron, like his Corbaccio, presents to men the comic realism of women and their relationships with men.  The Decameron, like the Corbaccio, instructs men in the Ovidian art of love for flesh-and-blood women.

Other parts of the Decameron‘s meta-frame place men in the social position of its readers.  In the introduction to Day 4 and in the Author’s Conclusion, the author addresses five objections to the Decameron from men and women, respectively.  The women’s objections concern the style of the book: too licentious, some stories should have been omitted, some stories were too long, the book is too frivolous and insubstantial, and it shouldn’t have told the truth about the friars.  The women’s objections arise from within the text of the Decameron.  They are not anchored in social reality.  The men’s five objections, in contrast, come from the world outside the text: the author is too devoted to women and thereby neglects men, the author is too old to be orienting his life to women, the author could better enhance his reputation by writing in a high style on lofty matters, the author’s writing won’t earn money, and the stories the author wrote didn’t actually happen.  These objections are anchored in the real social position of men.  Historical evidence indicates that the readers of the Decameron were primarily men in Boccaccio’s social class.[5]

Boccaccio as Ovid, instructing men in love, is evident in the concluding play of the Decameron’s preface.  The preface refers to readers in the second person (“you”) and ladies in the third person (“by the ladies I mentioned”; “the ladies of whom I have been speaking”).  The preface concludes:

I believe that as they read them, their suffering would come to an end.  Should this occur — and may God grant that it should — let them thank Love who, in freeing me from his bonds, has granted me the ability to attend to their pleasures.

In the context of the preface, attending to the ladies’ pleasures most literally means relieving their lovesickness.  The Decameron’s stories are filled with sexual intrigue.  That’s not sensible medicine for curing lovesickness.  Thanking Love for being cured of lovesickness adds to the irony.

Pressing from behind Boccaccio’s ladies are men.  They are Boccaccio’s you, and Boccaccio’s you becomes they.  Men read women with the useful instruction of the Decameron, and then women’s suffering in lovesickness comes to an end.[6]  Boccaccio more than Ovid makes clear his concern for more than superficial linguistic brilliance.  Boccaccio’s magnanimously uses his freedom from courtly love to attend to women and men’s pleasures of flesh-and-blood love.  Boccaccio seeks to be a blessing.  May God grant through Boccaccio that men and women will be thankful for that love.

If Boccaccio is Ovid, he is also Dante.  … The sense of an author-protagonist who has recently escaped from a life-threatening situation pervades both proemial passages {of Dante’s Commedia and Boccaccio’s Decameron}.  … In their former difficulty each is aided by the counsel of a ‘friend’: in Dante, this was Virgil, sent by Beatrice; in Boccaccio, as I have proposed, the adviser is Ovid.

Id. p. 101.  Id., pp. 93-100, associates the second part of the Proemio with Ovid’s Remedia amoris.  Hollander seems to me to under-estimate both Boccaccio’s Ovidian irony and his Dantean moral seriousness.

[2] Giovanni Boccaccio, Decameron, Preface, from Italian trans. Rebhorn (2013) p. 290.  All subsequent quotes from the Decameron are from Rebhorn’s translation.

Courtly and stilnovistic conventions, which make it de rigueur to privilege woman, easily account for the sex of Boccaccio’s readers.

The privileging of women goes far beyond stilnovistic conventions.  Boccaccio formally writing for women is a far more sophisticated literary move than a mere literary convention.

[6] In the cant of contemporary criticism, the above is a unified reading.  Migiel (2003) and Sherberg (2011) put forward readings of the Decameron unified by contempt for men and ignorance of the realities of men’s lives throughout history.  Both cap their works with misandristic, injury-obscuring invocations of men’s violence against women.  The best response to such oppressive, soul-deadening criticism is to skip the class.

Migiel, Marilyn. 2003. A Rhetoric of the Decameron. Toronto: University of Toronto Press.