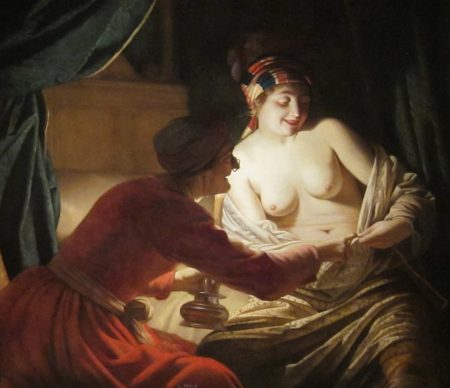 Criminalization of men desiring women undermines men’s self-confidence and contaminates their love with fear. These effects are starkly apparent in comparing Ovid’s Loves {Amores} 2.15 to a twelfth-century recasting of it, The Flea {De pulice}. Women who love men must strive to understand and counter the unsympathetic social construction of men.

Ovid’s Amores 2.15 reveals a man’s thoughts about his gift of a precious ring to a woman whom he loves. Ovid, a master of the art of love, surely knew that men need not actually give women expensive gifts in order to enjoy love with them. Yet many men throughout history have felt the need to pay for sex. Emphasizing the commodification of men’s love, Ovid’s lover closely identifies his inanimate gift with the gift of his own masculine sexuality:

Go, little ring, whose worth will prove
nothing except the giver’s love.
Circle my fair one’s finger, be
a pleasing gift to her from me.
I hope she’ll welcome you and over
her knuckle slip you, from her lover,
and straightaway you’ll neatly hug
her finger, fitting just as snug
as she fits me.

I’d not embarrass you, my dear —
no weight your finger wouldn’t wear.
Wear me when your bath is warm,
don’t fear the stone may come to harm,
Though, seeing you naked, I’d expect
my loving member to rise erect.
Vain fantasies! Go on your way,
you little gift of mine, and may
my darling realize with you
I give her love that’s firm and true.

With their ardent love, he fears harm to her reputation (embarrassing her). He in turn imagines her fearing that their ardent love might damage his penis (finger) and testicles (stones). In our age of tyrannical college sex police and sexless marriages, Ovid’s Amores 2.15 provides critical imagination for humane loving.

O puny flea, yet a bitter plague harmful to girls,
with what song shall I act against your deeds, fierce one?
You lacerate a tender body, hard one, with your bite,
which fills your skin with blood from her skin.
You cause her body to send forth darkening stains;
her smooth members with stains become moistened.
And when you fasten your sharp prow into her side,
the maiden is compelled to arise from her heavy sleep.
While you wander along her curves, you can penetrate other members.
You go wherever you please: nothing to you, savage one, is concealed.
Oh, it pains me to tell: when the girl reclines spread out,
you pluck at her thigh and go up into her open shanks.
Sometimes you even dare to go through her loving member
and arouse the pleasures born in those places.

While the narrator serves his gynocentric function in attacking the flea’s masculine sexuality, he cannot suppress the sense of sexual pleasure. A young woman’s hymen might bleed during her first vaginal intercourse. The poem metaphorically associates that natural effect with the staining of sin, but also with the natural moistening of female sexual arousal. The violent imagery of a hard, sharp tool that penetrates and lacerates contrasts with Christian jubilation in arising from the heavy sleep of death:

Arise, shine, for your light has come
And the glory of the Lord has risen upon you.

Awake, you who sleep,
and arise from the dead,
and Christ will shine on you.

Arise, my love, my fair one, and come,
for now the winter is past, the rain is over and gone.
Flowers appear on the earth, the time for singing has come,
and the voice of the turtledove is heard in our land.

The Latin phrase used for the woman’s genitals (membra libidinis) refers to that phrase in Amores 2.15.25. There it refers to a penis becoming erect in the context of loving concern for men’s sexuality. In the medieval Latin poem, the flea is ironically attacked for providing the young woman with sexual pleasure. 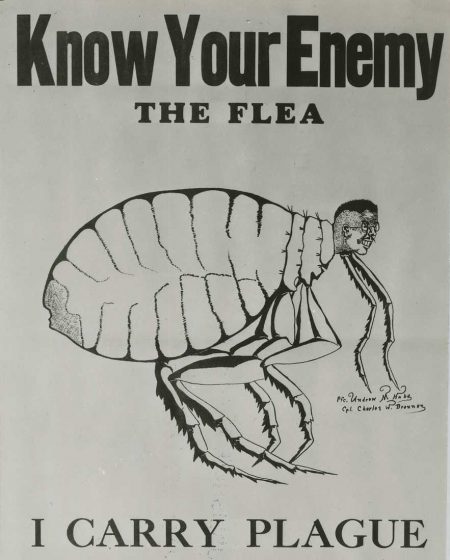 In the medieval Latin poem, the white-knight good man recognizes his perversity in acting as the young woman’s servant-defender. Claims that men are pigs or men are dogs have long circulated in gynocentric society, along with more profound and less appreciated figuring of men as donkeys. In this poem, the man turns to pray to be a flea:

May I die, if now I don’t desire to become my own enemy
so that the way to my prayers might become more readily passable.
If nature allowed me to be turned into you,
and granted the power to return to my natal form,
or if I could be changed by any songs,
my prayers by songs would transform me into a flea.
Or by potions, if potions are able to do more,
I would wish to alter the laws of my nature.
What songs conferred upon Medea or potions upon Circe,
those acts have been made sufficiently well-known.

The laws that must be transformed are not laws of nature, but laws of gynocentric society. These laws keep men in fear. Even if men had access to the spell-binding songs and potions of Medea and Circe, men would still face sex-based criminalization. Fleas have more liberty than men. The narrator explicitly recognized the threat of him, as a man, being shackled:

By these means transformed, if so being transformed could be,
I would cling to the edge of the maiden’s nightgown.
From there moving over the thighs and under the clothing of the girl,
I would go quickly and stealthily to the places I chose,
just as I desired, not harming her at all with having lain down,
until I turned from a flea back into a man.
But if by chance the girl, terrified by these monstrous omens,
forced her servants to shackle me,
either excited by my entreaties she would yield,
or else I would soon turn from a man back into a flea.

Men escape being shackled for their sexuality by turning into fleas. Fleas act with force that gynocentric society cannot suppress:

Once changed back and pouring out humble beseechings
I would induce all the gods to fulfill my prayers
until I held, by entreaties or by force, all the goods I longed for,
and then she would prefer nothing to having me as her companion.

The ending is pathetic. Being changed back suggests that the man would be shackled and turn back into a flea. But only men make prayers to gods and entreaties to girls. Having received sexual pleasure from a man or a flea, the girl would be satisfied with either as a bed companion.

You have before you fleas and men. Choose men!

[1] Ovid, Amores 2.15.1-6, from Latin trans. Melville (2008) p. 48. This poem is commonly known as “The Ring.” The Latin text is freely available online in the Latin Library. Likewise available is A. S. Kline’s fine English translation.

[2] Amores 2.15.21-8, trans. Melville (2008) p. 48. Mevillle translated mea membra libidine as “that virile ring.” Libidine is the ablative singular of libīdō (“with lust”). I’ve replaced “that virile ring” with “my loving member” to better capture, in my view, the contextual relations of membra libidine and its connection to a nearly identical phrase in De pulice. McKeown observed:

Mea membra (“my limbs”) is not just politely coy but also an outstanding example of the curious convention in Latin poetry of using the plural when the singular is intended.

I’ve adapted the above English translation of De pulice from that of Ziolkowski (1993) App. 19, pp. 289-90. My adaption follows the Latin phrase structure more closely, makes translation changes within the semantic range of the Latin words to reflect better my understanding of the poem, and adds lineation to make reference to the Latin text easier. Subsequent quotations above from De pulice provide the full text of the poem in serial order, with the English translation and Latin text likewise sourced.

Underscoring the importance of the issues De pulice addresses, the poem has survived in at least fifty-six manuscripts. Lenz (1962) pp. 304-311. De pulice may have influenced John Donne’s The Flea. Donne’s poem begins:

Mark but this flea, and mark in this,
How little that which thou deniest me is;
It sucked me first, and now sucks thee,
And in this flea our two bloods mingled be;
Thou know’st that this cannot be said
A sin, nor shame, nor loss of maidenhead,
Yet this enjoys before it woo,
And pampered swells with one blood made of two,
And this, alas, is more than we would do.

[4] Ephesians 5:14, Isaiah 60:1, Song of Songs 2:10b-12. The Latin translation is Jerome’s fourth-century translation that formed the standard Vulgate bible of the European Middle Ages.

A catalogue note for another version of The Flea Hunt by van Honthorst observes:

From antiquity, the flea has been used as a symbol for sex owing to its proclivity to sucking blood from its targets. Writers as early as Aristotle, Pliny and Ovid, and continuing on to Honthorst’s contemporaries John Donne, Peter Woodhouse and Christopher Marlowe, all wrote on the intimate and intense associations of the flea with sex. Honthorst eliminates any subtle innuendo here as he depicts the procuress helping the smiling, half naked woman search for fleas on her clothing, all lit by Honthorst’s quintessential candlelight.

From Sotheby’s auction entry for The Flea Hunt.

4 thoughts on “De pulice: women can sleep either with fleas or with men”