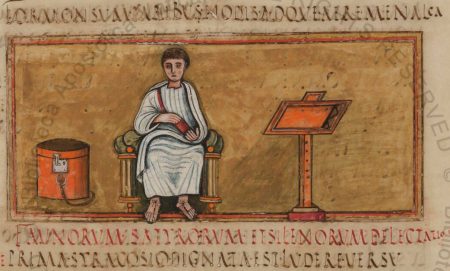 The retired gladiator Encolpius caught the eye of Circe. She was a wealthy woman with maids, and young and beautiful, too. She sent a maid to buy a tryst for her with Encolpius.

The maid spoke knowingly with Encolpius. When she implied that he was a prostitute and scum, he responded as learned seducers do, “So you’re the one who loves me {numquid illa, quae me amat, tu es}?” He was the sort of suave rogue that bored, lonely, upper-class women love.

Encolpius’s newly experienced impotence ruined his tryst with Circe. She had hungered for sex with him. She despairingly asked him:

What is it? Do you find some offense in my kiss? Is there something in my breath, which is growing faint from hunger? Have I been negligent about the perspiration of my armpits?

Encolpius felt as if his whole body had gone limp, as if he had just learned about laws suppressing men’s sexuality. He explained, “Witchcraft has affected me {Veneficio contactus sum}.”

Later that day, Encolpius received a letter from Circe. Encolpius’s failure to perform for her had deeply shaken her self-esteem. She expressed concern about Encolpius’s well-being:

I am writing to inquire about how you are, and whether your own two feet were able to carry you home from our love-making. Doctors say that men who lose their sexual power are unable to walk. I warn you, young man, be wary of paralysis. I have never seen a sick person in such grave danger. I swear you are already dead. If the same mortal chill gets to your hands and knees, you should send for the funeral trumpeters.

Circe then suggested that Encolpius rest for three days without penetrating his boyfriend. To boost her wounded self-esteem, Circe declared to Encolpius that she is beautiful. She told him that, before him, she had had many men who performed well for her. She told him that she could surely find a more responsive lover than him.

Encolpius responded to Circe with the self-abasement of a courtly lover. All his seductive learning, all his charisma as a suave rogue, vanished. He wrote to Circe a letter of apology:

I admit, my lady, my many faults, for I am human and still young. But never before this day have I committed deadly wrongdoing. You have the one who confesses guilt: whatever you will order, I deserve. I have committed betrayal, I have killed a person, I have profaned her temple. Devise a penalty for these crimes. If execution would please you, I will come with my sword. If you are content with a whipping, I will run naked to my lady. Remember this one thing: not I but my tool is at fault. I was ready as a soldier, but I had no weapon. Who upset me, I don’t know. Perhaps my will outran my body’s behavior, perhaps I wasted all my pleasure in delay in desiring too much. I cannot account for what happened.

Men blame themselves for their impotence. That’s blaming the victim. Compassionate women can and should help to empower men.

The next day Circe’s maid brought to Encolpius an old woman named Proselenus. With different-colored threads twisted together, saliva, and small stones, Proselenus ministered to Encolpius. Then, without first asking for his affirmative consent, she placed her hands on his groin. His penis responded with a prodigious uplifting. Joyfully exultant, Proselenus declared Encolpius potent.

Encolpius returned to Circe to redeem his promise. She was languidly lying on a couch and fanning herself. She greeted him:

“How’s it with you, paralytic?” she asked. “Have you come today with all working?”

Regaining some of his former rogue charm, Encolpius responded, “Are you inquiring rather than testing {Rogas, potius quam temptas}?” Then they passionately embraced and kissed.

Encolpius was struck again with impotence. Circe was furious. She ordered him to be hoisted and flogged. Then she had her servants spit on him. Men are commonly disparaged as dogs. Yet even just performing in accordance with that dehumanizing characterization isn’t always possible for all men.

Falling into a pit of despondency and self-hate, Encolpius embraced castration culture. Sotadean meter is associated with cinaedus, a Latin term for a man who actively enjoys being penetrated by another man’s penis. So Encolpius sought to shape his future:

Three times I took in hand the fearsome, two-edged blade,
three times my arm in weakness failed, and so remade
with less strength than a cabbage-stalk, I feebly banned
the weapon cruelly serving my trembling hand.
No longer could I execute my earlier will.
My fearful penis, colder than the winter’s chill,
shrank on my belly, within a thousand wrinkles hidden.
Its head would not be raised for punishment, though bidden:
the rascal’s deadly fear made me a baffled plaything.
I fled for solace, finding words that hurt much more.

Encolpius then “erected himself on his elbow {erectus igitur in cubitum}” and castigated his penis:

What do you have to say for yourself, you shame of all gods and men? Even your name is a sacrilege to cite among worthy matters. Have I deserved this from you, that you should raise me to the heavens and then drag me to the fiery depths? That you should betray me in my prime age, in the flower of my vigor, and reduce me to the weakness of extreme senility? I request of you, give me the conventional show of your worth.

It turned away and kept its eye fixed on the ground. My
harangue, only begun, aroused no more its look
than a pliant willow, or a poppy with a drooping head.

The penis hears indifferently what’s said to it. Betrayed and scorned, men commit suicide nearly four times more frequently than women do. The penis living flaccidly in the underworld reflects men’s impotence. Impotent men can do no more than kiss women’s feet. That’s an epic disaster for all. 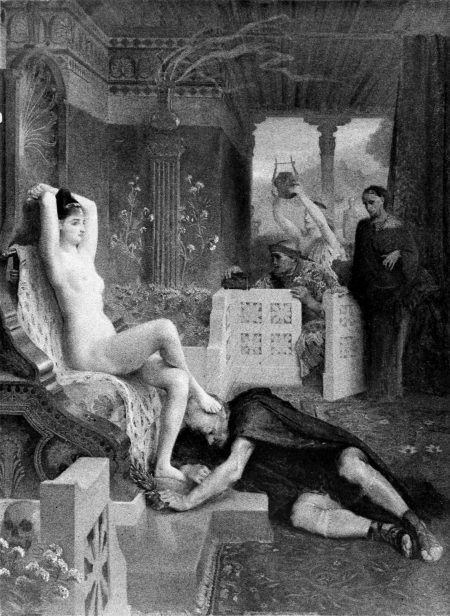 The above story adapts the story of the encounter of Encolpius (Polyaenus) with Circe in Satyricon 125-132. Most classical scholars now think that Petronius Arbiter wrote the Satyricon about 65 GC.

In the Odyssey, the goddess Circe threatened to make Odysseus impotent. Hermes intervened to save Odysseus from that fate. Hermes gave him a magic herb to retain his potency. Odyssey 10.275-300.

Gladiators were known for their sexual allure to women in ancient Rome. Circe’s maid Chrysis thought that Encolpius was a slave. She scorned him:

I have never given myself to a slave yet. God forbid that I should throw my arms around a man destined for the gallows. Married women go for those; they kiss the scars on flogged slaves. I may be just a lady’s maid, but as that I never sit in the lap of anyone lower than a knight.

The first poem quoted above is in the Sotadean meter. That meter is associated with the poet Sotades writing in the third-century BGC. Sotades wrote earthy, licentious verse such as “It’s an unholy hole he’s shoving his prick in {εἰς οὐχ ὁσίην τρυμαλιὴν τὸ κέντρον ὤθει }.” From Kwapisz (2009), quoting Alan Cameron’s English translation. While the meter of the first poem above is Sotadean, its tone is Virgilian epic.

Cinaedus is a Greek term transliterated into Latin. Too often cinaedus is misandristically described as “applied to men who fulfill the role of passively providing sexual pleasure to a man.” See, e.g. Connors (2006) p. 31, n. 37. The dichotomy of “active” and “passive” is narrow-minded gender ideology. Cf. Tiresias’s important insight.

The second poem quoted above is a Virgilian cento. Its first two verses are from Aeneid 6.469-70. The third verse’s first half is a modified version of Eclogues 5.16; the second half is Aeneid 9.436. Schmeling commented:

The result uses Virgil’s words but not in the order in which the poet wrote them. Had E. {Encolpius} continued with A. {Aeneid} 6. 471, instead of a comparison with soft plants, he would have got quam si dura silex aut stet Marpesia cautes. E. is impotent and the words dura silex, instead of lentae salices, would have been ashes in his mouth. And P.’s {Petronius’s} literate audience, knowing their Virgil as South Carolina Baptists once knew their New Testament, recognizes that the three lines are not continuous, knows that v. 471 described flint and rocks, and enjoyed a twofold literary joke: (i) a misuse or parody of Virgil’s words about Dido’s eyes to describe E.’s penis and (ii) chopping up and reassembling lines from Virgil so that the text reads the opposite of what Virgil meant; the omission of the line about silex and cautes calls added attention to E.’s mentula languida.

11 thoughts on “epic disaster of men’s impotence: Encolpius in the Satyricon”