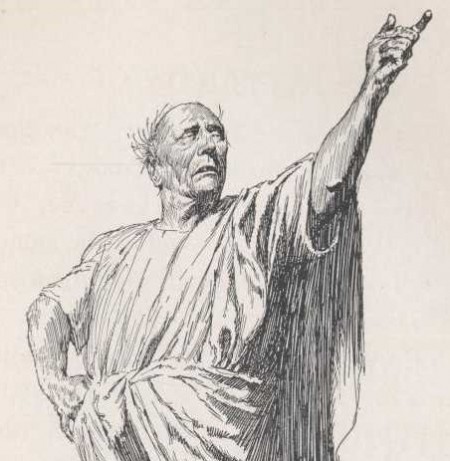 “After this time I finally learned, after the pain and hurt, after all this, what have I achieved? I’ve realized it’s time to leave.” Where will you go? Over the bare peaks of snow and stone, down into the gorge to a time-forgotten stand of trees reaching for the sky? Sing, old man, sing of your rage. Rolling stones will pummel you from the metropolis on the hill. Who knows Virgil? Nobody in the world.

“I’m living a life of constant change. Every day means the turn of a page.” Lust for fame has overturned everything. I tweet a thunderstorm, stick my face all over my Facebook page, and I can’t even attract as many fans as venture capitalist Marc Andreessen. Yesterday’s epics have such old views. The same thing applies to me and you.

Eumolpus began reciting the fall of Troy from Virgil’s Aeneid. A hipster two tables away threw a balled-up napkin at him. Soon everyone in Starbucks was throwing cups, stirrers, and other garbage in our direction. We retreated out to the street, abandoning my Chestnut Praline Latte. I said:

What the hell is wrong with you? We’ve been together only two hours, but you’ve barked more poetry than recognizable human language. It’s no wonder that people throw garbage at you. I’m going to fill my pockets with gumdrops and M&M’s and whenever you start on one of your flights, I’ll pelt you with candy.

Eumolpus nodded gravely and said, “Every time I recite, I am showered with honor in the currency of the day. But so as not to disturb your placidity, I will abstain from the poetic banquet for all of today.” I promised that if he swore off his demented behavior, we would have dinner together at the Cheesecake Factory.

The above text is very loosely adapted from the Satyricon, attributed to Petronius, c. 60 GE, s. 83-90, from Latin trans. Sarah Ruden. 2000. Satyricon. Indianapolis: Hackett Pub. Co. With contributions from the Rolling Stones “Yesterday’s Papers” and “(I Can’t Get No) Satisfaction.” Eumolpus means in Greek “skillful singer.”