Maximianus’s sixth-century elegiac poetry lacked the consolation of Boethius’s Consolation of Philosophy. Unlike Lady Philosophy taking Boethius home, Maximianus through a series of demoralizing sexual relationships aged into a bitter old man. Maximianus is the unsaved Boethius, boasting in his social status, exploiting the power of money, and living in memories. Because his achievements couldn’t secure for him stasis in incarnate life, Maximianus sought death. Without understanding, he achieved it. 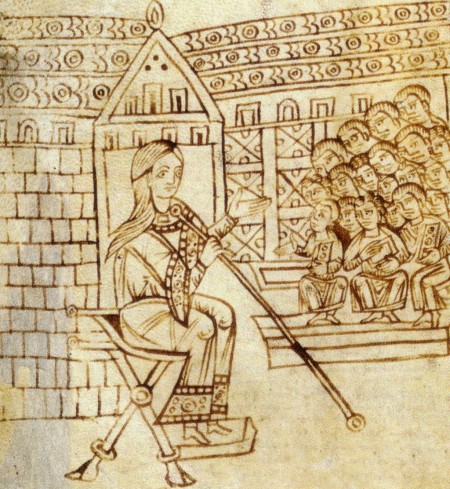 Maximianus’s most enduring intimate relationship failed from sameness and stasis. He had a long-term relationship with Lycoris, a lady as lovely as the Lycoris of Cornelius Gallus’s famous elegies. Maximianus explained:

Lo, lovely Lycoris too much loved by me,
our minds, our very lives one and the same,
though we had lived for many years united,
in loathing now has rejected my embrace
and seeks other younger men and loves.

Lack of polarity — minds and lives one and the same — kills sexual unions. Maximianus ignorantly pleaded with Lycoris:

I’m aged, but your hair’s as white as mine:
our equal age brings harmony of souls.

Equal age brings harmony only in the mind. Memories similarly are only assets in the mind:

If I cannot now, remember, once I could:
suffice it to please you that I pleased you before.

Suffice that didn’t. Virgil wisely observed that women are always varying and responding to circumstances, and that men must live with similar dynamism.[2] Maximianus begged for love to endure as memory:

Old reverence still remains for worn-out farmers,
the soldier loves what he saw in the veteran,
the rustic weeps for the bullock which has served him,
the rider honors the horse with whom he aged.

Reverence for an old farmer differs significantly from appreciation for being vigorously plowed. Life is in the performance:

Time has not spoiled me so of my earlier blooming:
look, I make verses and sing sweet ditties for you.

The fundamental performance is the word made flesh, not the flesh made word.

A thrill it was counting her curls as they shook with her motion,
and it was a thrill to see her dark hair on white skin.
Her nipples stood firmly forth, bewildering our eyes,
while her breasts you could squeeze in the hollow of your hand.
Ah, how her writhing loins stirred the spectator’s lust
and also the round plump thighs that joined her stomach beneath!

Maximianus understood his role narrowly and impersonally. In his first night with her, he declared that his penis had “paid its debt {sua solvit}.” However, under the weight of the inward gaze of internalized misandry, Maximianus’s penis stopped functioning. The girl made vigorous and valiant efforts to revive his vitality. Maximianus, however, remained sexually inert. Seeking to sooth his grief and hurt, the girl sang a tearful, praising lament:

Penis, the busy provider of festive days,
once the delight of my heart and a treasure to me,
what dirge can I moan for you, drowned in your tears?
What songs shall I sing for you worthy of such great merits?
You were accustomed to please me when I was lustful
and to divert my passion with fun and games.
You were my fondest guardian throughout the night,
the dear companion of sadness as well as joy.
You were the most faithful confidant of my secrets,
standing at guard with indulgent intimacy.
Where has your fervor gone, which would strike and please me?
Where is its crested and wound-producing head?
You’re certainly limp, no longer suffused with a blush,
pale, with your head held low, you’re certainly limp.
My blandishments and charming songs do nothing for you,
nor anything which could coax your passion avails.
Here I shall weep for you just as if you were dead.
Yes, it is dead because it lacked careful attention.

The Greek girl lavished Maximianus’s body with loving attention. His sexual death resulted from his own lack of attention to himself.

Unlike Maximianus himself, the Greek girl recognized the universal significance of Maximianus’s sexuality. In response to her tearful, praising lament for his limp penis, he laughed at her and suggested that she was sick with carnal yearning. As a strong, independent woman with a clear-reasoning mind, she denounced his narrow-minded betrayal:

She raged, “You’re wrong, you traitor, dead wrong!
I’m lamenting not a private, but universal chaos.
This generates the race of humans, the herds,
the birds, the beasts, whatever breathes in this world.
Without it, there is no coming-together of sexes.
Without it, the consummate joy of marriage is gone.
This it is that draws two minds to a single agreement
in order to transform into one body two souls.
With its loss a beautiful woman loses her beauty
and if he has lost it a man turns ugly as well.
If this sparkling seed is not sown in a shining soil,
it becomes but another deceptive and deadly weed.
Pure truthfulness, well-kept secrets whisper to you,
O truly our bountiful, beautiful, fruit-bearing blessing!
You are very happy, I say, suited for the happy,
lo, take and use the delights that are kindred to us!
…
You force the raging tigers to a mutual affection,
by you the lion is rendered both gentle and tame.
Your virtue is marvelous, so is your patience: the conquered
you love, and you often love to be conquered yourself.
When overcome you lie low. You then resume strength and vigor,
and once again you defeat and then are defeated.
Your anger is brief, your pity is great, joy recurring,
and whenever your power is lost your purpose remains”

Maximianus’s work negotiating international peace treaties was trivial relative to the sexual potential of his body.[6] He lost his purpose because he failed to understand.

Unhappy as though from a funeral, I rise:
although my part is dead, I live I think.

In Latin, this couplet has an end rhyme in the verbs for “rise” and “think.” The Latin etymology of mentula (“penis”) suggests “little mind.”

Be brave enough to follow the lead of the Greek girl. Speak the name of the penis. In the universal order, human life continues only with the rising penis.

With his edition of 1501, the young Venetian humanist Pomponius Gauricus established the division of Maximianus’s work into six elegies. In the surviving medieval manuscripts, Maximianus’s work appears continuous, with widely varying graphic marks indicating sections. Wasly (2011) pp. 113-4, inc. n. 9. I use the division of the poetry only for conventional referencing. My interpretation favors the unity of the elegies.

Nothing is known about Maximianus other than what is inferred from the poetry. The name Maximianus comes from within the text at 4.26. The author probably wrote in the mid-sixth century. The extent to which Maximianus’s elegiac poetry is autobiographical is controversial among scholars. Walker (1689), the first published English translation, offers a realistic-biographical interpretation. Maximianus’s poetry is highly literary and intertextual, particularly with reference to Boethius’s Consolation of Philosophy and Ovid. On Maximianus’s intertextuality with Ovid, see especially Amores 3.7 and Uden & Fielding (2010). I refer to the narrator / author as Maximianus merely for ease of reference.

Perhaps some or all of another, closely related set of six anonymous poems are also by Maximianus. Barnish (1990) p. 16. When I refer to Maximianus’s elegiac poetry, I mean the six poems of the established Maximianus tradition.

Maximianus’s poetry was highly popular in late medieval Europe. It was used as a medieval school text. Lind (1988) p. 309.

[4] Maximianus, Elegies 5.86-104. The opening Latin word of address is mentula. Lind translates that with the disparaging term “pecker.” Above I substituted the objective term “penis.”

[5] Maximianus, Elegies 5.109-24, 145-52. The Latin for 5.110 is non fleo priuatum, set generale chaos. Lind has “I’m not lamenting a private, but general chaos.” Above I’ve clarified the position of the negative and replaced “general” with “universal” to bring out the cosmic, generative connotation. Lind’s 5.111 begins “This member …”  The Latin has only haec (this). That’s what I’ve used above.

[6] Insightfully directing attention to the “Ode to Mentula” (5.109-53), Tandy (2015) interprets it as carrying the universal meaning that the contemporary Roman world is “frustrated, old, and dying.” From a Christian perspective, the personal and the universal are intimately connected. Just as in Boethius’s Consolation of Philosophy, Christian understanding in Maximianus’s elegiac poetry is subtle and fundamental.

[7] Maximianus, Elegies 3.47-8, my literal translation. Lind has “lone investigator of the universe.” The above paragraph describes the plot of elegy three. Mitchell (2003), p. 379, observes that elegy three is “on any reckoning potentially rich with irony at the expense of Boethius.”

[8] Elegy 3 ends with Maximianus leaving Boethius to live a sullen life of chastity. Elegy 5 ends with the Greek girl leaving Maximianus in sorrow. In the apt phrase of Wasyl (2011), Maximianus offers elegy without love. That’s no consolation.

Such is every pleasure
goading those enjoying it,
and like swarming bees
that have poured out their pleasing honey,
it flees, and strikes our hearts
with a too lasting sting.

Latin text and English translation from Stuart, Rand & Tester (1973). Those words of Lady Philosophy plausible refer to Boethius’s activities with the “cute little theater whores {scenicae meretriculae}” of 1.1. Lady Philosophy and her muses seek to bring Boethius to a truer and happier loving union. Id., p. 457, emphasizes in Maximianus “ongoing conflict between the will of the flesh and the will of the mind.” Boethius’s Consolation of Philosophy ends that conflict.

The Greek girl is much more forward than Lady Philosophy. Wasyl (2011) perceptively observes:

She {the Greek girl} focuses precisely on the problem of sex, rejecting the asexual or anti-sexual vision of the world. What she emphasizes is the creative power of mentula … and – which sounds particularly worthy of note – in human beings, the natural correlation between the body, epitomized, so to speak, by the phallus, and the mind. These two elements, the woman seems to warn, must be seen as complementary.

Unhappy as though from a funeral I arise:
Although my member is dead I shall live in my art.

I rise unhappily, as it were from my lamented funeral rites:
though dead in this part, I think that I live on.

Id. alternatively translates the last line as “Although my member is dead, I think I live on.” My translation above tries to preserve the subtlety of Maximianus’s poetry, particularly the resonances of the end-rhymed verbs “rise” and “think” in relation to Maximianus’s obliquely specified mentula / parte.

Tandy, Sean. 2015. “The ‘Ode to Mentula’ and the Interpretation of Maximianus’ Opus.” Presentation at the 111th Meeting of  Classical Association of the Middle West and South (CAMWS), Boulder, CO, March 25-28.

Walker, Hovenden, trans. 1689. Maximianus. The Impotent lover: accurately described in six elegies upon old age; with the old doting letcher’s resentments on the past pleasures and vigorous performances of youth. Made English from the Latin of Cn. Cornelius Gallus. By H. Walker, Gent. London: Printed for B. Crayle at the Peacock and Bible at the West end of St. Paul’s Church.