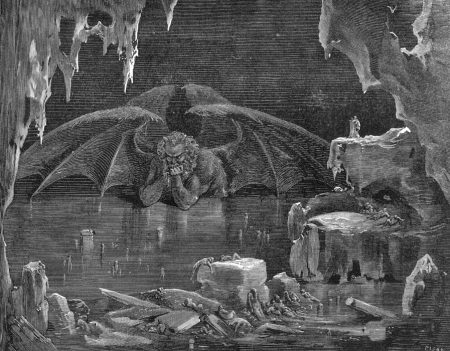 In the last canto of Dante’s Inferno, in the sinkhole of Hell, Virgil told Dante to behold Satan. Dante wrote:

How faint I then became, how turned to ice,
Reader, ask not; I will not write it down,
for any words I used would not suffice.
I did not die, did not remain alive.
Think for yourself, if wisdom buds in you,
what I became, deprived of life and death.

Dante in this canto subsequently described Satan as “the emperor of the reign of misery.” That’s easy enough to understand, but what is Dante saying about his own condition? An eminent Dante scholar observed:

The last verse of this seventh and last address to the reader in Inferno is treated by most commentators as a triviality, i.e., Dante assures the reader that he was indeed half-dead (as he has already said). See, for example, {a scholarly commentary states}: “The expression simply translates… that simple and banal phrase… in Italian, mezzo morto {half dead}.” Does Dante need to ask us to exercise our wits, if we have these, in order to understand that? The portentousness of his declaration that he cannot write what he became because words would fail him cannot be squared with such an interpretation, words for which would fail no one. Few, however, have come forward with more vital readings. [2]

Some scholars have provided abstract theological explanations. A lengthy scholarly analysis, published in 2002, interpreted the passage as describing “a parodic moment of mystical perception.” A better interpretation centers of the greatest sin of men. In a personal encounter with Satan-Lucifer-Leviathan, Dante apprehended the prideful quest for glory of Alexander the Great and of many other ordinary men like Dante himself. As Virgil advised, Dante must arm himself with fortitude to fight against that false ideal of virtue in gynocentric society.[3]

The interpretive key to Dante’s difficult text is the Alexandreis, a widely read Latin epic that Walter of Châtillon wrote about 1180. In Book 10 of that epic, Nature descended to the underworld. There she saw personifications of sins being punished in contrapasso:

Lust, submerged in burning slime, writhes
with flames that fully consume her genitals to the core.
Drunkenness is nauseated. Lavish gluttony licks
her own limbs and like a beggar by bites consumes them.

Stirring the flames of death in the Underworld was Leviathan, a figure of Satan-Lucifer. Nature brought to Leviathan “common complaints of humans and gods {communes hominumque deumque querelas}: Alexander the Great was conquering all the world. He even planned to besiege Paradise and the Underworld. Nature urged the serpent to “avenge our common plague {communem nobis ulciscere pestem}. She goaded his pride:

What praise is yours, serpent, what glory is yours
for expelling the first man if such a venerable garden
is yielded to Alexander?

Leviathan loudly proclaimed that he would help Nature and ensure that their mutual foe Alexander was swallowed in infernal darkness. Leviathan’s pride was thus matched against Alexander’s quest for glory.[5]

The shared terrain of that contest was the circumstance that Dante perceived. The Alexandreis depicted Dante’s paradoxical condition:

Tortured agony of unheard of death, that death
that is unable to die. For he whose deadened life
has been sinful, here he shall always live
the punishment of death, so that he who never
ceased to sin, may not know the end of his dying.
Numbed by ice and snow, from coldness he passes
to burning coals. O pitiable punishment! Always
and never he dies who suffers in Avernus’s prison.

“The standards of the king of Hell advance
toward us, and therefore look ahead and see,”
my Teacher said, “if you can make him out.”

The standards of the king of Hell were huge wings like those of bats. These wings waved beneath each of the three faces of Satan. Each mouth of that satanic trinity was chewing on a betrayer’s body. The great warrior-king Alexander relentlessly pursued Darius’s betrayer. Alexander and Satan-Lucifer-Leviathan are corresponding figures in the human world and in the Underworld. They fought for their own glory. From a Christian perspective, Jesus is a king who acted much differently:

The standards of the king advance
the mystery of the cross shines forth,
whereby the founder of our flesh
in flesh upon a gibbet hung.
…
All hail, O altar; victim, hail,
for sake of his passion’s great fame,
by which our Life endured his death,
and by his death restored our life.

The standards of the king advance. At the core of the world, Dante perceived Alexander the Great and eternal death. Dante soon reversed his trajectory to rise toward eternal life. You can, too.

The full text of the Commedia, Robert Hollander’s scholarly English translation, and a vast array of resources for thinking about the work are freely available online at the outstanding Princeton Dante Project. Dante completed the Commedia about 1320.

[5] Alexander the Great sought immortality. The oracle of Ammon to Alexander declared:

If you wish to bloom for ever in incorruptible youth,
Found the city rich in fame opposite the isle of Proteus

Alexander Romance 1.33, from Greek trans. Stoneman (1991) p. 65. Alexander founded the city of Alexandria and built a Grand Altar on a hill near it. There Alexander sacrificed and prayed to the god Sarapis. When Alexander asked about his death, the god gave a lengthy reply that included, in some manuscripts, paradoxical lines on death:

Dying but not dying, you shall come to me.
…
You shall live in it
For all time, dead and yet not dead.
The city you have built shall be your tomb.

Cross so faithful, tree of all trees
glorious, having no peer;
such a tree no forest brought forth
with such blossom, leaf, and bud;
sweet the wood, which with sweet nails
its sweet burden undergoes.

Barolini (2015) highlights the importance of transition in Canto 34:

The association of Satan-Lucifer and Alexander the Great competing to seize the terrain of eternal death further underscores Dante’s transition.

[image] Lucifer in the ninth circle of Hell in Dante’s Inferno. Gustave Doré, book illustration, made between 1861 and 1868. Thanks to Wikimedia Commons.