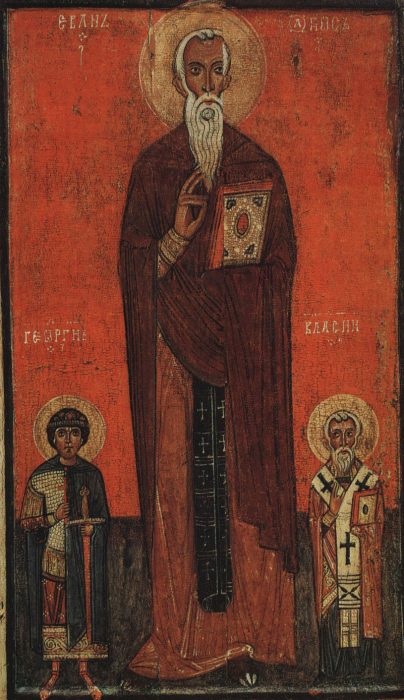 Living in the Sinai desert in seventh-century Egypt, John Climacus was a monk writing for monks, a man writing for men. John recounted a story he had heard:

There was a man who, having looked on a body of great beauty, at once gave praise to its Creator and after one look was stirred to love God and to weep copiously, so that it was marvelous how something that could have brought low one person managed to be the cause of a heavenly crown for another. And if such a man feels and behaves in similar fashion on similar occasions, then he has already risen to immortality before the general resurrection. [1]

That’s the story of Bishop Nonnus gazing upon the semi-naked actress-dancer Pelagia as she paraded past him. John endorsed that story with a parallel:

The same guideline ought to direct us when when we sing songs and hymns, for the lovers of God are moved to holy joy, divine love, and tears by songs both worldly and spiritual, just as lovers of pleasure are moved to the opposite.

Worldly love and divine love are opposite poles, yet John perceived that they have a common pattern. John explained:

Someone truly in love keeps before his mind’s eye the face of the beloved and embraces it there tenderly. Even during sleep the longing continues unappeased, and he murmurs to his beloved. That is how it is for the body. And that is how it is for the spirit. A man wounded by love had this to say about himself — and it really amazes me — “I sleep (because nature commands this) but my heart is awake because of the abundance of my love.” [2]

The man wounded by love was the great King Solomon in the Song of Songs, the wonderful biblical poem of natural love. Divine love expresses the perfected pattern of natural, worldly love. That’s the sense in which divine love overcomes worldly love.[3] About three centuries after John wrote, Symeon the New Theologian poetically and evocatively expressed John’s insight.

We should strive in all possible ways neither to see nor to hear of that fruit we have vowed never to taste. It amazes me to think we could imagine ourselves to be stronger than the prophet David, something quite impossible indeed. [4]

John perceived in the dominant sexual division of labor and reward the providence of God:

The great concern of the good Lord for us is shown by the fact that shyness acts as a curb on the shamelessness of women. For if the woman chased the man, no flesh would be saved.

John’s belief might help to explain the vibrant and dynamic sex lives of many homosexual men. But for heterosexual persons, the burden of chasing is allocated more complexly. Women in today’s decaying democracies aren’t generally shy. However, even low sexual-status women shamelessly chase only men at the top of the sexual-status hierarchy. One result is acute sexual inequality: a small share of men have abundant sexual opportunities, and many men suffer total sexual impoverishment. Another result is that many men, even given their propensity to sexual sin, have relatively good opportunities to live as monks and to cultivate divine love. Many men today should consider whether they should join with John Climacus in acknowledging “the great concern of the good Lord for us.”

All demons try to darken our minds so that they may then suggest to us what they want us to do, and so long as the mind stays awake we will not be robbed of our treasure. But the demon of fornication tries harder than all the others. … it urges and inclines us in the presence of other people to do things that only the mad would think of.

Men and women should not be passive in the face of the demon of fornication and the criminalization of men seducing women. Men have reason to hope that God may forgive them — yes, even men — for fornication. Yet women and men keeping their minds awake and striving to understand truly is a better way.

With the exception of the Bible and the {liturgical} service books, there is no work in Eastern Christendom that has been studied, copied and translated more often than The Ladder of Divine Ascent by St. John Climacus. Every Lent in Orthodox monasteries is is appointed to be read aloud in church or in the refectory, so that some monks will have listened to it as much as fifty or sixty times in the course of their life.

[4] Ladder of Divine Ascent, from Step 15, trans. Luidhéid & Russell (1982) p. 180. The subsequent three quotes are from id. pp. 181, 185. David committed adultery with Bathsheba. 2 Samuel 11. Medieval literature frequently reminded men that they should not regard themselves as stronger than the prophet and king David, or stronger than Samson, Solomon, Uriah, Naboth, or Joseph. With the intensification of gynocentrism, literature recognizing men’s weakness relative to women has been more strongly repressed.

[image] Icon of Saint John Climacus, with Saint George (on left) and Saint Blaise (on right). Made in second half of the thirteenth century. Preserved under accession number ДРЖ-2774 in the State Russian Museum (St. Petersburg, Russia). Via Wikimedia Commons.