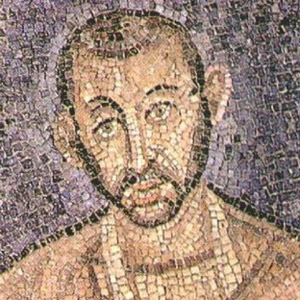 Redeemer of the Gentiles, come;
show forth the birth from virgin’s womb;
let every age show wonderment;
such birth is fitting for our God.

Not issuing from husband’s seed,
but from the Spirit’s mystic breath,
God’s Word was fashioned into flesh,
and thrived as fruit of her womb.

The virgin’s womb begins to swell;
her chaste enclosure remains intact:
the banners of her virtues gleam;
God in his temple lives and stirs.

From wedding-chamber he comes forth,
from the royal court of chastity,
as giant of his twin natures,
eager to hasten on his way.

Why is birth from a woman who never had sex with a man fitting for God? Ambrose explains that God’s mystic breath did the work of a husband’s semen. Carrying forward the figure of displaced, near-divine masculine sexuality, Ambrose implicitly contrasts the swelling of the womb with the swelling of a man’s penis. The later commonly penetrates a beloved woman’s vagina, but Ambrose explicitly elaborates that “the chaste enclosure remains intact.” Abstractly celebrating the bodily reality of a woman’s genitals late in a pregnancy, Ambrose declares, “the banners of her virtue gleam.” The subsequent stanza associates God’s temple with a wedding chamber, again proclaims the mother’s chastity, and declares Jesus “a giant of his twin natures.” Given the bodily figuration of these four stanzas, that phrase plausibly carries the punning meaning, “a giant of testicular substance.”[2] The virgin mother set forth from her womb a wonderfully masculine son.

Translators seem to have lacked the good faith to read Ambrose’s hymn frankly. Bodily figuration is prevalent in Hebrew scripture, and the Hebrew psalms were the primary hymns of the nascent Christian church. Yet an influential mid-nineteenth-century British translation of Ambrose’s hymn rendered the bodily “not issuing from husband’s seed” as “with virgin honour all unstained.” A mid-nineteenth-century American translation is “Of the virgin undefiled!”[3] A man having licit, loving sex with a woman neither stains her nor defiles her. Womb, flesh, swelling, gleaming intact banners of the enclosure — all these are lost in lofty, pious abstractions of prominent English translations. They provide words not brought to life in the flesh.

Other early Christian hymns also show appreciation for men’s sexuality. A hymn entitled “O Christ, redeemer of all {Christe, redemptor omnium}” recognized both that Jesus was born of a woman who never had sex with a man and that Jesus was a fully masculine man:

Remember, our salvation’s author,
that long ago you took the form,
out of an untasted young woman,
of our own body, and were born.

Early Christian men understood, as all men should, that our bodies, our selves, was the form that God chose to be. Toxic masculinity is a demonic claim. Medieval literature described husbands’ sexual obligation to their wives as having life-saving importance. An ancient Christian hymn “O Jesus, our redemption {Iesu, nostra redemptio}” alluded to the salvific form of men’s sexuality:

The burning enclosure you penetrated,
your captives you redeemed,
victor in noble triumph,
on the Father’s right you sit.

While men should be appreciated in their romantic simplicity, men, like women, can become sexually corrupt. The early Christian hymn “Jesus, you are the virgins’ crown {Iesu, corona virginum}” shows poignant masculine self-consciousness. It includes the masculine fantasy of being surrounded and adored by young, devoted women:

You who among the lilies feast,
enclosed by bands of virgins there,
a bridegroom handsome in your fame,
and rendering prizes to your brides.

Wherever you advance,
the virgins follow you and race,
singing your praises, in your wake,
and make their sweet hymns to resound.

Those praying the hymn then ask for greater vision and recognize the risk of becoming corrupt in love:

We pray you now, more generously
give added vision to our minds,
to have no truck with any wounds
inflicted by corruption’s dart.

Corruption’s dart alludes to the arrow of the traditional Greco-Roman god Cupid. Paul of Tarsus explicitly denounced sexual failings among Christians. The goodness of men’s sexuality doesn’t prevent it from being used wrongly.

Christians have joyfully sung hymns since the birth of Christ. The hymns above are included in the Roman Breviary {Breviarium Romanum} and the Liturgy of the Hours {Liturgia Horarum} — books that church leaders and devoted faithful have long used for daily prayer.[8] With their frank appreciation for men’s sexuality, these hymns can guide all men and women to wonderful singing.

Celestial grace does enter in
the enclosed belly of the girl;
the girl’s womb as burden bears
such mysteries are she knew not.

Directly is the dwelling of
her chaste bosom made God’s temple;
untouched and not knowing men,
she by the word a son conceived.

“Away from sunrise’s hinge {A solis ortus cardine},” stanzas 3-4, Latin text and English translation (modified slightly) from Walsh (2012) pp. 86-7. Walsh translated “intacta nesciens virum” as “untouched and innocent of men.” Men should not be essentially associated with guilt.

[3] The mid-nineteenth-century British translator is John Mason Neale. The American translator is William M. Reynolds. The Clerk of Oxford provides both translations.

[4] “Christe, redemptor omnium,” stanza 3, Latin text and English trans. (modified) from Walsh (2012) pp. 170-1. This sixth-century hymn has long been song at Vespers on Christmas Day. Id. p. 446. This hymn and the subsequent two were part of the New Hymnal. That book of Christian liturgical hymns probably originated in tenth-century France. Id. p. xii.

Walsh exchanged the order of the third and fourth verses in translation. That seems to me to downplay the importance of Jesus being incarnate like other men. For “ex illibata virgine,” Walsh translated “out of a virgin without stain.” The Latin illibata is rooted in libatus, which can mean a drink poured out in honor of god or gods. A man having licit, loving sex with a woman doesn’t stain her.

[5] “O Jesus, our redemption {Iesu, nostra redemptio},” stanza 3,  Latin text and English trans. (modified) from Walsh (2012) pp. 178-9. The revised Roman Breviary has this hymn at First Vespers on Ascension Thursday. Id. p. 448. The first line of this stanza Walsh translated as “Hell’s gate you penetrated.” My translation, which is more literal, helps to bring out the inter-textuality with Tertullian’s On the Apparel of Women. The stanza refers most directly to the Harrowing of Hell. See Matthew 27:52-4.

[6] In medieval European thought and poetry, the burning bush was associated with Mary’s womb: “This {the burning bush not consumed with flames} prefigured the blessed Virgin, whom the fire of the Holy Ghost illuminated with offspring, yet defiled not with the flame of concupiscence.” Honorius Augustodunensis, Speculum ecclesiae, quoted in Raby (1953) p. 369.

Adam of Saint-Victor perceptively connected the burning bush with moistening:

The dew descends over the fleece,
and the flame glows in the bush,
yet neither is harmed.
It was Christ assuming the flesh,
yet not consuming
your purity {Mary’s purity} when he was born.

[7] “Jesus, you are the virgins’ crown {Iesu, corona virginum},” stanzas 2-3, Latin text and English trans. (modified) from Walsh (2012) pp. 194-5. The subsequent quote is similarly from stanza 4 (the last stanza). Here’s the full Latin text. This hymn was composed for the Common of Virgins prayer day.

[8] The Magnificat and the Benedictus are Jewish hymns incorporated into Luke’s Gospel. Luke 1:46-55, 68-79. The Gospels of Mark and Matthew record a hymn sung in conjunction with the last supper with Jesus. Mark 14:26, Matthew 26:30.