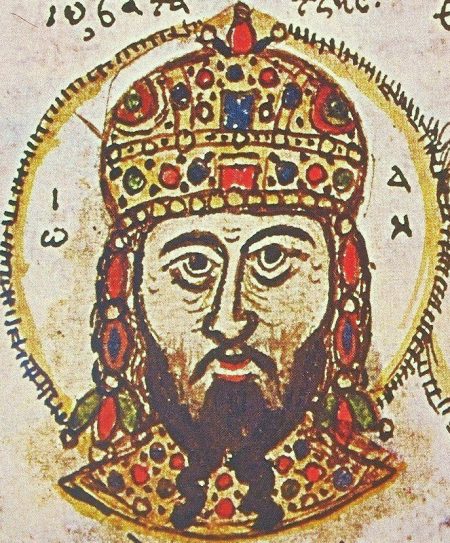 Men today endure institutionalized cuckolding through paternity establishment proceedings that systematically employ undue influence, mis-representation, and mis-service. Historically, some couples have responded to social support for cuckolding by establishing home-based cuckolding businesses. Other men have sought consolation in other ways. After his wife Empress Zoe fell in love with a charming young man named Michael, Byzantine Emperor Romanos III arranged for Michael to have official access to the imperial bedroom in exchange for Michael giving him foot massages in bed.

With his outstanding masculine beauty, Michael enchanted the Empress Zoe at first sight. Michael was:

a finely proportioned young man, with the fair bloom of youth in his face, as fresh as a flower, clear-eyed, and in very truth red-cheeked. [1]

Michael’s brother was a eunuch who had risen to high royal office. Through his eunuch-brother’s scheming, Michael appeared before the Emperor and Empress. The Empress Zoe was immediately smitten with him:

Her eyes burning with a fire as dazzling as the young man’s beauty, she at once fell victim to his charm, and from some mystic union between them she conceived a love for him. … Zoe could neither regard the young man with philosophic detachment, nor control her desires. Consequently, though in the past she had more than once shown her dislike for the eunuch, she now approached him frequently. Her conversations would begin with reference to some extraneous matter, and then, as if by way of digression, she would end with some remark about his brother. Let him be bold, she said, and visit her whenever he wished.

Like many men, Michael was slow to perceive romantic intrigue:

The young man, so far knowing nothing of the empress’s secret, supposed the invitation was due to her kindness of heart, and he accepted it, although in a modest and timorous fashion. This bashful reserve, however, only made him the more dazzling. His face, suffused with blushes, shone with a glorious colour. She eased his fear, smiling gently upon him and forgetting her usual grim arrogance. She hinted at love, tried to encourage him, and when she proceeded to give her beloved manifest opportunities to make love on his part, he set himself to answer her desire, not with any real confidence at first

Suddenly he threw his arms about her, kissing her and touching her hand and neck, as his brother had taught him he should do. She clung to him all the closer. Her kisses became more passionate, she truly loving him, he in no way desiring her (for she was past the age for love), but thinking in his heart of the glory that power would bring him. For this he was prepared to dare anything, and bear it with patience. [2]

He went on to have sex with her frequently. Lacking other good opportunities for advancement, many men will have sex with an old woman if she in return will greatly advance their careers. 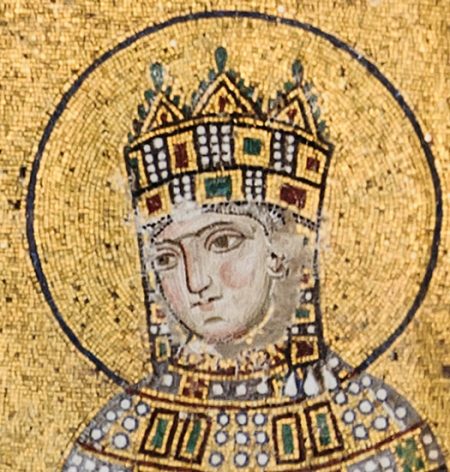 Zoe and Michael’s affair became widely known in the Byzantine palace. They made little effort to conceal it. Zoe dressed Michael in royal finery. Moreover, several courtiers discovered them sleeping together. Michael Psellos, a contemporary who later wrote a history of Byzantine emperors, observed:

That she should adorn him, as if he were some statue, cover him with gold, make him resplendent with rings and garments of woven gold cloth, I do not regard as anything remarkable, for what would an empress not provide for her beloved?

In private, Zoe went even further in her devotion to the young man:

she, unknown to the world, sometimes went so far as to seat him, turn by turn with herself, on the imperial throne, to put in his hand a sceptre; and on one occasion even deemed him worthy of a crown. Thereupon she would throw her arms about him all over again, calling him her “idol,” “the delight of her eyes,” “the flower of beauty,” “the comfort of her soul.”

Zoe not only was cuckolding her husband, she also was contemplating killing him and establishing her lover as the new emperor.

Emperor Romanos willfully disregarded the serious implications of his wife’s behavior. Everyone in the palace knew what was going on. Romanos, however, had extraordinarily weak perception of reality and a strong will not to believe:

Romanos was so completely blind. However, when the flash of the lightning and the roar of the thunder did eventually play round his eyes and deafen his ears, when he himself saw some things going on and heard of others, even then, as if he preferred to be blind and deaf, he closed his eyes again and refused to listen.

Romanos eventually faced his marital situation. He sought to make the best of it:

many a time when he was sleeping with the empress and she, clothed in some garment of purple, was waiting for him to lie down on their couch, he would call for Michael, bidding him come alone, and order him to touch and massage his feet. In fact, he made him servant of the bedchamber, and in order that the young man might do this office, deliberately abandoned his wife to him. [3]

Confronted with being cuckolded, no less than a Byzantine emperor acquiesced in exchange merely for foot massages in bed.

Subsequent events were personally and politically disastrous. Zoe apparently poisoned her husband, the Byzantine Emperor Romanos III. She then installed her lover Michael as the new Byzantine emperor. Shortly thereafter, Michael began to fear her and hate her. He ceased having sex with her and essentially imposed house arrest on her. As for the Byzantine Empire, “what had taken place was, in reality, the beginning of mighty disasters in the future.”[4]

If not to preserve their own dignity, men for the sake of their country should not accept foot massages in bed in exchange for being cuckolded.

This is a clear statement of misogynistic, if not patriarchal, attitudes.
Because of her age, Zoë is assumed to be “past it”.

Smythe (1992) p. 137. Disparagement of men’s heterosexuality can be traced back to the ancient Greeks. Claims of misogyny have developed much more recently to buttress the myth of patriarchy.

[images] (1) John III Doukas Vatatzes, Emperor of Nicaea (1222–1254), which had been part of Byzantium. Illumination from 15th-century manuscript of the history of John Zonaras, Mutinensis gr.122, f.294r, Biblioteca Estense Universitaria, Modena. Thanks to Wikimedia Commons. (2) Zoe, detail of The Empress Zoe mosaics (11th-century) in Hagia Sophia (Istanbul, Turkey). Thanks to Wikimedia Commons.

Smythe, Dion Clive. 1992. “Byzantine perceptions of the outsider in the eleventh and twelfth centuries: a method.” Ph.D. Thesis, University of St. Andrews, Scotland.