Acute anti-men bias in child custody, child support, and alimony rulings is a well-known but little discussed aspect of family courts today. Under a veneer of equal justice, anti-men sex discrimination is pervasive in practice. Appreciation for the distinction between formal, written law and actual, popular practice is crucial in considering the history of child-support and divorce rulings. With respect to actual divorce rulings, Mazaris’s Journey to Hades provides amazing insight into early fifteenth-century Byzantine divorce practice. 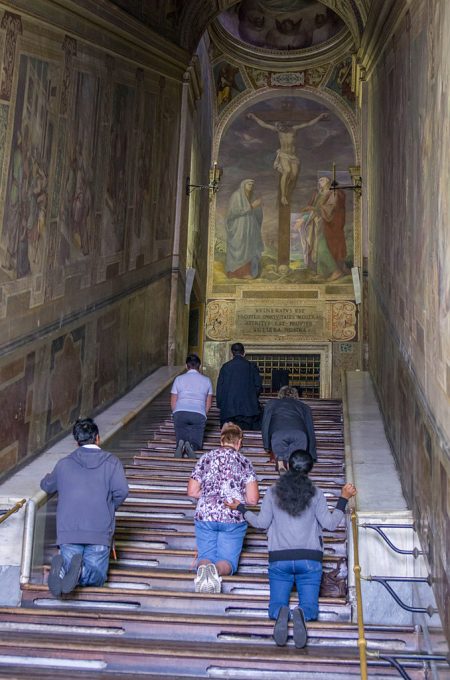 Early in the fifteenth century, Padiates was having sex with Malakenos’s wife in Constantinople. Padiates subsequently left for the island of Lemnos. Padiates alleged that he left because his assistant secretary Holobolos had squeezed him out of imperial favor. Holobolos was getting all the imperial writing assignments and had been appointed “sole and permanent secretary of public and confidential affairs.” Holobolos, bitter about his own bureaucratic rival “the scion of the evil Angels Philommataios,” told a different story about Padiates’s departure:

The wives’ taunt can be understood straightforwardly as a threat of divorce. Walking up the steps to the Patriarch’s Palace makes sense as a reference to being called to formal proceedings for a divorce. Because divorce rulings in practice commonly destroy husbands financially and deprive them of a close relationship with their children, wives today can taunt their husbands with the threat of divorce. That same dynamic apparently existed in early-fifteenth-century Byzantium. Men were better off enduring being cuckolds than objecting to their wives’ adulterous ways and getting divorced.

The cuckolded husband Malakenos taking a stand at the top of the stairs may point to further, less well-known aspects of family law. Padiates seems to have feared that the husband he was cuckolding would seek a divorce to punish him. As a result of a divorce, Padiates might find himself pressured to marry the ex-wife. But the situation was probably worse than that. Under family law today, men lack the reproductive right to have sex without risking being legally forced into financial fatherhood. Moreover, a married man is financially responsible for any children that his wife might have during the course of their marriage, even if the children come from his wife’s adulterous affair. Byzantine family law probably worked similarly. By having sex with Malakenos’s wife, Padiates was acting prudently for a man who wanted only to have sex. If Malakenos divorced his wife, Padiates’s risk in having sex with her would go up considerably. He plausibly fled to Lemnos because he feared being pressured into marriage or being caught in forced financial fatherhood.

The “famous flight of stairs” having seventy-two steps is a unique, late reference to an ancient structure in Constantinople. An eighth-century text on the monuments of Constantinople refers “seventy-two steps” leading from a “golden-roofed” basilica to the church of the Mother of God at Chalkoprateia. While this stairway isn’t described as famous, it certainly had a well-known position on the path of imperial and ecclesiastical processions.[2]

Associating a well-known stairway with adultery may have gained rhetorical force in relation to a stairway now known as the Scala Sancta. According to Christian tradition, Saint Helena, the mother of the early fourth-century Roman Emperor Constantine, had this stairway transported to Rome from Pontius Pilate’s palace in Jerusalem. Jesus is thought to have walked up its steps to be judged by Pilate and then crucified. The Scala Sancta would have made a poignant figure for wives calling their husbands to divorce proceedings. However, the Scala Sancta isn’t well documented prior to the sixteenth century. Perhaps Dante’s early fourteenth-century Comedia referred to it.[3] The entry in Liber Pontificalis for the ninth-century Pope Sergius II notes:

He performed another excellent work outside the doors of this venerable church {the original St. Peter’s Basilica in Rome}: the holy thresholds were formerly hidden from the people, and with great endeavour he rendered them visible to all when he constructed there from the foundations beautifully adorned arches; and these he magnificently adorned with various pictures.

Some believe that Liber Pontificalis here refers to the Scala Sancta. That’s questionable. Whether in early fourteenth-century Constantinople Holobolos might have parodied the Scala Sancta must be regarded as an open question.

Michael Psellos’s influential eleventh-century history of Byzantine emperors provides more convincing context for a famous stairway to divorce proceedings. Psellos’s history describes the early-eleventh-century Empress Zoë Porphyrogenita flagrantly cuckolding her husband the Emperor Romanos III. Romanos was highly reluctant to divorce Zoë. He even gave her lover free access to their bedchamber in return for foot massages in bed. Zoë later in life became extremely devoted to an icon of Jesus called the Antiphonetes (ἀντιφωνητής). In Zoë’s time, that icon was held in the church of the Mother of God at Chalkoprateia next to the stairway of seventy-two steps. Zoë frequently went to the church at Chalkoprateia to venerate the Antiphonetes icon. She also had a replica created for her own personal use:

Zoë made several prophecies with regard to the future from a study of this image. So, when she had met with some good fortune, or when some trouble had befallen her, she would at once consult her image, in the one case to acknowledge her gratitude, in the other to beg its favour. I myself have often seen her, in moments of great distress, clasp the sacred object in her hands, contemplate it, talk to it as though it were indeed alive, and address it with one sweet term of endearment after another. Then at other times I have seen her lying on the ground, her tears bathing the earth, while she beat her breasts over and over again, tearing at them with her hands. If she saw the image turn pale, she would go away crestfallen, but if it took on a fiery red colour, its halo lustrous with a beautiful radiant light, she would lose no time in telling the emperor and prophesying what the future was to bring forth. [5]

According to Psellos’s history, Zoë died at age seventy-two. With her well-documented connection to the seventy-two steps, her flagrantly cuckolding her husband, and her emotional intimacy with an icon, Zoë provides a plausible origin for the association of the stairway with adultery.  Underscoring Zoë’s connection to the Chalkoprateia, after describing why Padiates fled to Lemnos, Holobolos turned to his friend Mazaris and said:

Don’t you realize that this so-called son of his is in fact a bastard of Rhiphas Chalkeopoulos? [6]

The one who cuckolds being cuckolded is a form of the well-known folk motif “trickster tricked.” The famous stairway upon which adulterous wives taunt their husbands seems to be a literary figure built upon a real stairway in Constantinople and Michael’s Psellos’s historical account of the Empress Zoë.

Much more important than the source of the literary figure is its enduring policy insights. Men historically have been punished more severely for adultery than women have. Acute anti-men bias in child support, child custody, and alimony rulings makes for unusually cruel punishment for husbands whose wives commit adultery and then divorce their husbands. Those husbands climb on their knees to family court crucifixion.

[1] Mazaris’s Journey to Hades, from Greek trans. Seminar (1975) p. 35. I’ve made a couple of minor, non-substantial changes for ease of reading. The two prior quotes “sole and permanent secretary of public and confidential affairs” and “the scion of the evil Angels Philommataios” are from id. pp. 33 and 27, respectively.

[2] Parastaseis syntomoi chronikai 37 (seventy-two steps), from Greek trans. Cameron & Herrin (1984) p. 99. Zosimus, a historian writing about 500 GC, may have referred to them. Zosimus, Historia Nova 2.31.2, discussed in Mango (1959) p. 44. On imperial and ecclesiastical processions in Constantinople, Berger (2001). The number seventy-two has significant references in Jewish mystical literature. According to the Zohar, Jacob’s ladder had seventy-two steps. On the Basilica, which wasn’t the Hagia Sophia, Mango (1959) pp. 48-51. On the location of the Patriarch’s Palace, Dark & Kostenec (2014).

Another stairway in Constantinople was “steps known as Topoi.” Parastaseis syntomoi chronikai 32, trans. Cameron & Herrin (1984) p. 95. See also Patria 2.27 (“steps know as <Topoi>”), from Greek trans. Berger (2013) p. 67. Patria 3.32 refers to topon (τοπον) in the context of clearing the site (topon) for the church of the Holy Mother of God at Chalkoprateia. Id. pp. 156-7 (text and translation), 310 (note). Topoi (τόποι) in ancient Greek literally means places or positions. However, the steps known as Topoi were not near the Chalkoprateia, but near the Constantinopolitan shore of the Bosphorus.

[3] Wilkins (1955), in relation to Dante, Paradiso XXI: 28-30. The excellent Princeton Dante Project unconvincingly but authoritatively declares that the “ladder” (scaleo) of Paradiso XXI: 29 is derived from the biblical Jacob’s ladder.

The first written testimonies to this renowned memory of the Passion {the Scala Sancta} are found in a passage from the Liber Pontificalis dating from the time of Sergius II (844-847) and in a Papal Bull issued by Pope Pascal II (1099-1119). It is also known that the stairs were originally placed in the complex of the Lateran Palaces (Patriarchium), the ancient seat of the Papacy.

Reportedly a person named “Soresino” in 1672 produced a bull of Paschal (Pascal) II, dated August 5, 1110, that declared that Pope Sergius II had placed the Scala Sancta before the portal of the Lateran Palace. Lea (1896) p. 458. Id. calls that bull a “somewhat audacious forgery.” Pope Pius VII, by a decree of the Sacred Congress of Indulgences on September 2, 1817, granted an indulgence of nine years for each step ascended on one’s knees. Leo XIII (1898) p. 156.

The Scala Sancta is a Latin phrase meaning Holy Stairway. An alternate, perhaps older Latin name is Scala Pilati (Stairway of {Pontius} Pilate). In Italian, the stairway is called the Scala Santa. The Oxford Dictionary of the Christian Church (third revised edition, 2005) describes the Scala Sancta:

A staircase of 28 Tyrian marble steps near the Lateran church at Rome. … At the top of the steps is the ‘Sancta Sanctorum’ chapel (1278), the only surviving piece of the old Lateran Palace.

For the sixteenth-century renovation that made the Scala Sancta famous, Witcombe (1985).

[5] Michael Psellos, Chronographia 6.66, from Greek trans. Sewter (1953) pp. 138-9. Zoë having died at age seventy-two is from Chronographia 6.160, id. p. 180. The Oxford Dictionary of Byzantium (ed. Kazhdan), s.v. Chalkoprateia, states that the icon Christ Antiphonetes was held in the church of the Holy Mother of God (Theotokos) at Chalkoprateia. That church also held “the worthy girdle and the robe of the holy Mother of God.” Patria 3.147, trans. Berger (2013) p. 203. Zoë reportedly founded a Church of Christ Antiphonetes in which she was buried. Oxford Dictionary of Byzantium, s.v. Christ Antiphonetes. For more on the icon Christ Antiphonetes, which probably differed from the Christ icon on the Chalke Gate (Christos Chalkitês), Mango (1959) pp. 142-8.

[6] Mazaris’s Journey to Hades, trans. Seminar (1975) p. 35. Chalko- means bronze. Chalkoprateia originally was the area of bronze shops. The Chalke or Chalke Gate was originally the main entrance to the vestibule of the Great Palace of Constantinople. It was south of the Hagia Sophia. See map of ancient Constantinople.

[image] (1) Persons ascending the Scala Sancta on their knees. Image thanks to Antoine Taveneaux and Wikimedia Commons. (2) Icon of Christ Antiphonetes. Made from green steatite in Greece, ca. 1350 or later. Held in Metropolitan Museum (New York), accession # 1979.217.

Dark, Ken R., and Jan Kostenec. 2014. “The patriarchal palace at Constantinople in the seventh century: locating the Thomaites and the Makron.” Jahrbuch Der Österreichischen Byzantinistik. 64: 33-40.

Lea, Henry Charles. 1896. A History of auricular confession and indulgences in the Latin Church. Philadelphia, Penn: Lea Brothers and C°.

Leo XIII, Pope. 1898 (1903). The new raccolta: or, Collection of prayers and good works, to which the sovereign pontiffs have attached holy indulgences. Philadelphia, PA: P.F. Cunningham.

Mango, Cyril A. 1959. The brazen house: a study of the vestibule of the Imperial Palace of Constantinople. København: Munksgaard in Komm.