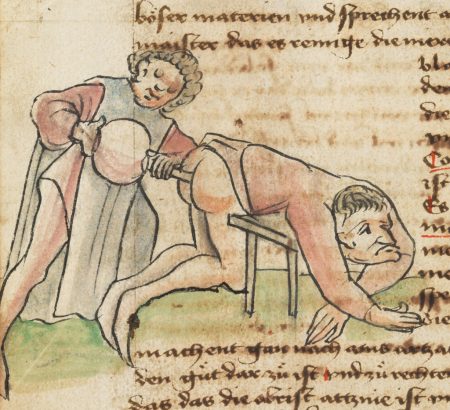 He was that fine, upright character Pepagomenos, who once instead of a remedy made up a poisonous drug and administered it to himself and to Phokidios, the drunken assistant secretary, now deceased, of the dead old dotard Eumarantus. He at once stopped the bleeding by applying the herb known as ox-eye. [1]

Pepagomenos then turned and recognized his old friend Mazaris, who himself was a close friend of the wounded man and had been with him at the time of the attack. Mazaris was also a doctor. Pepagomenos greeted and embraced Mazaris and then exclaimed:

How did you get into this state, my boy? Where have you come from, looking so shabby, limping, pale, weakened by exposure, your fingers and toes out of joint? What made you a pauper and a beggar, disreputable and disrespectable? How did it all happen to you? For the sake of our old friendship, tell me.

Doctors historically were associated with being sick and having pallid, sallow faces. Mazaris was a doctor particularly noted for treating gout. His wounded friend apparently didn’t trust Mazaris’s medical skills. As a doctor, Mazaris seemed unable to cure himself.[2]

In Mazaris’s Byzantine society, doctors were harshly disparaged. They were called “certified killers,” “professional poison-mongers,”  “banes to mankind,” and menaces to their patients.[3] Pepagomenos described some doctors who were eminent and well-connected among Byzantine elites:

one, the elder, is called Pepagomenos {sic}, but his nickname is Sauromates. He belongs to the class of certified killers, along with Onocentius, as he is called in good Latin, a sad case of brain damage; his brother and exact image Libistros; the deaf Malakes; Peter, like the Peter in Synesius, who is considered the scourge of Pentapolis; then, ranking above all these, Konones the hellhound, who administers hemlock for medicine, and Charsianites, who gently and without bloodshed helps his serious cases along on their way to Charon {death}. [4]

Don’t worry. You can set your mind at ease. Nothing of this kind will happen to them, so long as they remain single. When they get it into their head to marry, then you will see them in my condition and worse. I, for my part, as long as I lived alone, enjoyed a fair measure of dignity and respect, and also of wealth and other pleasant things, as you know. Unfortunately, right after my marriage my troubles began, because the bad, as somebody has said, is next-door to the good. And so I now look like this.

Occupational hardships are nothing compared to men’s sufferings in marriage. Scholars have disparaged and marginalized voices of men’s sexed protest throughout history. Those voices deserve serious consideration.

[1] Mazaris’s Journey to Hades, from Greek trans. Seminar (1975) p. 35. Subsequent references to Mazaris’s Journey to Hades are by page number in id. Subsequent quotes are from pp. 35-6 (How did you get into this state…), p. 39 (one, the elder, is called Pepagomenos…); 41 (Don’t worry…). I’ve made some minor, non-substantial changes to the translations for ease of reading.

[2] On doctors being sick and having sallow complexions, see note [11] in my post on physiognomy of skin color before the Enlightenment. On Mazaris treating grout, Mazaris’s Journey to Hades, p. 67.

[3] Mazaris’s Journey to Hades, pp. 39, 5, 67, 77. The text “possesses a clear subtext of satire against doctors.” Garland (2007) p. 199. Kazhdan argued that the social status of doctors in Byzantium declined after the seventh century and then began rising at the end of the tenth century. He observed that the twelfth-century Byzantine historian Nicetas Choniates “overtly differentiated the doctor and the poisoner” (Historia, 298.14). Kazhdan (1984) p. 51. I don’t find Kazhdan’s argument convincing. More importantly, persons have always desperately sought doctors and been frustrated with doctors’ costs and limitations.

[4] The name Onocentius has the Greek work for donkey (onos) substituted into the Latin name Innocentius (Innocent). The phrase “like the Peter in Synesius” refers to Synesius, Epistle 47:

Regard Peter also as the scorn of Pentapolis, a fellow who sets about breaking its laws without method, and for my part I detest the man who proceeds about a thing in that way.

From Greek trans. Augustine FitzGerald (1926), via Livius. Synesius, who lived from c. 373 to c. 414, was a bishop of Ptolemais in the Libyan Pentapolis. In ancient Greek myth, Charion is a ferryman who carries souls to the land of the dead.

[image] Patient receiving an enema. Illumination from iatromathematical housebook from the Southern German/Swiss region. Produced in the middle of the fifteenth century. From p. 120 in Cod. Sang. 760, held in Stiftsbibliothek (St. Gallen, Switzerland). Thanks to e-codices.

Kazhdan, Alexander. 1984. “The Image of the Medical Doctor in Byzantine Literature of the Tenth to Twelfth Centuries.” Dumbarton Oaks Papers. 38: 43-51.