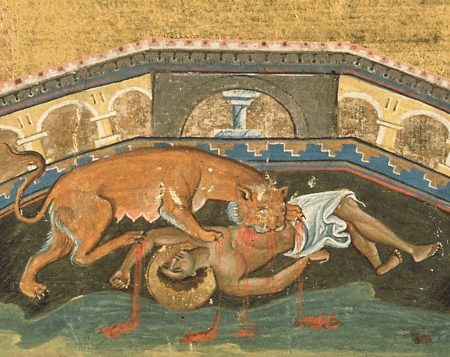 In fourteenth-century Constantinople, the eminent intellectual Nikephoros Gregoras wrote an eloquent letter in Greek to an unnamed friend. Gregoras’s friend had a beautiful wife. She began cuckolding him only a few days after their marriage. She apparently was also falsely accusing him of sexual improprieties. While expressing outrage and sympathy, Gregoras urged his friend to accept his marital fate as the natural order in marrying a beautiful woman.

Gregoras’s letter begins with a vague declaration, “I know it very well.” The letter then immediately shifts to intimate, second-personal address. “I know it very well” seems to refer to being cuckolded. Gregoras’s letter shows that he understands cuckolding through examples in classical literature. But his introductory declaration seems personal. It suggests that Gregoras too has been cuckolded.

Gregoras also refers to an unnamed “excellent man” who has informed him yesterday about the addressee’s situation. Gregoras praises the unnamed, excellent man with lofty epithets. That praise lacks motivation. Within the overall context of the letter, the unnamed excellent man plausibly is an alternative rhetorical figure for the addressee of the letter.[1] That alternate addressee re-enforces the the letter’s constructed contrast between the majesty of learning and the disgrace of being cuckolded.

Gregoras playfully chides his learned friend for betraying learning about women. Byzantine scholars knew that Phaedre falsely accused her stepson Hippolytus of raping her after he rebuffed her amorous advances. They knew that Euripides was wrongly tarred with hating women. They knew that the Athenian orator Lycurgus was wrongly impugned for wronging women when he forbid rich women to ride to Eluesis in coaches (carpenta) so as not to shame poor women who lacked coaches.[2] Recognizing Xanthippe’s domestic violence against Socrates enabled Byzantines to have a more truthful understanding of domestic violence than many persons have today. Misandry that went even to the extreme of androcide was never forgotten with remembrance of the Lemnian deeds. Most importantly, women’s great power to promote war was freely and openly recognized in recalling the horrors of the Trojan War.

That some men get cuckolded was no secret in Byzantium. Learned Byzantines knew that the yes-dearing Hephaistos, who at the behest of his wife Aphrodite dutifully made a shield for Achilles, was cuckolded by Ares. Zeus, who had deposed Chronus, the father of castration culture, avoided only through a cloud an affair between his jealous wife Hera and the King of the Lapiths Ixion. Zeus himself, taking the form of a swan, had sex with Leda, the wife of the Spartan King Tyndareus. And of course Philip of Macedonia, nominally the father of Alexander the Great, had been cuckolded by the Egyptian magician Ammon (Nectanebo), the true biological father of Alexander. In recognition of the serious public problem of false paternity beliefs, the great Byzantine leader Constantine the Great erected a statue of Aphrodite to help husbands learn whether they had been cuckolded.

Gregoras’s letter concludes with unconsoling wisdom. If a man wishes most easily to pass through the alternations of happiness and misfortune that pattern human life, he should either not marry or marry an unattractive woman. Most men would find the second option less attractive. As for his married friend being cuckolded, Gregoras advised him to endure his misfortune with courage and philosophy. By philosophy he seemed to mean classic stories of women wronging men.

Gregoras’s letter, in translation from the original fourteenth-century Byzantine Greek, is given in full below.[3] One of the most poignant, eloquent, and influential works of men’s sexed protest is the medieval Latin letter Dissuasio Valerii ad Rufinum. In that letter, Valerius attempts to dissuade his friend Rufinus from getting married. Gregoras’s letter to his married friend being cuckolded is a worthy complement to Dissuasio Valerii ad Rufinum.

Gregoras’s full letter to his married friend being cuckolded:

I know it very well. You understand, my dearest, the affection I have long had for you. You have been able, I believe, to guess what grief I have felt, needless to say, at the news of the misfortune which has just washed over you. I questioned yesterday on this subject that excellent man, “the springtime of eloquence, the joy of the learned, the dear, the amiable, the laudable man.” He told me everything in detail. What he informed me is that you have united yourself to a woman remarkable for her beauty as well as her birth, young, but of deplorable conduct. She has disgraced your bed a few days after your marriage. She was sober-minded, but her conduct today insults you, and worst of all, in spite of all this, she bad-mouths you. As the proverb says, those who wear horns deserve blows.

Hearing this story, I hid myself with shame, by Athena, by Hermes, by the Muses, and I wished to see the earth open under my feet. It is a disgrace, a shameful disgrace to your friends, to learning itself. What an unforeseen misfortune! What an insult! What outrage to the majesty of learning! What evil genius has pushed her to wish to behave against you thus? Do you not know, having heard them yourself, of so many stories, that a reasonable man, who knows how to be wise, doesn’t find agreeable a woman adorned with impudence? No single anchor could restrain her, as one restrains a boat. But the boat that she is breaks its moorings many times and seeks shelter in another port. Do you not know that Solomon says that three things shake the earth and that a fourth it cannot bear: that is a prostitute who meets an honest man or who, after her adventures, washes herself and say she hasn’t done anything extraordinary. Nothing is so inconstant as the mind of the unchaste woman, nothing is more inclined to weave insinuating calumnies and false accusations, and to turn back her own faults upon innocent men. If she has superior social-standing and birth, things that easily toss like dice the evidence on which accusations are based, then one must have the goodness of God and the depth of the sea to be cleansed of insults and slander from the tongue of the perverse one. Do you not know the attitude of Phaedre, the wife of Theseus, to the wise Hippolytus, and how much her calumnies have been stronger than the truth? Do you not know how much the learned Euripides, as well as the orator Lycurgus, suffered from the tales of women, said to be as acrid as smoke, as dirty as dust? Do not you know with what disturbances Xanthippe filled the house of Socrates? Are not the evils of Lemnos due to women? Is it not the same with the evils of the Trojan war?

What good is it to enumerate in detail, what is the use of telling a man who knows all these things? It was inevitable, it could be said; beauty doesn’t endure through time, free from jealousy. But I let myself be carried away unconsciously by the pain and I let myself be led to talk about things, somewhat beside my subject. I had to console a man gnawed by grief. I do the opposite, I think. I irritate his grief with what I tell him. But you’re a learned man. You know more than anyone else about consoling others who are in the same situation. You will undoubtedly apply the logical remedies suited to the present case. You remember, if the pain has not clouded your memory, that Hephaistos suffered this misfortune from Ares, Zeus from Ixion, the Spartan Tyndareus from the swan, Philip of Macedonia from the Egyptian Ammon. Your suffering therefore has nothing strange to the natural order. Misfortune generally follows happiness. There can be no existence without sorrow. If you personally wished to run the double course of life with the least possible difficulty, you would need to do one of two things: either do not marry, or do not marry a pretty woman so that you won’t have to share your wife with the whole world.

May I see you, a young married man, in good health, and enduring your misfortunes with as much courage as philosophy, so that I am not obliged to plait in your honor tragic chants instead of a wedding song.

[1] In the penultimate paragraph of his letter, Gregoras clearly refers to his friend in the third person as “a man gnawed by grief.”

[3] Nikephoros Gregoras, Letter 129 (written 1330-1340), original Greek with French translation in Giulland (1927) pp. 220-5. The above English translation is mine. A more recent Greek text for the letter is Letter 123 in Leone (1982) vol. 2, pp. 318-20. Garland (1996), p. 15, declares that Gregoras “is here conforming to the misogynistic outlook typical of Byzantine theology.” Littlewood (1999), p. 33 n. 67, describes the letter as “tongue in cheek.” Neither of those scholarly judgments seem to me to do justice to Gregoras’s letter or to the reality of men’s lives. For a general review of Gregora’s life, intellectual interests, and letters,  Manolova (2014) Part I. On the prior Byzantine tradition of letters of consolation, Littlewood (1999).

Littlewood, A. R. 1999. “The Byzantine Letter of Consolation in the Macedonian and Komnenian Periods.” Dumbarton Oaks Papers. 53: 19-41.

Manolova, Divna. 2014. Discourses of Science and Philosophy in the Letters of Nikephoros Gregoras. Ph.D. Thesis. Medieval Studies Department and the Doctoral School of History, Central European University of Budapest.