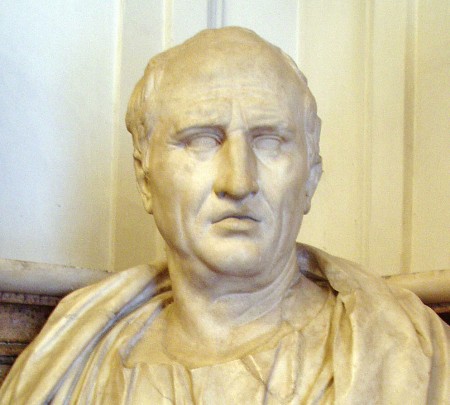 Within the Golden Age of Latin literature, Cicero was the preeminent orator and prose stylist. Cicero included within his masterly text on oratory a witticism about a husband, his friend, his friend’s wife, and suicide:

Other witticisms are those that suggest a joke that is not quite on the surface; to this group belongs the quip of the Sicilian to whom a friend was lamenting because, as he told him, his wife had hanged herself from a fig-tree, and who replied, “Do please let me have some cuttings from that tree of yours to plant.”

Fabianus, every girlfriend Lycoris has had, she’s buried them all. I hope she makes friends with my wife.

Later during the Roman Empire, another writer reported a Greek philosopher’s nasty quip:

Seeing some women hanged from an olive-tree, he said, “Would that every tree bore similar fruit.”

In the classical Greco-Roman world, men freely expressed their dissatisfaction with women and marriage in ways that are nearly unimaginable in our more repressive age. Juvenal’s Satire 6 is probably the most forceful and scintillating work of men’s sexed protest ever written. At a more mundane level, Roman men wrote graffiti declaring no further interest in having sex with women. Elite Roman men’s reluctance to marry was a matter of serious public concern. Today, even the ultimate expressive act of men committing suicide, which men do at a rate four times that for women, generates almost no public concern. 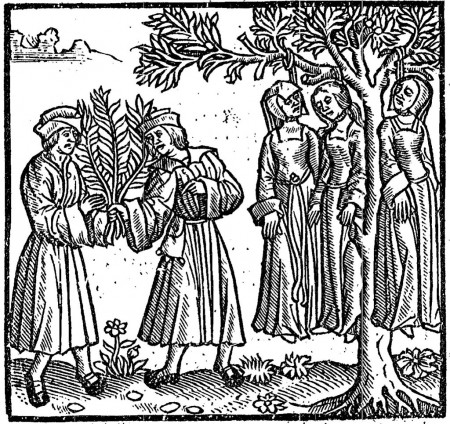 The husband’s suicide quip in Cicero’s text was characteristically amplified in its most widely distributed medieval version. That medieval version expanded the hanging to three successive wives:

Valerius tells us that a man named Peratinus one day burst into a flood of tears. Calling his son and his neighbors around him, Peratinus said, “Alas! Alas! I have now growing in my garden an unlucky tree, on which my first poor wife hung herself, then my second wife, and after that, my third wife. Have I not therefore cause for my wretchedness?” “Truly,” said one that was called Arrius, “I marvel that you should weep at such an unusual instance of good fortune! Give me, I pray of you, two or three sprigs of that tree. I will divide them with my neighbors. That will afford every man an opportunity of allowing his wife to hang herself.” And so he did.

European medieval culture celebrated men’s abject subordination to women in courtly love. Medieval fabliaux made fun of the physical abuse of men and men being cuckolded. Medieval men had legitimate reasons to engage in vehement verbal protests against the marital circumstances of their lives.[5] Yet from a medieval perspective, following the Christian way of the cross was far more important.

Related to this are remarks that depend on insinuation: when a man complained to Cicero that his wife had hanged herself from a fig tree, Cicero replied “I wish you would give me a slip of that tree to graft”; what is unsaid here is understood. Indeed, the whole principle of witty speech consists in expressing things in a way other than the direct and truthful one.

Plutarch recorded a version of the quip in which men seek suicide. Timon says to the men of Athens:

I have a small building lot, men of Athens, and a fig-tree is growing in it, from which many of my fellow citizens have already hanged themselves. Accordingly, as I intend to build a house there, I wanted to give public notice to that effect, in order that all of you who desire to do so may hang yourselves before the fig-tree is cut down.

[4] Gesta Romanorum Tale 33, “About boasting {De iactantia},” Latin text of Oesterley (1872), English trans. (modified significantly to follow the Latin) from Swan (1894) p. 66. The subsequent quote is similarly sourced. Gesta Romanorum was probably compiled at the end of the thirteenth century.

While Gesta Romanorum was a widely distributed work, the husband’s suicide quip was also known through other works, including Cicero’s De oratore itself. Walter Map’s influential Dissuasio Valerii ad Rufinum includes a version much like the one in Gesta Romanorum, but without the allegorization. Map’s essay is lovingly addressed from Valerius to his friend Rufinus, who is planning to marry. Valerius appends to the quip an expression of concern:

Friend, I am afraid lest you should need to beg cuttings from that tree at a time when they cannot be found.

A early sixteenth-century French version of Gesta Romanorum, Le Violier des histoires romaines, records more extensively the spiritual allegorization of the suicide quip. It describes the man “who is married to the world.” Through the grace of God and penance, he overcomes his three sins (wives). Cupidity is hung (overcome) with the cord of almsgiving, sensuality is hung with the cord of chastity and fasting, and pride, the devil-woman, is hung with the cord of humility. Brunet (1858) pp. 88-9. Swan significantly abbreviated the allegorization. Swan (1894) p. 67.

[5] Literature of men’s sexed protest historically has been misandristically misread. That tendency is evident in the historical reception of the classical suicide quips. Erasmus recounted the suicide quips of Cicero and Diogenes. He added a comment that Diogenes was “implying jokingly that he hated his wife.” The sixteenth-century Domenichi joke collection recorded Cicero’s quip and added the marginal note Empio e inhumano (“impious and inhumane”). Bowen (1998) pp. 426-7. It apparently wasn’t recorded how the author of that marginal note felt about pervasive violence against men and the large lifespan shortfall of medieval men relative to medieval women. But surely the United Nation’s current approach to evaluating gender inequality in life expectancy should today be noted as impious and inhumane.

Swan, Charles, trans. and Wynnard Hooper, ed. 1894. Gesta Romanorum; or, Entertaining moral stories; invented by the monks as a fireside recreation, and commonly applied in their discourses from the pulpit: whence the most celebrated of our own poets and others, from the earliest times, have extracted their plots. London: George Bell & Sons.