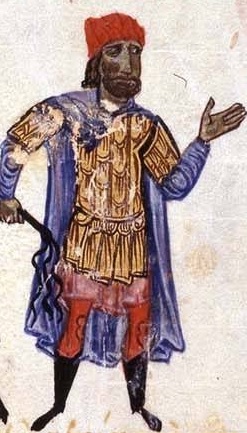 With respect to men’s personal disposability, Kekaumenos was a traditionalist, but brave enough to express pragmatic qualifications. He considered men to be naturally persons who fight and die for their society. He advised his sons:

When you are enlisted as a soldier, play the man in battle, even if you are going to die. Remember that it is for this reason that you were enlisted, and that no-one is immortal.

Don’t fear death, if you are going to meet it on behalf of your country and the emperor; rather fear a shameful and blameworthy life. [2]

Yet to each of those exhortations Kekaumenos attached a pragmatic qualification:

Avoid petty warfare; for if you are wounded, you will die, and after death you will be a disgrace.

Only don’t hurl yourself into danger pointlessly and without premeditation; for this sort of thing is to be blamed.

These qualifications show Kekaumenos more concerned about a man’s social status than his death or bodily injury. However, showing any concern for gender-distinctive harm to men is quite unusual.

you should protect yourself from your friends more than from your enemies. …

To have as a friend a snake and a bad man is one and the same thing; from the mouths of both of them comes deadly poison. I never liked to have a companion, nor have I ever lived with a man who was my equal, unless out of necessity.

For when trouble has come, and the companion has also been involved in it, partly or entirely, he will blame his companion. He will shake his head and, even if he doesn’t speak openly, he will say, in his heart: ‘My friendship with him hasn’t been good for me. See, through him I am caught in difficulties’. His companion, seeing him, grieves in his heart, suffering affliction from both sources — from his companion’s grumbling and from his own misfortunes. In small mishaps a friend will be found, but in great and enduring misfortune, let no-one deceive you — there will be no friend.

The man you live with, when you want to eat, will perhaps have no appetite, or indeed, vice-versa. If you wish to sleep, he will be awake. You perhaps wish to have lunch with a friend of yours, and he will grumble. In short, one person has one rational desire, and another has another.

It is dangerous to quarrel with women, but more dangerous to make friends with them. You will be harmed by doing both. [3]

Kekaumenos understood that women present some gender-specific dangers to men:

Guard yourself whenever you converse with a woman, even if she seems to be one of the respectable ones. Don’t become familiar with her, for you will not escape her snares. Your eyes will be drawn away, and your heart will be stirred, and you will be beside yourself. You will be attacked from three sides: by the Devil, by her appearance and her words, and by human nature. It is a great thing to overcome these.

Yet he also recognized the great value of a good woman to a man:

The man who has buried his wife has lost the half — or even more — of his life as well, if she is a good woman.

In contrast to misleading scholarly claims, men more readily hate other men than hate women. Kekaumenos warned men against their natural tendency to regard women as harmless enemies and good friends.

Kekaumenos had keen understanding of how men sexually attract women. He advised his sons:

If you have a friend in another place, and he comes through the city where you live, don’t let him lodge in your house. Let him lodge elsewhere. Send him the things he needs. He will that way receive you better. But if he lodges in your house, hear how many things you will have to complain about. To begin with, your wife and your daughters and your daughters-in-law are not free to go out of their room and make necessary arrangements in your house. If there is pressing need for them to come out, your friend will exclaim and fasten his eye on them. Even if you are standing with him, he will seem to you to lower his head, but he will be watching carefully how they walk, and turn, their hips, their glance, and, in short, everything from top to toe. When he is alone with his own men, he will imitate them and laugh. … If he should find a chance, he will make gestures of love to your wife. He will look on her with licentious eyes. If he can, he will even defile her. If he cannot, he will go out and make boasts that should not be made. Even if he himself doesn’t say it, your enemy will shout out in battle {15 characters missing; probably something obscene, e.g. “So-and-so fucked your wife!”}

The friend acted with licentious boldness and playful mockery toward the man’s wife. While risky under tyrannical sex regulations, such behavior sexually excites women much more than dull, formal politeness or contractual proposals for affirmative consent.

With even more astonishing insight, Kekaumenos recognized that seductive skills matter more than even the Byzantine Emperor’s great power and wealth. Kekaumenos told the story of a man he knew personally:

There is a man, distinguished and rich, a dignitary, and very well-born, owning fine residences in the City. I am leaving out his name intentionally, for he’s still alive. This man has a well-born wife, whose brother is a general. She is beautiful to look at. Originally she was even more beautiful in soul. She was adorned with understanding and virtue, and instructed in the Holy Scriptures, too.

The Emperor, having often heard about her, sent people to her, in his desire to have an affair with her. He promised dignities and many other benefits for her and for her husband. Her husband didn’t know of it. Then the Emperor sent him off as judge of a theme {a Byzantine political division}. When the Emperor couldn’t persuade her, he gave up.

After three years, her husband the judge came back from the theme. He was delighted with the state of his own home. But then a good-looking and distinguished young man in the provinces pretended to be a relation of hers. He spoke to her husband in the Palace: ‘I’, he says, ‘am a relation of that lady there, the judge’s wife’. After saying much more to him, he made friends with the judge. The judge invited him to his home. The young man deceived him and became his close friend. Why do I choose to speak at length? He had an affair with the judge’s wife.

She who was once happy is now wretched. When this event became known, her husband and her relations were in the grip of dejection and grief, or rather disgrace. The young man boasted about it as if about one of the labours of Hercules. What the Emperor and promises of dignities and riches could not achieve, was done by intimacy and a friend.

The young man was bold, impudent, and cocky. He thought of himself as a woman’s man like the legendary Lothario Hercules. His seductive skills made him more alluring to a another man’s wife than the Byzantine Emperor himself.

Many men seek social status and wealth to improve their mate prospects. That’s foolish. Learning from medieval women’s love poetry and being a jerk is a more propitious way to a woman’s loins.

[2] Kekaumenos, Consilia et Narrationes {Advice and Anecdotes} 54.12-3, 16.11-2, from Greek trans. Roueché (2013). The unnamed author’s father and grandfather are named Kekaumenos within the text. The text’s author has come to be conventionally named Kekaumenos (also transliterated as Cecaumenos). Editors earlier entitled the text the Strategicon, but now it is more commonly called the Consilia et Narrationes.

Kekaumenos addressed the text to his sons, but that seems to have been a convention of advisory rhetoric. Consilia et Narrationes is “not the work of an ill-educated man.” Roueché (2003) p. 27. Kaukaumenos apparently studied the first part of the progymnasmata. Id. pp. 33-7. Consilia et Narrationes seems to have been intended for general circulation.

Consilia et Narrationes apparently was written about 1075. It has survived in only one manuscript, Moscow Synodalis 298 (Vlad. 436) ff. 136v – 229r. That manuscript was produced near Trebizond, probably in the 14th century. Roueché in her introduction provides a full discussion of the important philological issues associated with this work.

[3] This observation has been quoted out of context for crude, anti-meninist point-scoring. That practice is a pervasive, deplorable feature of much recent gender scholarship. See, e.g. Galatariotou (1984) p. 67.

Magdalino, Paul. 1989. “Honour among Romaioi: the framework of social values in the world of Digenes Akrites and Kekaumenos.” Byzantine and Modern Greek Studies. 13 (1): 183-218.