Men tend to idolize women. So it was for Sir Gawain and Sir Kay when they, along with Bishop Baldwin, found themselves spending a cold, rainy night in the Carle of Carlisle’s castle in Inglewood Forest. Both Kay and Gawain ardently desired the Carle’s beautiful wife. The Carle didn’t regard either man as a true friend. But Gawain’s sexual dynamism served redemption through enabling an intimate relationship with the Carle’s lovely daughter.

Dinner in the Carle’s castle began awkwardly. The Carle was a gigantic man with a fearsome reputation and a wild appearance. He kept a bull, a boar, a lion, and a bear as house pets. Before the meal began, he drank wine from a nine-gallon golden goblet. At the Carle’s table, Bishop Baldwin ate ravenously. Sir Kay’s focus went elsewhere:

Sir Kay sat on the other side
opposite the Carle’s wife, so full of grandeur.
She was so fair and white,
her arms small, her waist elegant,
her eyes green, her brows bent,
in courtesy she was perfect.
Her complexion was red, her cheeks rosy —
a fairer woman might not exist on earth,
nor one lovelier in appearance.
She was so glorious and so festive
I cannot describe her clothing,
because she was so festively attired.

{ Syr Key was sett on the tother syde
Agenst the Carllus wyfe so full of pryde,
That was so feyr and whytte:
Her armus small, her mydyll gent,
Her yghen grey, her browus bente;
Of curttessy sche was perfette.
Her roode was reede, her chekus rounde,
A feyrror myght not goo on grounde,
Ne lovelyur of syghte.
Sche was so gloryis and soo gay:
I can not rekon her araye,
Sche was so gayly dyghte. }[1]

Kay found himself idolizing her:

“Alas,” thought Kay, “for you noble lady,
that you should be so lost
with such a foul man!”

Though lacking in courtly manners, the Carle was personally perceptive. He turned to Kay:

“Sit still,” said the Carle, “and eat your meat.
You think more than you dare speak,
surely I affirm to you.

After that implicit threat, Kay prudently stopped gazing at the Carle’s wife and started eating.

Known for his courtly manners, Gawain hadn’t even sat at the table. He was standing in the hall waiting for the host to invite him to table. Rather than invite Gawain to table, the Carle commanded him to throw a spear at his face. The Carle assured him that he wouldn’t be hurt. As a courteous guest, Gawain did as his host bade. He hurled a large spear with all his might at the Carle’s face. The spear shattered against the wall behind the Carle and didn’t harm him.

Then the Carle took Gawain by the hand and sat him at the dinner table next to the Carle’s wife. She captivated Gawain:

So much was his love fixed on her,
that during the dinner he wasn’t able
either to drink or to eat.

{ So moche his love was on her lyght,
Of all the soper he ne myght
Nodyr drynke nor ette. }

The Carle said, “Gawain, comfort yourself,
for sin is sweet, and that I see.
Surely I affirm to you:
she is mine though you wish she were yours.
Leave such thoughts and drink your wine,
for you shall not have her.”

{ The Carle sayde, “Gawen, comfort the,
For synn ys swete, and that I se.
Serten, I the hete,
Sche ys myn thou woldyst wer thynn.
Leve seche thoghttus and drenke the wynne,
For her thou schalt nott geytt.” }[2]

Gawain felt ashamed of himself. Courtly manners compel men to feel ashamed for appreciating a woman’s beauty as Bishop Nonnus did. 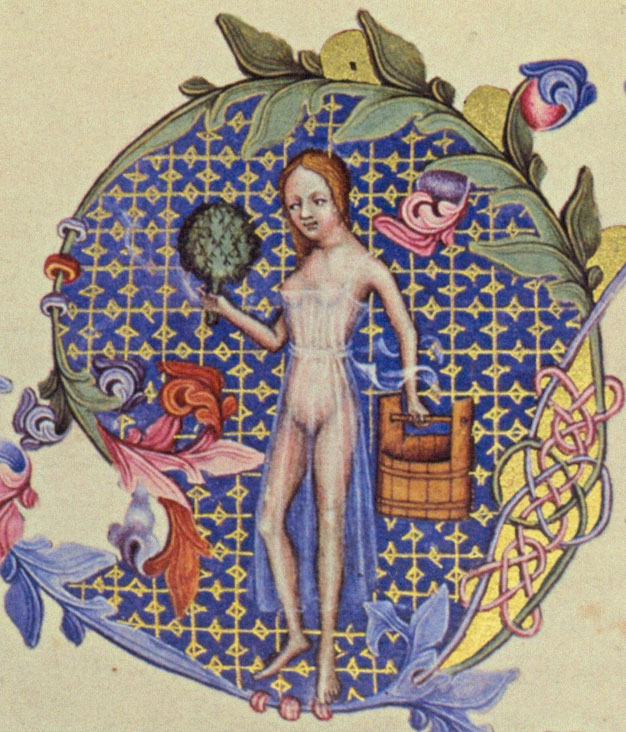 The Carle’s beautiful, golden-haired daughter came and played on a harp for the guests. She sang songs about the interrelation of love and King Arthur’s armed deeds. The food and her songs made them happy. Men have long foolishly associated love and war. Love should be a freely given gift, not a battle.

After dinner, the Carle led Gawain to his bed. It was a bed covered with a golden bed-spread. It was the bed of the Carle and his wife:

When the bed was made with joy,
the Carle bade his own lady to get in,
that lady of lovely appearance.
A squire came for a private deed,
and he unarmed Gawain there.
Duly he was undressed.
The Carle said, “Sir Gawain,
go take my wife in your two arms
and kiss her in my sight.”

To this extraordinary request of him as a guest, Gawain responded with courtly manners:

Sir Gawain answered him at once,
“Sir, your bidding shall be done,
certainly indeed,
or kill or slay or knock me down.”
To the bed he very soon went,
fast and with good vigor,
for the softness of that lady’s side
made Gawain do his will at that time.
When Gawain would have done the private deed,
then Gawain took the Carle’s good heed,
for then the Carle said, “Whoa there!
That love-play for you I forbid.”

{ Syr Gawen ansswerde hyme anon,
“Syr, thi byddynge schall be doune,
Sertaynly in dede,
Kyll or sley, or laye adoune.”
To the bede he went full sone,
Fast and that good spede,
For softnis of that Ladys syde
Made Gawen do his wyll that tyde;
Therof Gawen toke the Carle goode hede.
When Gawen wolde have doun the prevey far,
Then seyd the Carle, “Whoo ther!
That game I the forbede.” }

“But Gawain, seeing that you have done my bidding,
some kindness I must show you in some thing,
insofar as I may.
You shall have one just as bright
who shall play with you all this night
til tomorrow’s day.”
To his daughter’s chamber he went just then,
and bade her arise and go to the knight,
and not hinder him from love-play.
She dared not against his bidding do,
but to Gawain she came very soon
and softly beside him lay.

{ “But, Gawen, sethe thou hast do my byddynge,
Som kyndnis I most schewe the in anny thinge,
As ferforthe as I maye.
Thow schalt have wonn to so bryght
Schall play wytt the all this nyghte
Tyll tomorrowe daye.”
To his doughtter chambur he went full ryght,
And bade her aryse and go to the knyght,
And wern hyme nott to playe.
Sche dorst not agenst his byddynge doun,
But to Gawen sche cam full sone
And style doun be hyme laye. }

Since no later than the reception of Virgil’s account of Dido and Aeneas, women have been credited with being dynamic and always adapting to circumstances. Gawain here showed that men can be just as adaptable as women are. He enjoyed a long night of love-play with the Carle’s daughter.

“Mary, mercy,” thought that lady bright,
“Here has never come such a knight
of all that have been here.”

{ “Mary, mercy,” thought that Lady bryghte,
“Her come never suche a knyght
Of all that her hathe benne.” }[3]

Late the next day Gawain left the Carle’s daughter in bed and went to Mass. She lamented:

“Mary, mercy,” said that lady bright,
“Where shall I see any more this knight
who has laid my body so tightly?”

Men have long been disparaged sexually for being like dogs. But Gawain’s sexual dynamism brought joy to the Carle’s daughter, saved Gawain and his companions from being killed, and led to a redemptive end.

The Carle had been killing all the men who visited his castle. The Carle’s violence against men represents the horrible medieval reconception of chivalry as men enduring lethal danger. Gawain’s courtly manners and sexual dynamism prompted the Carle to renounce his domestic killing of men.[4] The Carle had a great abbey constructed in Carlisle where grey monks continually chanted and prayed for all the men the Carle had killed. Gawain and the Carle’s daughter wed.

Completing the story of Sir Gawain and The Carle of Carlisle is left to the world. Gawain had the Carle dubbed a knight of King Arthur’s Round Table. What sort of horseman was he? The story doesn’t say.

Why do I scatter lascivious poems in all my little books,
you ask? I ward off the insipid grammarians!
Were I to sing of the courageous arms of the noble emperor,
or of the religious deeds of godly men,
how many of your wretched censurings would I receive, suffering corrections!
To how many young boys would I become a torment?
But now, since moist kisses dictate my poems
and much penis tingles in my verse,
let read me a young man about to please an unwed girlfriend,
and a sweet young woman about to please a new man,
and whoever from the band of pleasant poets
likes to play away leisure time with lively delights.
From these joyful games go far away, savage
grammarians, and stay your unjust hands,
lest a young man, beaten and crying because of their soft charms,
strongly desires rough earth be heaped upon my bones.

The romance begins with a laudatory characterization of Sir Gawain. Among his plaudits:

He was as meek as a maid in a bower
and also stiff in every battle.

Sir Gawain and The Carle of Carlisle vv. 4-5. These verses plausibly characterize Gawain as being like the knight who endured sexual coercion through the justice system in The Wife of Bath’s Tale. These verses also suggest that Gawain handled well men’s sexual burden of performance. Cf. Pollack (2009) pp. 21-2.

The Middle English word carl / carle is cognate with churl and indicates a crude, physically violent man. The Carle of Carlisle is rich and lives in a castle. That associates him with nobility. But he explicitly declares himself to be without courtesy. Others also note his lack of courtesy. The meaning of courtesy and courtly manners are a central issue in this romance.

[2] The Carle’s responses to Kay and Gawain gazing at his wife invoke medieval proverbs: “you think more than you dare speak”; “sin is sweet”.

[3] The Carle’s daughter refers to Mary, the mother of Jesus. The romance ends with a Christian prayer:

Jesus Christ, bring us to your bliss
above in heaven, on your throne.
Amen.

Sir Gawain and The Carle of Carlisle, vv. 659-61. Compared to the U.S. today, medieval Europe was relatively liberal and tolerant of different moral perspectives.

The central question of The Wife of Bath’s Tale and The Wedding of Gawain, ‘what do women most desire,’ never occurs to the Carl of Carlisle.

Pollack (2009) p. 19. The Carle correctly perceived Kay’s and Gawain’s unspoken desire for his wife and his daughter’s unspoken desire for Gawain. Under gynocentrism, men and women are acutely concerned about “what women most desire.” In that sense, that question probably occurred to the Carle, just as it did to Pollack.

Discounting medieval women’s desire and agency to support modern gynocentric mythology, Brandsen declared that the Carle’s wife and daughter are “apparently without a will of their own” and that “the two women are essentially the same person.” Brandsen (1997) p. 303. These are ludicrous claims. Moreover, at a rhetorical level, one might recognize that the Carle’s highly privileged wife and daughter live in a castle. They surely enjoy many more rooms of their own than did all laboring English men.

[4] Lindsay (2012), Ch. 3, discusses how Sir Gawain and The Carle of Carlisle questions chivalry’s support for violence (violence against men).

[5] Janus Secundus, Epigrams 1.58, Latin text and English translation (modified) from Price (1996) p. 89. This poem has echoes of Catullus, Martial, and Horace. Secundus was born in The Hague, Netherlands. He florished as a writer from 1528 to 1536, when he died. He became a well-known author in the sixteenth through eighteenth centuries. For a freely available Latin text of all of Secundus’s works, Burmannus & Bosscha (1821).

Scott-Robinson, Richard. 2008. “Sir Gawain and the Carle of Carlisle: translated and retold in Modern English prose.” From The Blue Book of Wellow. Eleusinianm. Online.