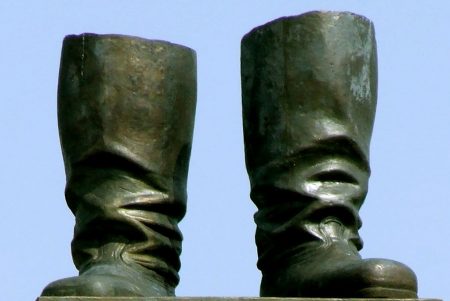 Nightingale, you say what you will,
you say that women shall have me killed —
to Hell one that would!

In the thirteenth-century poem The Thrush and the Nightingale, two birds debate women in relation to men. Their debate isn’t about whether men should allocate more of their resources toward reducing violence against women or toward increasing the number of women business leaders. The nightingale praises women for helping men and bringing them joy. The thrush disparages women for betraying men and hurting them. Both those positions can hardly be expressed in current public discussion. That’s not surprising. The Thrush and the Nightingale includes a figure of the jackboots of gyncentrism. With far more men imprisoned today than during the Middle Ages, freedom of express is now much more limited.

The nightingale depicts all women as wonderful and strong, but not in an independent way. He declares:

It’s shameful to malign the fair!
They’re courteous and debonair;
be still, I counsel you.
There’ll never be a sin too strong —
brought about by right or wrong —
for woman to undo.

They gladden those sunk deep in woe,
whether highborn men or low;
they’re sly and most discreet.
What good a world without them, then?
For they were made to comfort men;
there’s nothing else so sweet.

{ Lo, it is shome to blame leuedy,
For hy beth hende of corteisy;
Ich rede that thou lete.
Ne wes neuere bruche so strong
Ibroke with righte ne with wrong
That [wimon] ne mighte bete.

For any man who trusts them they
will turn upon and soon betray.
As mild as they appear,
they’re fickle, false on every hand.
They stir up grief in every land;
Better if none were here!
…
Of woman’s praises I’ll hear nought.
They’re treacherous and false of thought,
and that’s one thing I know.
However fair and bright their hue,
their minds are crafty and untrue.
For years I’ve found it so.

Not all women are like that. In medieval society, tagging that phrase onto every utterance about women wasn’t necessary to avoid being lynched by the college educated. In making a general claim about women, the thrush brings forth the examples of King Alexander, who was enthralled to his mistress; Adam, who obeyed Eve in the garden of Eden; the sad situation of Sir Gawain; and of course Samson and Delilah. On the other side, the nightingale triumphs by invoking Mary, the mother of Jesus.

More important than the polarized claims in The Thrush and the Nightingale is a stanza threatening the thrush with imprisonment. Even with relatively liberal freedom of expression in medieval society, the nightingale threatens the thrush with institutionalized violence against men:

Come to them with your spite for women
and soon they’ll lock you up in prison,
and there you’ll sadly wait,
and all the lies you ever told yet,
down in the dungeon you’ll soon forget,
and shame shall be your fate.

{ Come thu heuere in here londe,
Hy shulen don the in prisoun stronge,
And ther thou shalt abide;
The lesinges that thou hauest maked
Ther thou shalt hem forsake,
And shome the shal bitide. }

The Thrush and the Nightingale ends with capitulation, withdrawal, and apathy. The thrush surrenders to the power of the nightingale’s claims:

I now swear by His holy name
that nevermore will I cast shame
on either maid or wife,
and from this forest I’ll soar high
and care not henceforth where I fly,
and wander all my life.

Facing jackboots of gynocentrism, too many men have similarly given up. Men should not throw away their lives in wrongful shame. With fidelity to truth and right, men should fight in their own way, on their own ground, and with deep respect for the value of their own lives.

The Thrush and the Nightingale was authored in England sometime about or before the last quarter of the thirteenth century. For overviews of the poem, Walker (1974) pp. 92-7, Lambdin (1991), Parker (2002) pp. 78-84, and the Encyclopedia of Medieval Literature. The author of The Thrush and the Nightingale wrote within a learned, multilingual context and produced a poem that shares literary heritage with the matter of Alexander. Bridges (2016) pp. 104-5.

The Thrush and the Nightingale has survived in two manuscripts: Oxford, Bodleian Library, MS Digby 86, ff. 136vb-138rb (copied in the last quarter of the thirteenth century) and Edinburgh, National Library of Scotland Advocates MS 19.2.1 ff.279va-vb (the Auchinleck manuscript, copied about 1330; glossed text here). In the Digby manuscript, the poem is headed in Old French “Here begins the contention between the thrush and the nightingale {Ci comence le cuntent parentre la Mauuis et la Russinole}.” The Digby and Auchinleck versions differ somewhat in spelling and have some minor differences in words. More importantly, the Auchinleck version is lost after l. 74 because of lost pages in that manuscript. The Middle English text above is from the Digby manuscript, as transcribed and edited by Millett (2003).

The modern English translation above comes mainly from Gardner (1971) pp. 177-82. Gardner’s modernized version includes alliteration and rhyme important in the original language. It doesn’t follow the original English language closely, but preserves well the meaning. I have silently made minor adaptations for readability, as well as a few important changes to follow more closely the meaning of the original English.

Nightingale, say all you please;
You say that women will end my ease.
I curse them all aloud!

That translation greatly dulls the threat and the defiant response. Above I’ve provided an alternate, close translation. My translation is consistent with that of Millett (2003), yet is closer to the Middle English and preserves more of the alliteration and rhyme.

For l. 30, the Digby manuscript has mon {one} where the Auchinleck manuscript has wimmen {women}. The former word doesn’t make good sense in context. Millett wisely emends the Digby text to wimon {woman}. The poem apparently here alludes to the woman Mary, the mother of Jesus, the “new Eve”, who undid the earlier sin of Eve and Adam. Gardner has “women.” I’ve changed that to “woman.”

For l. 127, “Come thu heuere in here londe,” Gardner has “Come to men with your spite for women.” The reference to coming to “men” isn’t in the original. The close translation of Millett (2003) for this line is “If you ever come into their territory.” In context, “their” is best understood as women. In Gardner’s version of l. 127, I’ve replaced “men” with “them.” That preserves the meter and the internal rhyme, and more accurately suggests coming to women, not men.

In accordance with dominant gynocentric ideology, scholars have disparaged the thrush for antifeminism and misogyny. Walker (1974) pp. 92, 95, Franklin (1978) p. 310, Parker (2002) p. 78. This medieval debate poem becomes in such readings a dull, tendentious contention between what Parker labels a “confirmed misogynist” and a “stout defender of the value of women’s love.” Parker (2002) pp. 78-9. Medieval readers were not so obtusely indoctrinated. They created interesting, sophisticated debates, not ridiculous ones. One scholar who missed the point observed, “critics have simply misunderstood the point of the argument.” Lambdin (1991) p. 5. Scholars have almost wholly missed the point of medieval literature of men’s sexed protest.

Scholars have largely ignored the poem’s powerful representation of jackboots of gynocentrism. The only scholar to mention it characterized it abstractly as “an interesting threat, elliptical and obscurely menacing.” Parker (2002) p. 83. With respect to the conclusion of the poem, another scholar declared, “the Thrush goes into exile as fit punishment for his slanders.” Walker (1974) p. 94. Medieval literature has critical value for beyond such ignorant, benighted, and bigoted readings.

[image] Bronze sculpture of Stalin’s jackboots in Memento Park (Szoborpark), near Budapest, Hungary. Derived from photo made in August, 2007, by Ines Zgonc. Via Wikimedia Commons.

Parker, Cynthia Margaret. 2002. Contentious Birds: The Owl and the Nightingale and Other Poems in a Singular Middle English Verse Tradition. Ph.D. Thesis in English, The University of Auckland (New Zealand).

Walker, D. B. 1974. Hic herde a strif bitweies two: A study of the principal Middle English Debate Poems with special reference to the Bird Debates and the Devotional Debates, their analogues and sources. Ph.D. Thesis in English. University of Canterbury (New Zealand).