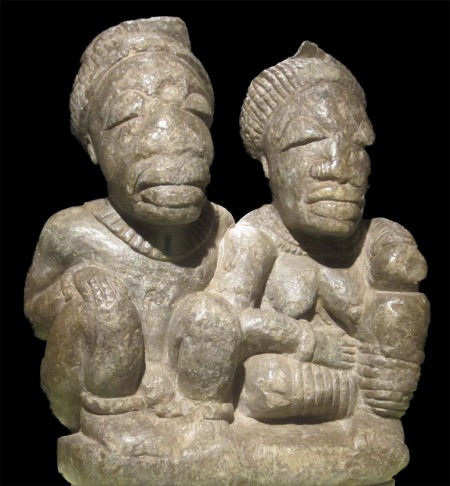 In Decameron 9.9, two men, Melisso and Giosefo, happened to meet while traveling along a road.  They were both going to seek Solomon’s wisdom:

Solomon’s exalted reputation for miraculous wisdom had spread to practically every corner of the earth, and it was well known that he was incredibly liberal in sharing it with anyone wishing to verify it in person {and} many people would flock to him from all over the world in order to ask his advice about their most pressing and perplexing problems. [1]

Giosefo’s problem was with his wife:

{Giosefo} was off to seek Solomon’s advice on how to deal with his wife, for she was the most stubborn, most perverse woman alive, and he could not make her budge from her contrary ways by means of prayer or flattery or anything else.

Melisso’s problem was with his neighbors:

I spend my money giving banquets and entertaining my fellow citizens.  Any yet, the strange and curious thing about it is that despite all this, I’ve never found anyone who wishes me well.  And that’s why I’m going … to get advice about what can be done to make people love me.

Solomon dispensed wisdom like a busy professional seeking to maximize case processing fees.  Melisso entered Solomon’s office and briefly recounted his problem.  Solomon said “Love.”  Melisso was then immediately ushered out.  Giosefo was then processed similarly, except Solomon said “Go to Goosebridge.”  “Love” is abstract advice.  “Go to Goosebridge” is a highly particular directive.  Neither advice is closely related to either Melisso’s problem or Giosefo’s problem.  But Solomon’s paired advice is generally related to loving and serving, as are Melisso and Giosefo’s paired problems.

The Lord gave me wisdom in my mouth, such that no one is like me in all the ends of the earth. [2]

He who has bad neighbors praises himself. [3]

Solomon’s statement is a first-person rephrasing of second-person and third-person biblical characterizations of Solomon.  Marcolf’s response chides Solomon’s self-glorification with an allusion to the Christian commandment, “You shall love your neighbor as yourself.”  Solomon’s brusque wisdom service in Decameron 9.9 similarly isn’t consistent with loving service.[4]

Emilia, who narrates Decameron 9.9, introduces the story in a way that aligns her and women with serving in the counterparts of loving and serving.  Emilia begins Decameron 9.9 with a travesty of Ephesians 5:22-33:

Amiable ladies, if the order of things is viewed from a sound perspective, it will quite quickly become apparent that Nature, custom, and the laws have decreed that the vast majority of women are subservient to men and must be controlled and governed by them at their discretion.

Licisca knew better about women’s power.  The stories of Day 7, and the near-suppression of them, also provides a better window into social reality.  Just two stories earlier on Day 9, Pampinea told the story of Talano and his wife:

She was more beautiful than all the rest, but surpassed them even more in being irritable, obstinate, and ill-tempered to the point that she utterly refused to follow other people’s advice and never approved of anything anyone else did.  All this was a heavy burden for Talano to bear, but he put up with it since he had no choice in the matter. [5]

I have been led to make these observations {the travesty of Ephesians 5:22-33} — though it is not for the first time — by what Pampinea said a little while ago about Talano’s obstinate wife to whom God meted out the punishment her husband was unable to visit upon her.

Talano did not seek to punish or hurt his wife.[6]  Emilia’s claims about “Nature, custom, and the laws” contrast sharply with the nature, behavior, and legal privilege of Talano’s wife.  Emilia’s claim that women should serve men out of fear of punishment describes service without love.

The paired narrative conclusions in Decameron 9.9 don’t unifying loving and serving.  Returning home, Giosefo and Melisso happened upon a muleteer brutally beating his mule at Goosebridge.  Giosefo concluded that Solomon meant to advise him to beat his wife.  Giosefo brutally beat his wife.  His wife then compliantly served Melisso and Giosefo the dinner that they wanted.  Neither Giosefo’s nor his wife’s actions express love.  When Melisso returned home, he told a wise man of Solomon’s advice.  The wise man explained:

He could not have given you a truer or better piece of advice.  You yourself know that you don’t really love anyone and that you do all that entertaining and all those favors for others not because you feel for them, but simply to show off.  You should love, therefore, as Solomon told you, and then you, too, will be loved. [7]

Melisso followed the wise man’s advice and came to be loved.  Melisso loving others is just a different tactic than he serving them meals.  Decameron 9.9 ends with Giosefo being served by his wife and Melisso being loved by his neighbors.  Those endings, like Emilia’s introduction, don’t realize a Christian understanding of unified loving and serving.

The ridiculous figure of Solomon and the entanglement of the brigata in Decameron 9.9 pushes forward the reader as a counterpart.  Solomon’s advice to Melisso and Giosefo paired abstract ideal with specific directive.  The reader must fit together loving and serving across that range, but more convincingly and more clearly than Solomon did.  The reader must fit together the paired wisdom of Ephesians 5:22-33, from its abstract allegory to its real social context, as Emilia did not.

[1] Giovanni Boccaccio, Decameron, Day 9, Story 9, from Italian trans. Rebhorn (2013) pp. 739-40.  Boccaccio, like Dante, chose numbers deliberately.  The numerical symmetry of 9.9 is a detail consistent with the theme of putting together counterparts.  All subsequent quotes, unless otherwise noted, are from id. pp. 738-43.

[4] The Christian ideal of loving service is prominent in Jesus washing his disciples feet after his triumphal entrance into Jerusalem. John 13:1-15.  That ideal is rooted in Hebrew scripture.  Deuteronomy 11:13 pairs loving and serving: “loving the Lord your God, and serving him with all your heart and with all your soul.”

[5] Decameron, Day 9, Story 7, from Italian trans. Rebhorn (2013) pp. 730.  Talano’s lack of choice suggests that he could not legally divorce his wife.  Even if he could divorce his wife, he may have faced unrecognized de facto discrimination that made such action impractical.  In the U.S., men initiate only about 30% of divorces and face family courts highly biased against men.

Wife, although I’ve never had even one good day with you because of your ill temper, all the same I’d still be sorry if anything bad happened to you, and therefore, if you’ll take my advice, you won’t leave the house today.

Id. p. 731.  Unlike Decameron 9.7, the Archpriest of Talavera described how to use a wife’s recalcitrance to advance the husband’s interests.

[7] Status-seeking, self-interested generosity is a subtext of Decameron 10.3.

[image] Couple (mahen yafe style), probably sometime from 14th to 17th century, stone, Sierra Leone, in a private collection.  My photograph of the sculpture on display in “Visions from the Forests: The Art of Liberia and Sierra Leone” at the National Museum of African Art, Washington DC, through Aug. 17, 2014.