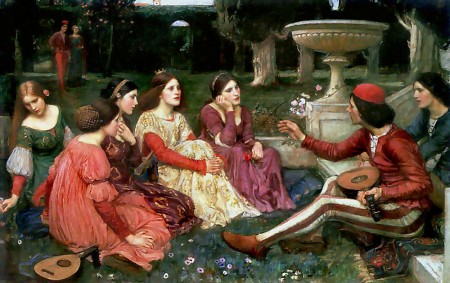 The men’s beloved ladies were in the church in a group of seven ladies.  Those ladies had decided to leave the city.  They had decided that they needed worthy men to guide them and serve them.  Then the ladies saw the three men.  The ladies briefly debated the men’s merits.  The ladies:

unanimously agreed that the men should be called over, told about their intentions, and asked if they would like to accompany them on their expedition. [1]

The men “stood gazing at the women.”  Perhaps the women summoned them, and the men felt unworthy to approach.  The men apparently were sensitive to being mocked by the ladies.  In any case, Pampinea, who was a blood relative to one of the men, sprang into action.  She went over to the men:

After giving them a cheerful greeting, Pampinea explained their plan and asked them on behalf of all the women if, in a spirit of pure, brotherly affection, they might be disposed to accompany them.

What more could any men want than having a two-week country vacation “in a spirit of pure, brotherly affection” with women they intensely love?  Surely Boccaccio and other men of his time guffawed at that.  Today, in our time of greater ignorance and less freedom of thought, some incorrigibles still know enough to laugh at men being friendzoned.  The rest of today’s readers don’t perceive the mockery:

At first the young men thought they were being mocked, but when they saw that Pampinea was speaking in earnest, they replied happily that they were ready to go.

Boccaccio surely was mocking the young men.  They “saw” Pampinea “speaking in earnest.”  They were “ready to go” … in a way.  Inability to perceive such mockery helps to sustain the gynocentrism that operates underneath socially constructed belief in male dominance.

Boccaccio’s playful, ironic introduction to the men and women of the Decameron’s brigata critiques misunderstanding of Christian loving and serving.  The women seek from men not love but service and praise:

Remember, we are all women, and every one of us is sufficiently adult to recognize how women, when left to themselves in a group, can be quite irrational, and how, without a man to look after them, they can be terribly disorganized. … man is the head of woman, and without a man to guide us, only rarely does anything we do accord us praise. [2]

The phrase “man is the head of woman” comes from Ephesians 5:22-33, a favorite passage among misandristic mis-interpreters.  A sex dichotomy structures that passage in Ephesians:

Christian scripture makes clear a unitary imperative that women and men, husbands and wives, should love and serve one another.  In addition to pointing to a “great mystery” of divine creation, the Ephesians passage in its pastoral sense suggests that wives were more likely to fall short in service to their husbands, and husbands, in Christian love for their wives.  Ephesians counsels women to serve men.  That’s significant to the Decameron’s women seeking men to serve them.  Ephesians counsels men to love women.  That’s what the Decameron’s men were already doing, at least in the dolce stil novo.  The men were friendzoned because they failed to recognize the women’s lack of appreciation for reciprocal love and service.

[1] Giovanni Boccaccio, Decameron, Day 1, Introduction, from Italian trans. Rebhorn (2013) p. 18.  Subsequent quotes, unless otherwise noted, are from id. pp. 17-19.  The seven women and three men formed the group (brigata) that narrates the stories of the Decameron.

[2] Readers have typically failed to understand the women’s demand for men’s services.  The women made the plans to leave the city.  They sought men to guide them in the sense that rich Westerners seek Sherpas to guide them on their quest to summit Mt. Everest.

[image] John William Waterhouse, A Tale from the Decameron; 1916, oil on canvas, in the Lady Lever Art Gallery.  Thanks to Wikipedia.